Black Bear vs Gorilla. What is the Difference?

Black bears have the advantage of weight, they are 100-250 pounds heavier than gorillas but gorillas are much larger, stronger, and louder than black bears.

Gorillas are intelligent enough to use tools like rocks. Gorillas are also much more agile than bears, bears even being heavier can’t lift weights, they push and hits with less force whereas gorillas can bend steel and lift tons of weights.

Bears can sometimes be faster than gorillas but they can’t be swift so won’t be able to change directions. So a gorilla beats the black bear in terms of agility and strength. 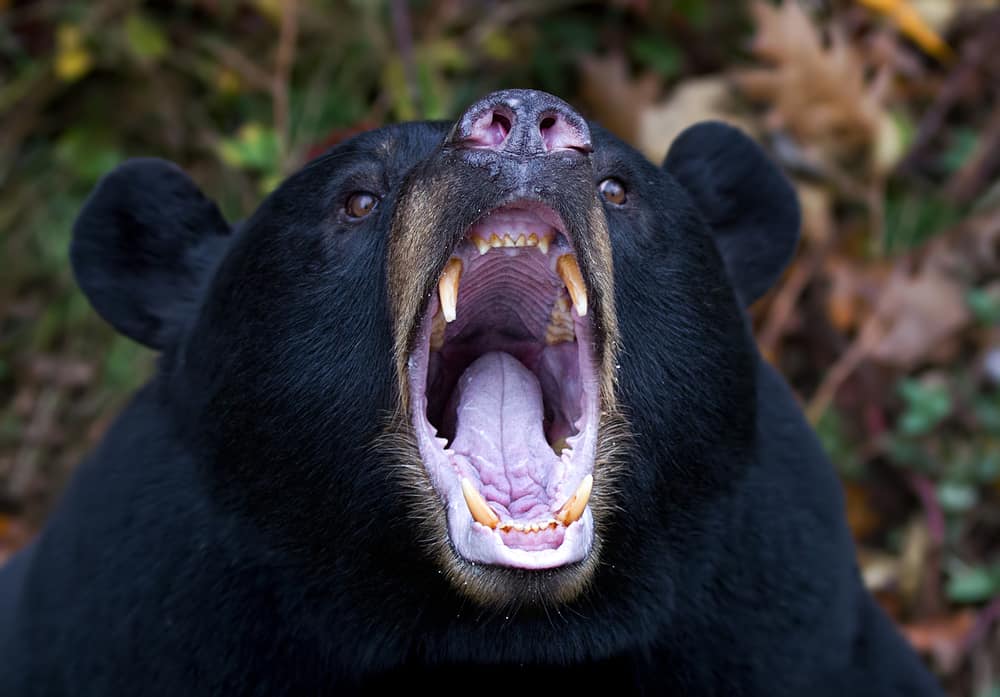 Black bears are also known as American Black Bear, whose scientific name Ursus Americanus most common bear from the family of Ursidaefound in the forests of North America, including parts of Mexico. The American black bear consists of only one species, but its colour varies, even among members of the same litter.

Though the black bears are known as carnivorous, but they mostly follow an omnivorous diet. Their diet ranges from fruits and plants to the carcasses of dead animals. In some areas, they kill timid animals like moose calves and deer fawns.

Gorillas on the other hand are much more like humans, they are also known as gentle giants. They show more human-like emotions like laughter and sadness. Gorillas share 98.3% of their genetic code with humans, making them our closest cousins after chimpanzees and bonobos. 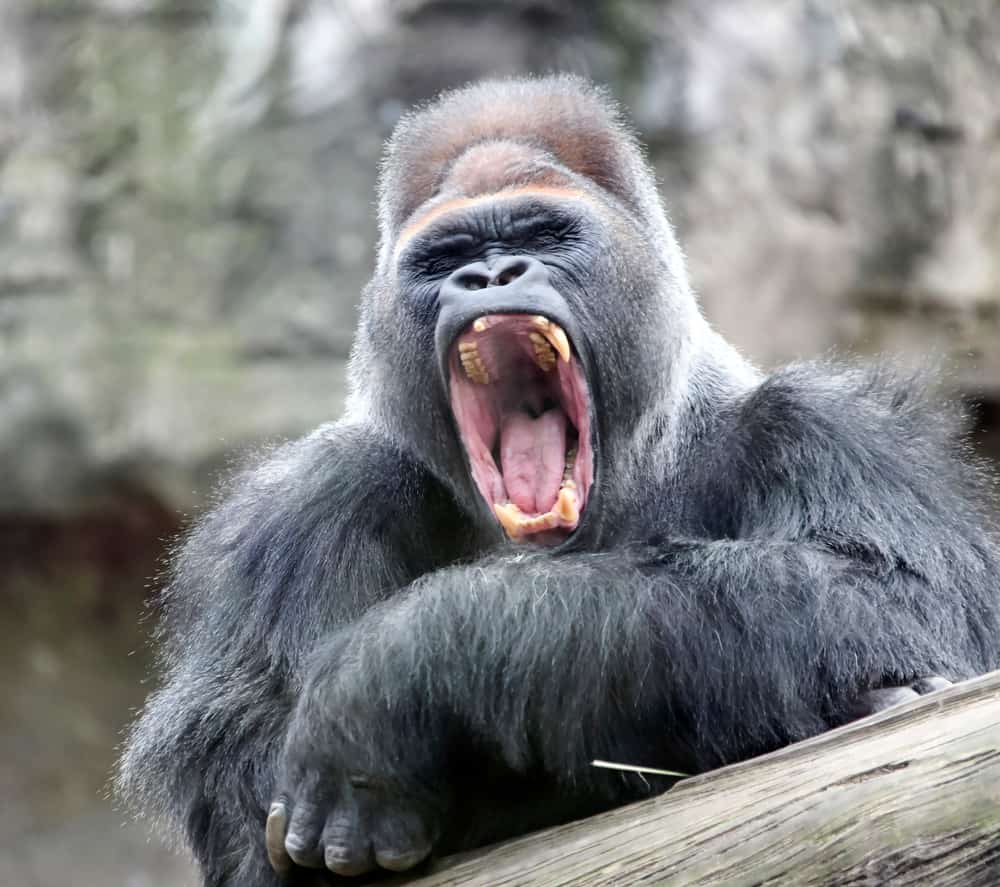 The largest of the great apes, gorillas are stocky animals with broad chests and shoulders, large, human-like hands, and small eyes set into hairless faces. Just like humans, gorillas were also social creatures, they always live in groups which are led by a dominant adult male. Though they are generally known to be gentle giants, they can be dangerously violent if manhandled or threatened. But same as black bears their attacks on humans are mostly motivated by defensive acts. 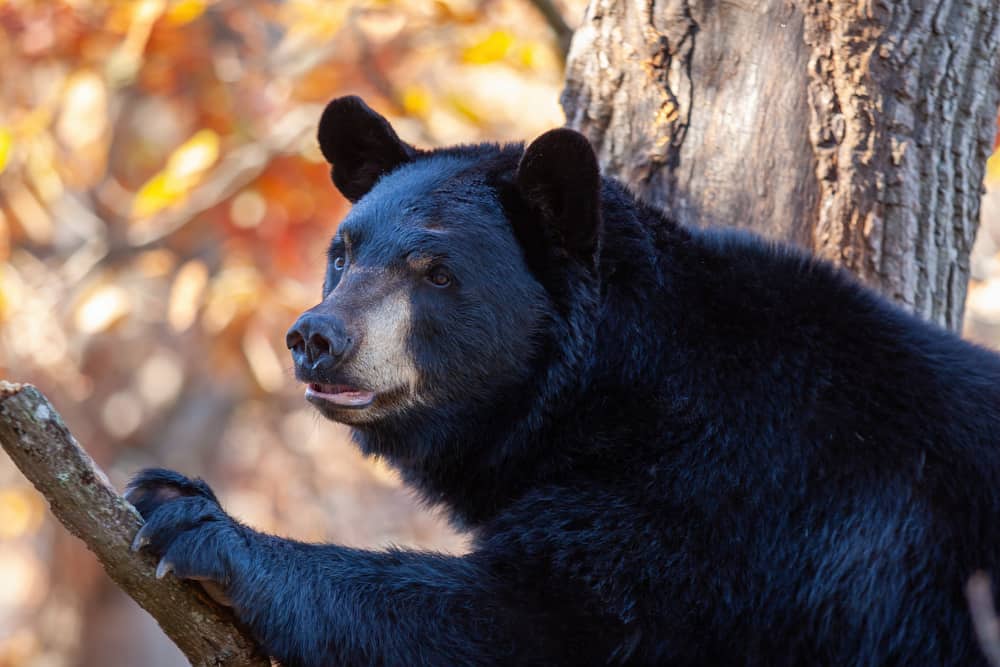 Research shows that black bears are intelligent such that they can screw latches and open doors. They live mostly in thick forests, but they can adapt to live in different environmental conditions.

Their bodies are unique in appearance, just leave alone their black color. You can well draw their distinction from their skull, which has a significant length of 23.4 cm to 35cm, and with a pointed face.

They have a longer foot than other bear species, which have a length ranging from 13.7cm to 22.5cm. While standing, a black bear’s height is up to a meter tall, and it can weigh about 227kg to 272kg (500lbs-600lbs). Its body is big and has features to climb trees. Its short claws enable this ability. In addition, the skin of a black bear is dense and thick, a feature that enables it to survive through the winter.

The facts about the black bear 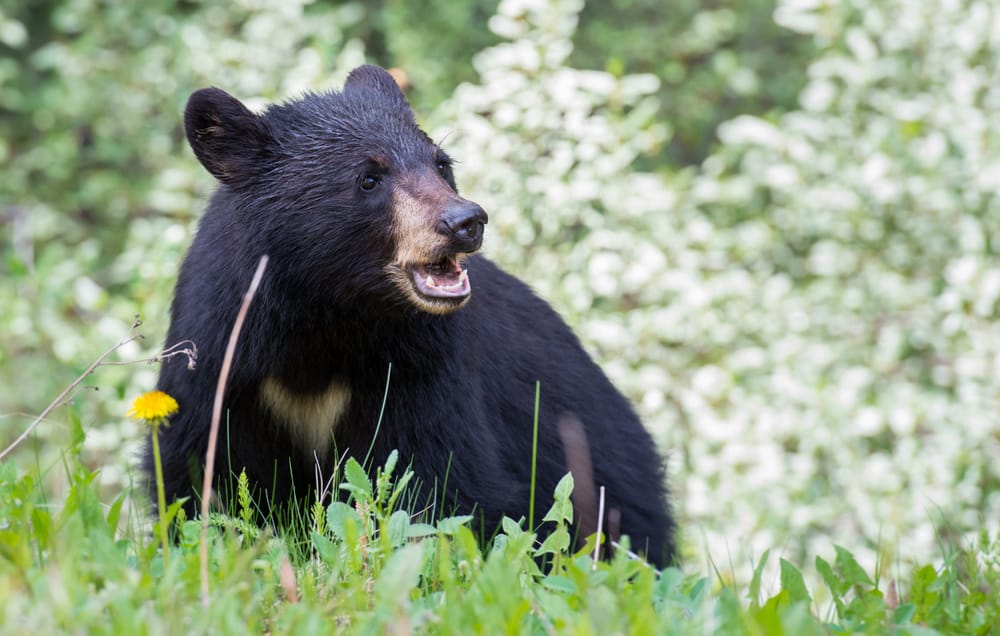 Black bears are omnivorous, meaning they eat a variety of food. They can feed on nuts, plants, honey, fish, salmon, moose, meat, and insects.

Black bears are hunters and like hunting younger deer and other mammals for food. These animals also know how to swim; this can be seen significantly while catching fish and salmon.

Black bears are more characterized by their independent life; they don’t like living in a group. They are more aggressive if kept in a closed place or chain-cage as they have no freedom to live a private life.

These animals can hunt human beings for food, which is a good reason they can’t be kept as pets. Mother black bear doesn’t even take long feeding her cubs; in a short period of one or two years, they get separated too for each to live independently.

Black bears love traveling long distances searching for food, especially male ones; they can travel up to 4,490sqKm searching for food. Whenever they encounter any danger, they depend on themselves with high mechanisms such as climbing trees. Like any other animals, black bears are a food source for other animals; that is why they are more defensive. Their cubs are more prone to danger as they are vulnerable to some other animals. Coyotes, wolves, bobcats, cougars are some animals that eat younger black bears, even adults.

Black bears have a behavior of communicating through making marks on trees using their teeth and claws. 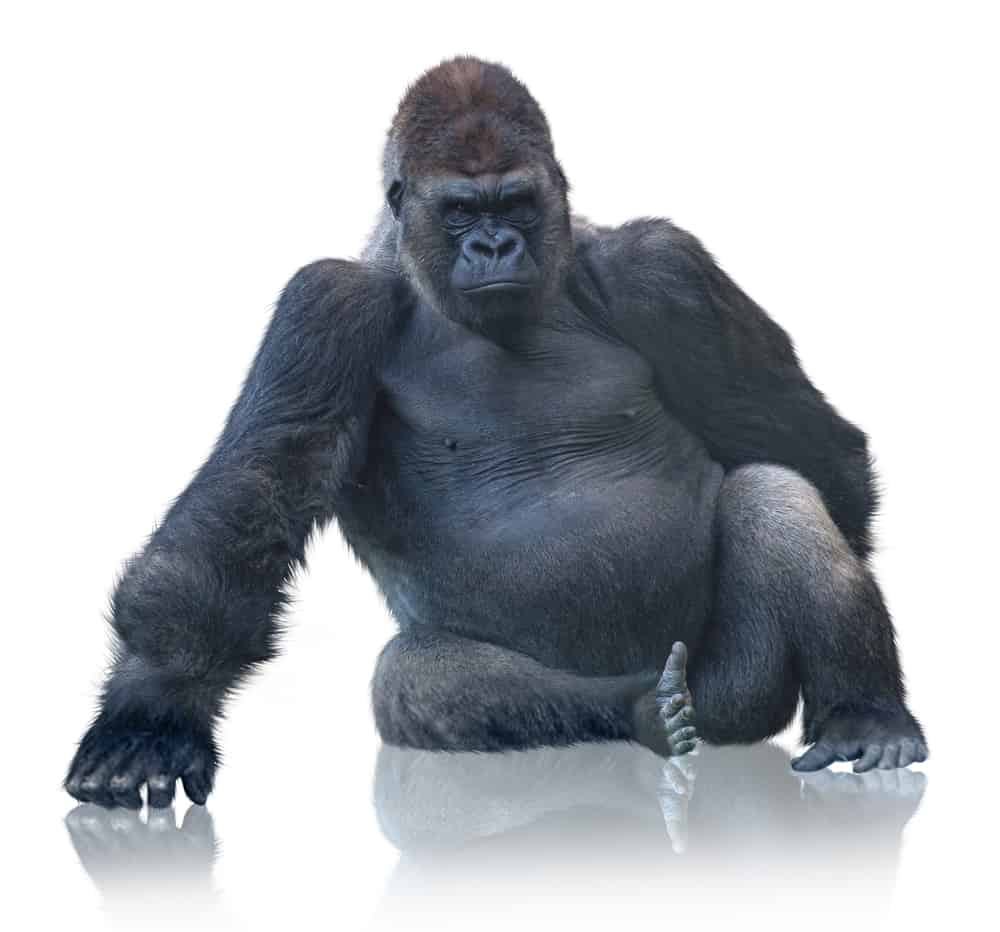 Gorillas have a black coat, while others have a silver coating. They have short, thin, gray-black to brown-black hair covering the whole body apart from the face. Young ones of zero to four years have a small white clump of hair on their ram, distinguishing them from the rest. Mature silverback male gorillas have a white hair saddle across their backs. Adult male gorillas have conical-shaped heads because the bony crests on top and back of the sky-Gorillas have longer arms than legs. Just like other primates, gorillas have unique fingerprints. 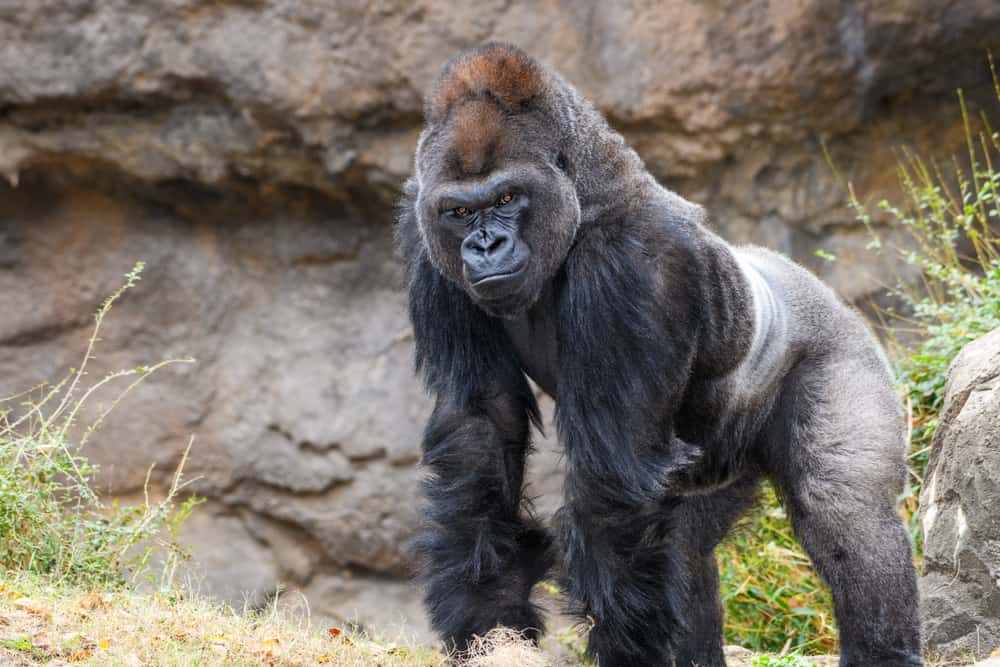 Male gorillas are larger than female gorillas; they weigh up to two hundred and seventy-five kilograms. Wild gorillas have an average weight of one hundred and eighty kilograms, with the females weighing half of this weight. Males have stocky trunks, and when standing, they usually reach 1.75 meters high with their knees bent. On the other hand, females are generally 1.25 meters tall. This gender dimorphism is crucial in mating and group structure. 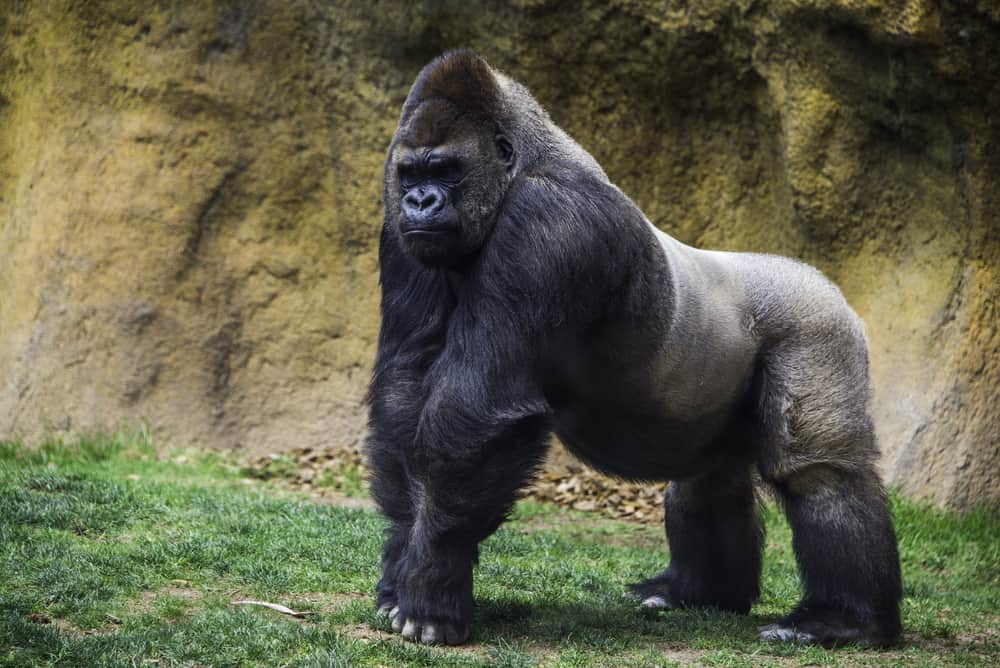 Their hands are proportionately large, with nails on all fingers and huge fingers. Western gorillas can stand upright but walk in a quadrupedal, hunched style, with hands curled knuckles touching the ground.

Males are larger and while their sexes patterned or colored differently.

Wild gorillas live for around thirty-five to forty years, some captive ones living to fifty years.

Gorillas are peaceful animals, amiable and shy unless they are threatened. But male gorillas stand upright and bang their chests to frighten or in showing off their strength. They growl loudly and can be so dangerous when attacked or annoyed. They demonstrate aggression by storming towards regarded invaders and rarely hit the intruder but instead rush past and attack again.

Predation on gorillas is rare and uncommon because of their large and imposing sizes. Instead, young gorillas fall prey to large carnivores or raptors.

Although gorillas are not fond of fighting, they can retaliate when attacked; their main weapons include claws, strength, and bite. Both gorillas have similar fighting styles; they stand on their hind legs and engage face to face with their attackers. While gorillas hit their grips and bite, bears swipe their paws and bite.

Black bear and gorilla, although both are big, they differ in their appearance. They can not stay in the same area or forest as each has its own way of lifestyle. Again, a gorilla can be food for a black bear, although it is not easy for a bear to face the gorilla due to its overwhelming size.