Grizzly bears love to eat meat and are one of the largest species of brown bear. It is classified as the third largest meat-eating animal in North America. They eat:

What do grizzly bears eat?

It may be surprising to learn that grizzly bears are omnivores, which means that they eat a wide variety of food, both from plant and animal origin. Therefore, it is interesting to observe how the grizzly bear catches the fish, they use their strong claws to do it.

They can be really quiet, waiting for the appropriate moment to strike, then with a sharp claw strike, they will possess their fish to eat. Bear cubs and young adult bears attempt to do catch their fish many times, it is a skill that requires patience, even for them.

Grizzly bears like other types of meat too. It ranges from small rodents to taking down an adult moose. They are particularly skilled when it comes to hunting, and they have speed and strength at their advantage. They also consume nuts, leaves, tree bark and seasonal fruits.

One of Grizzly bears favourite foods is salmon, and Alaskan rivers grant plenty of good food for them. Throughout the spawning of the salmon, during the summer, many grizzly bears are concentrated in these particular areas. 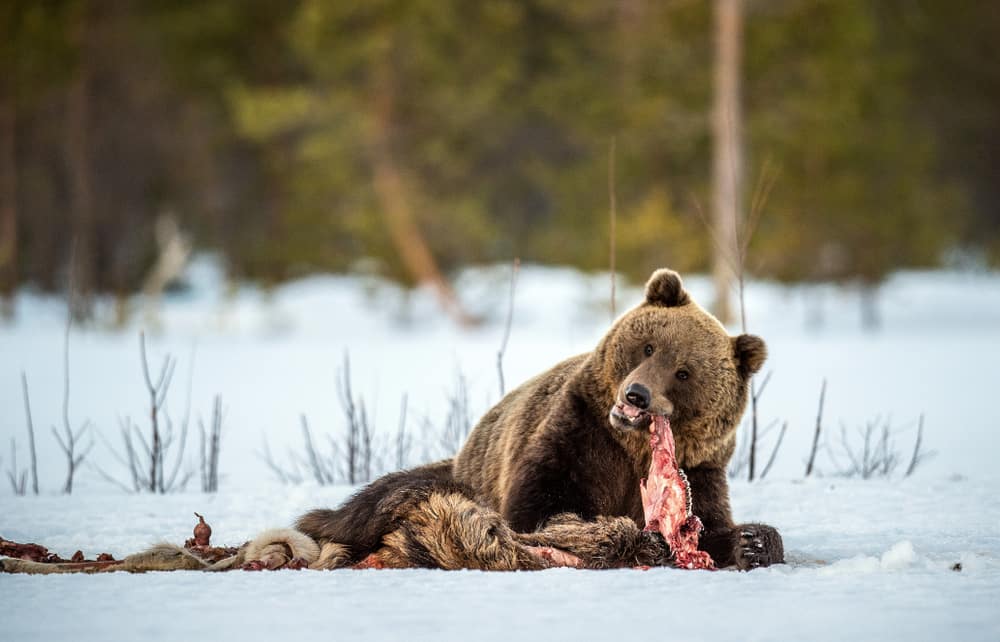 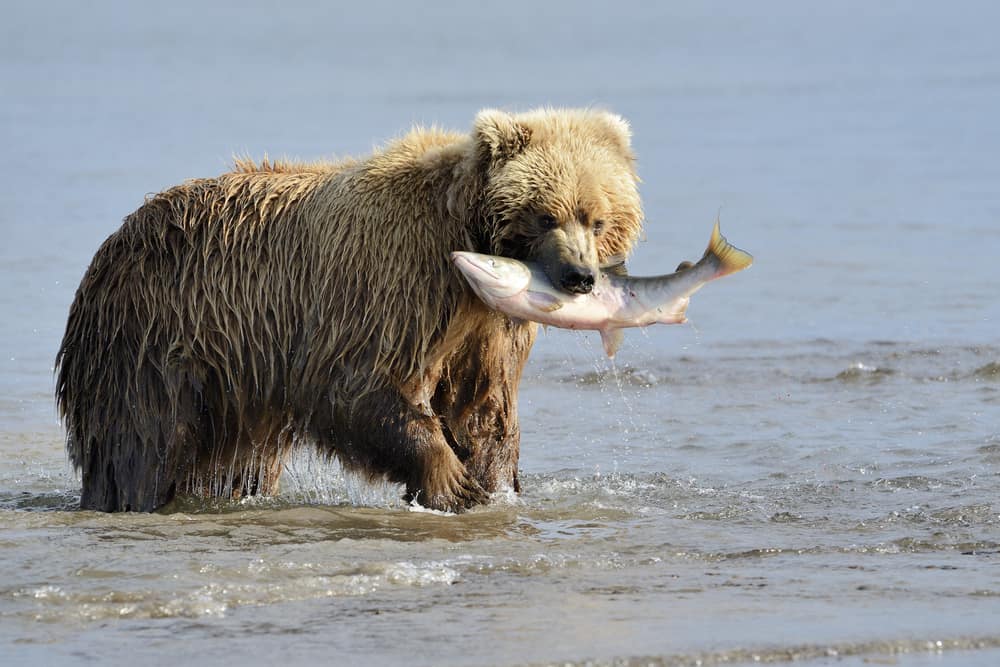 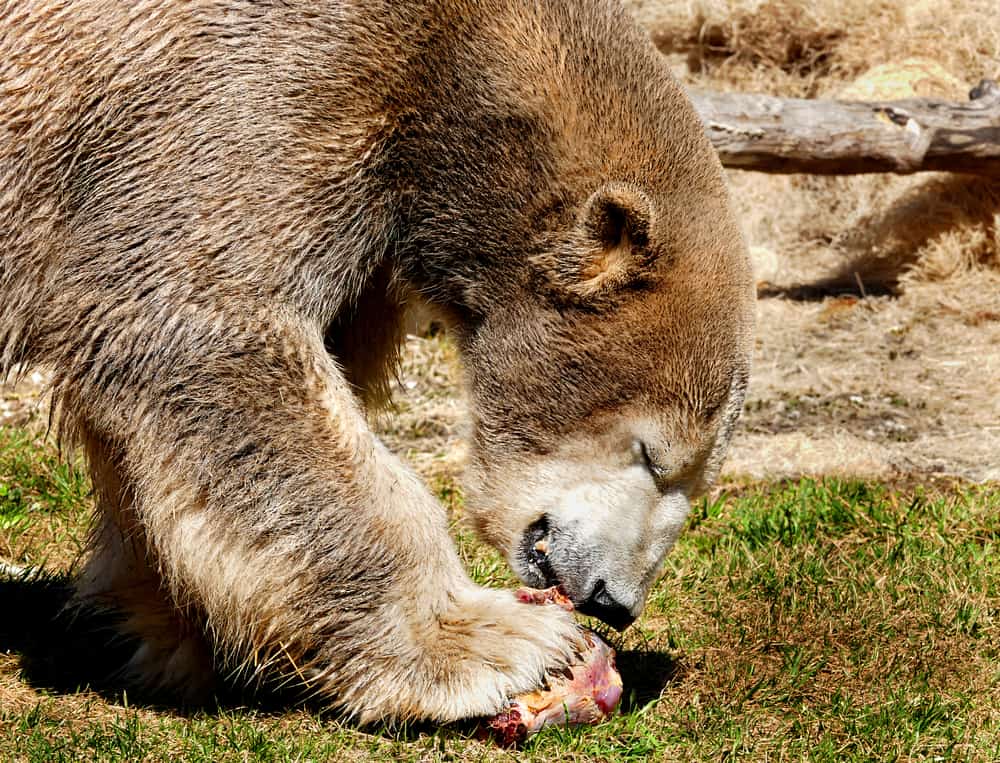 Do they eat deer or wolves?

Certainly, bears do eat deer. Nevertheless, a bear would more often hunt and devour newborn and young deer rather than adult ones. It is true that meat might not be their primary option when it comes to feeding. Still, around 30% of their diet consist of meat, even including a recently dead deer that might still be edible.

We must bear in mind that a pack of wolves are seen more as rivals rather than food.

When these two collide, probably it would be because there is another animal on the menu. But, weirder things have been witnessed in the wilderness, sometimes a bear might fight with a wolf and eventually eat him and vice versa.

How much do they eat?

Just by looking at them, we can imaging that these huge creatures must need a big amount of food in order to maintain their mass. It is estimated that grizzly bears may eat about 40 kg of food just in one day. This is a lot for us, but we must not forget that his diet consists of pretty much everything they may find nutritious.

Before they enter into hibernation season, grizzly bears try to eat as much food as they can. They reach a height of around one meter. The female is smaller, with a marked contrast when they are adults. Its weight ranges between 130 and 550 kg.

Where do they live? 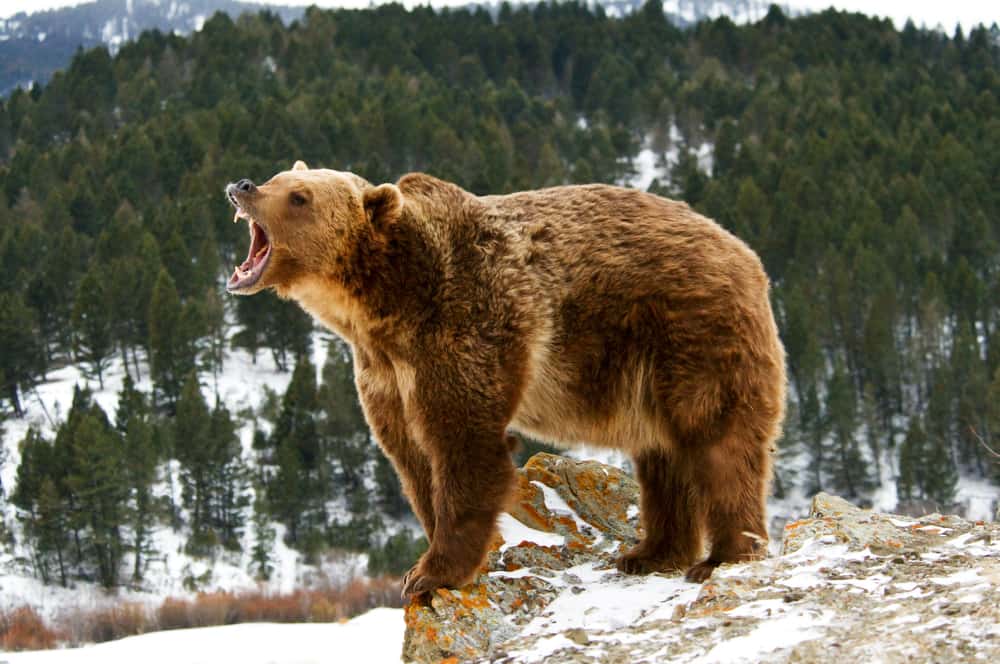 Grizzly bears inhabit Alaska, Canada, and the northwestern United States. Coniferous forests such as pines and firs abound in these regions. Although their life is closely tied to the wood of these trees, grizzly bears also need grasslands, scrublands, and riparian vegetation.

The most important population of these bears is found in Alaska, where they find abundant food for their needs. In addition, here they have large areas to wander. These bears spend the day walking from one place to another in search of food, so their territories must be very wide.

It is brown in appearance, although some may be blondish or black. On the back, they have grey hairs. In cold climates, their fur shields them from certain types of insects. In the summer they lose part of that hair, mainly in the thickest areas.

A noticeable anatomical characteristic of a grizzly bear is a hump-like muscle on its back. This grants him power and strength. The head is large and the jaws very powerful. On the concave face, there is a depression between the eyes. It has impressive retractable teeth and claws, which it uses to kill prey and dig lairs.

They are solitary animals. They only come together in mating season and when it is the season of the salmon. These bears spend the winter hibernating (sleeping) in solitary caves.

Grizzly bears mark the trees with their claws and do not use their speed to escape from their enemies but attack with force. In full hibernation, females have 1 to 3 cubs. The females take care of them for 2 years and then the young become independent.

What to do if you encounter a grizzly bear

Grizzly bears attack humans only because they feel threatened not for fun or money like humans do. These bears consider humans aggressors, but as competitors, not prey.

As a wild animal, this mammal will attack if it is threatened, so we must know a series of basic questions when facing this delicate situation; our survival is hanging by a thread, so we have to be cold and, as far as possible, keep calm.

Encountering a bear in the wild may sound unreal to people who live in big cities. But those who intend to go on an adventure trip or enjoy a few days in the mountains should seriously consider this possibility. Knowing what to do if you come across a bear is a great way to stay calm and act smart.

Bears are used to roaming freely in their natural habitat, either in search of food or just to be distracted. If you get in the way of a bear, you will get its attention in a rather negative way. The animal may interpret your posture as a challenge or simply get irritated by not making progress.

If you come across a bear, be sure not to block its path. And if you need to move to free its path, do it very slowly, without sudden movements.