What Do You Call a Baby Coyote? [Cute Pictures]

A baby coyote is called a pup. If there are more than one pup they are called a litter. 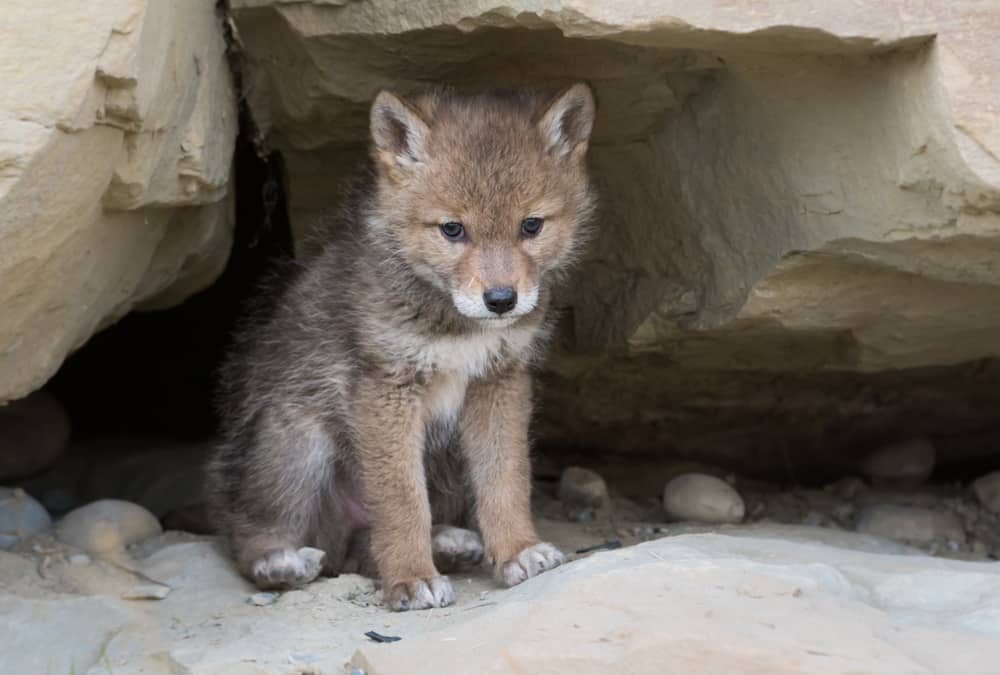 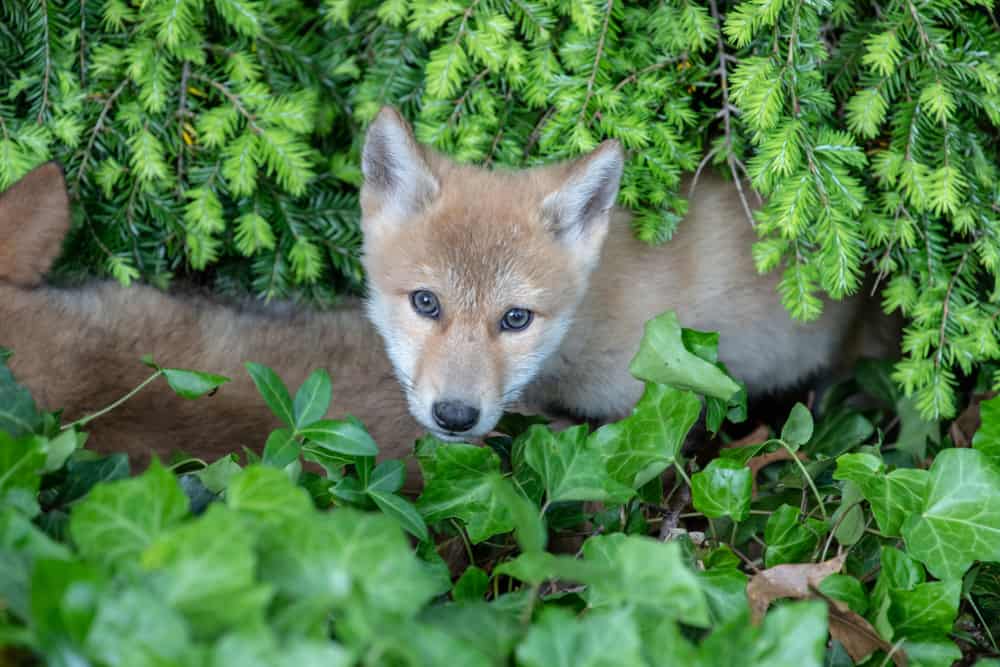 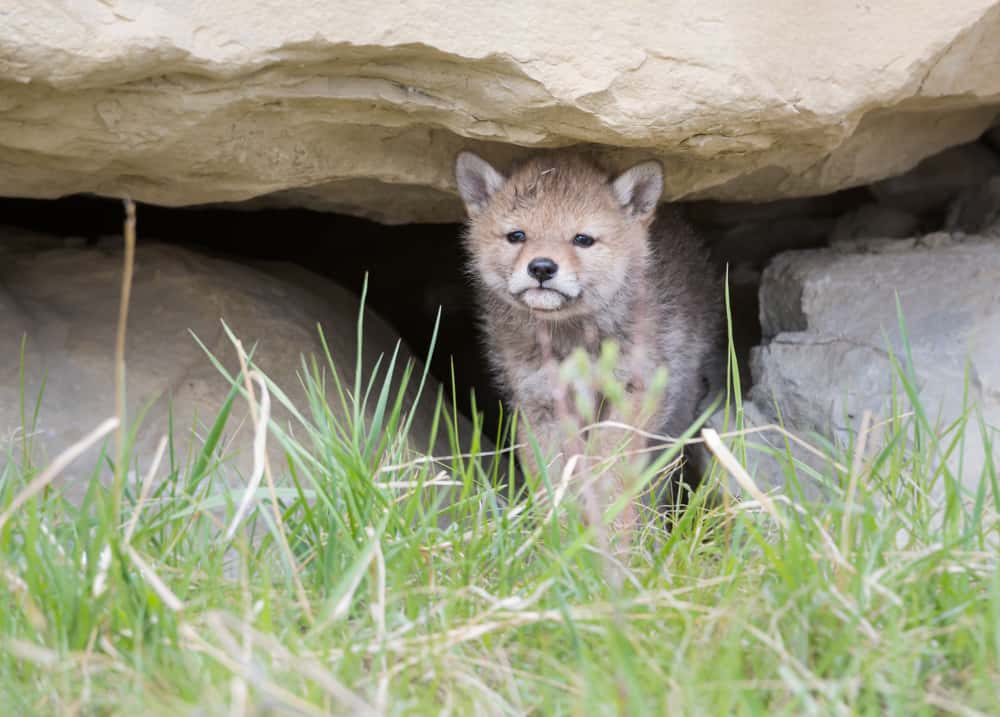 The pups are born weighing about 0.4 to 1.1 lb. There are born in dens or under ledges. You may not distinguish them from a young fox or wolf.

Pups depend only on milk for about 10 to 15 days. Their eyes open after 10 days, while their teeth start erupting after 12 days, and after 21 days the young coyotes have premolars. The parent coyotes start supplementing the food for the young pups after about 15 days.

Young ones of coyotes fight each other and start establishing dominance, and after that, they start playing at the age of four weeks, and by that time the teeth are fully functional.

The young coyotes follow their parents when they go hunting and learn hunting tactics. The pups may leave the family by August after they have matured and learnt how to hunt, mostly at the age of eight months. 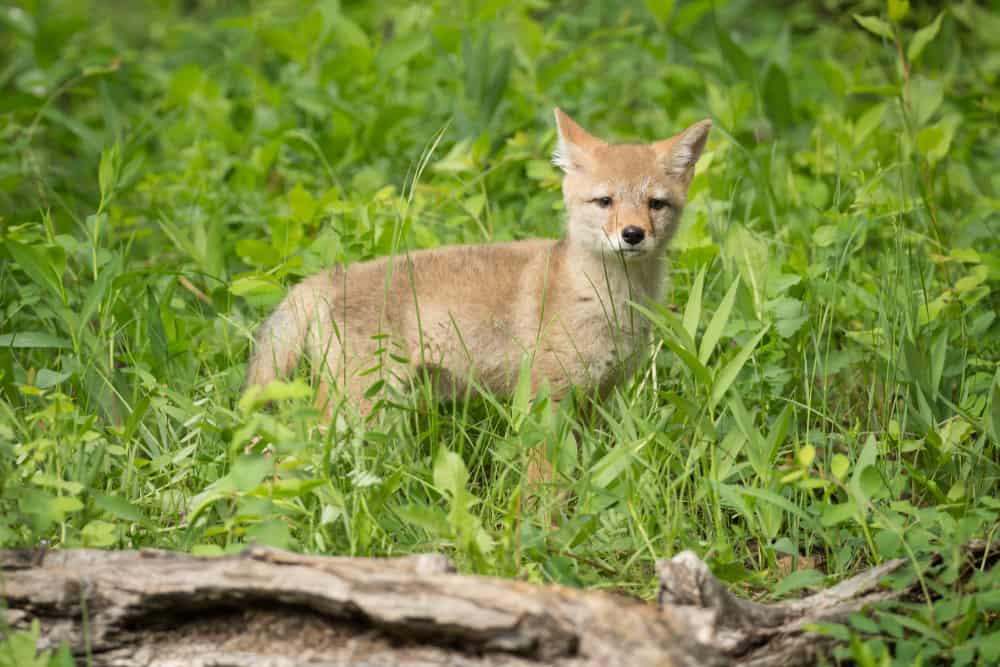 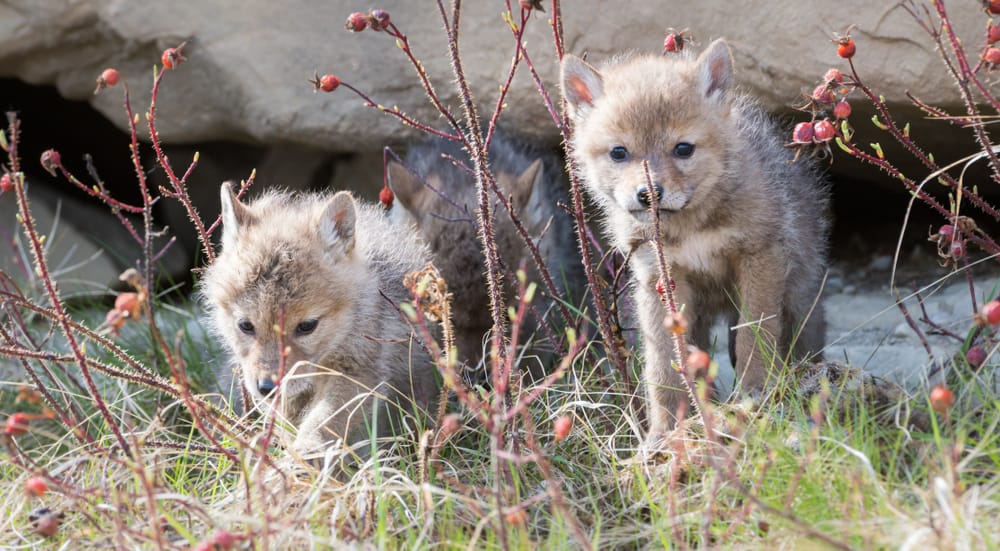 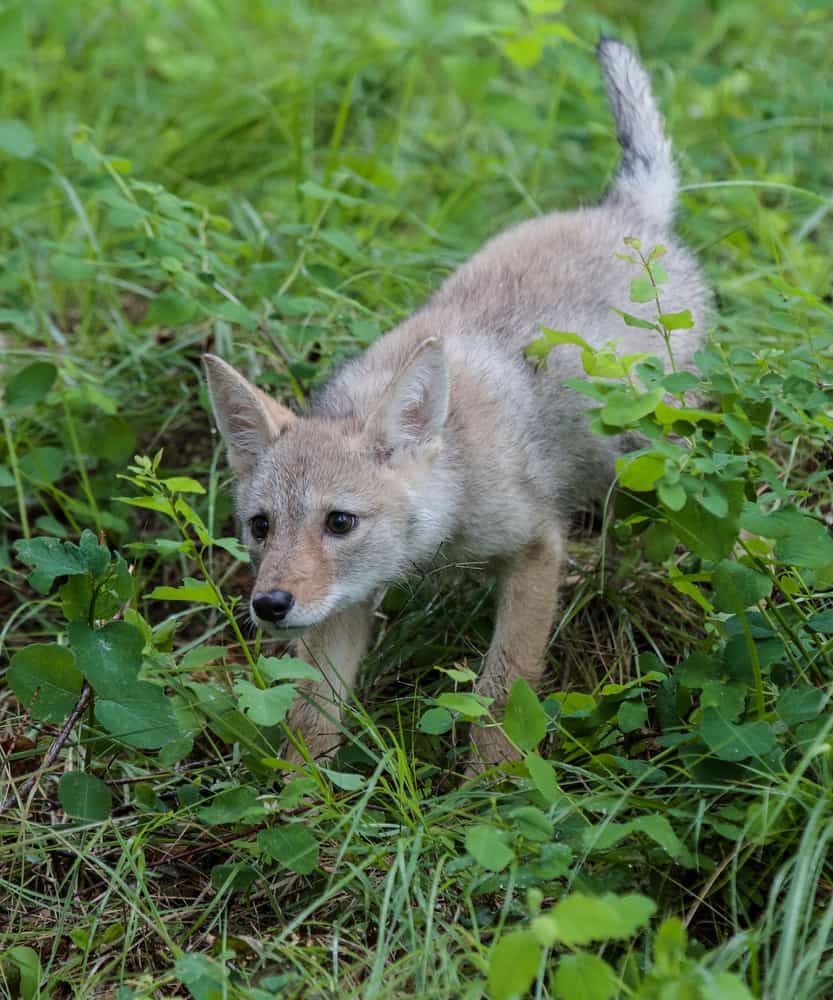 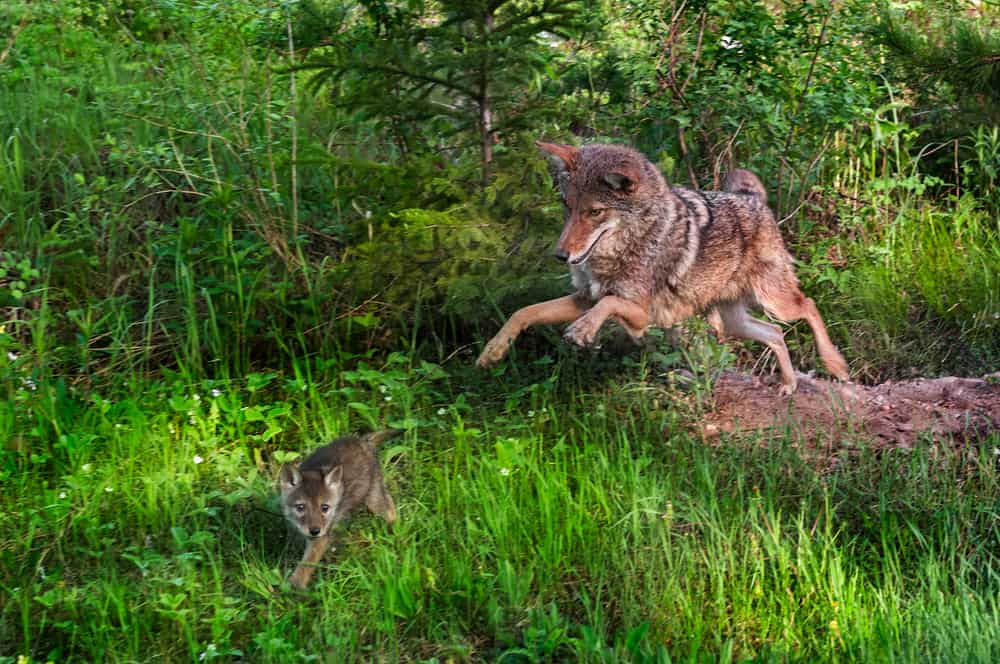 What do you do when you see a young coyote?

If you find a pup alone, you shouldn’t take it with you because in many cases they are not abandoned. They are left behind as the parents go hunting.

When you take them, you deny them a chance to be with their families where they learn survival tactics better than when they are with them. It’s only advisable to pick a pup coyote if it’s injured and call the relevant authority to pick them up. If you stay with the coyote, it may not be able to learn survival tactics after you leave it alone.

Increased interaction and people feeding coyotes have made them lose the fear of human beings. This has made coyotes become aggressive and attack people in different occurrences, mostly children under the age of 10 years.

Although the threat isn’t severe to humans, coyotes are dangerous to livestock and pets. There are many cases of missing sheep, goats, and cattle where there’re coyotes. Coyotes are many in comparison and more connected with loss of these domestic animals.

In the United States, 90,000 coyotes are killed every year in an attempt to protect livestock. Coyotes are trapped, shot, or poisoned by government agents. Individual coyotes have a high tendency to attack livestock than a wolf.

Coyotes attack the livestock by biting their throats and making the animal suffocate or die because of blood loss. If the domestic animal is small, the coyotes bite their heads or back causing damage to their skull or bones. Coyotes can carry the animal or eat it leaving behind skin and skeleton. If the coyote is so hungry, it may eat the whole animal and leave only large borne of the animals.

Coyotes attack pets too, such as cats and dogs. In many instances, they kill cats and continue to feed on the food that is given if the owner doesn’t know that their cats are dead. They are attracted to pets’ foods. They also attack dogs and in many cases cause injury to the dog if they don’t kill them. Only large dogs are known to drive away coyotes and at times kill them.

The reason we think that pup coyotes are left is that the parents may take longer than expected to return, but it doesn’t mean that they won’t come back. By picking them, you make the situation worse. Don’t think that you can help them because in rehabilitation centers they are only fed but not taught how to feed themselves by hunting and interacting with other animals. 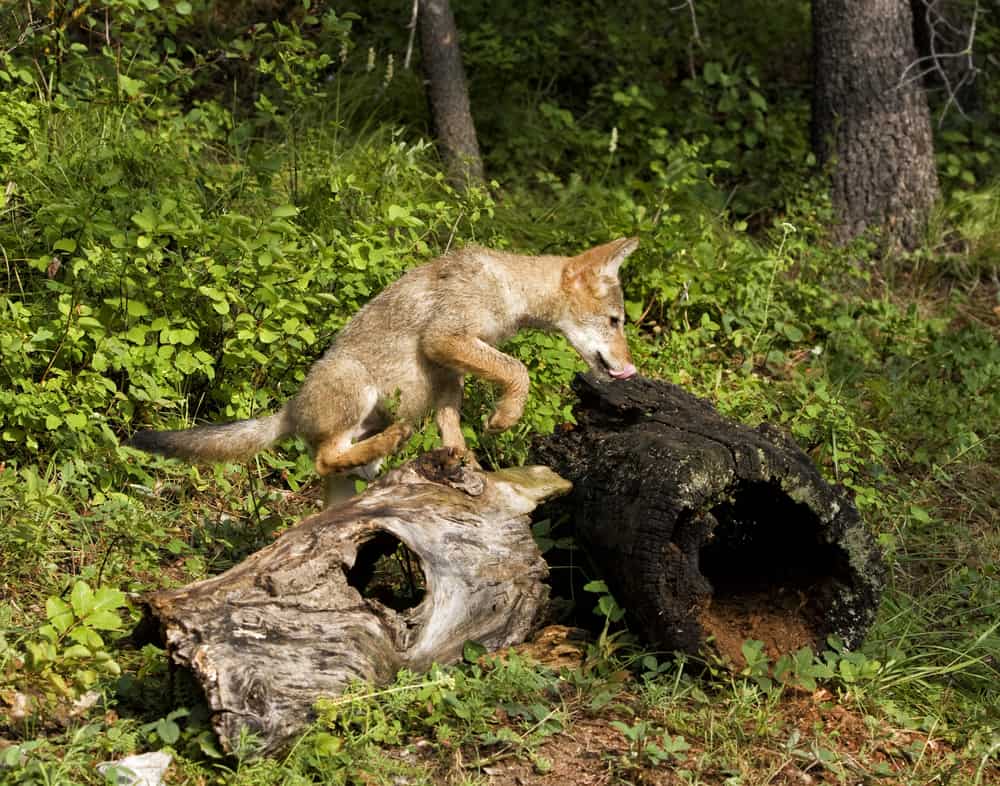 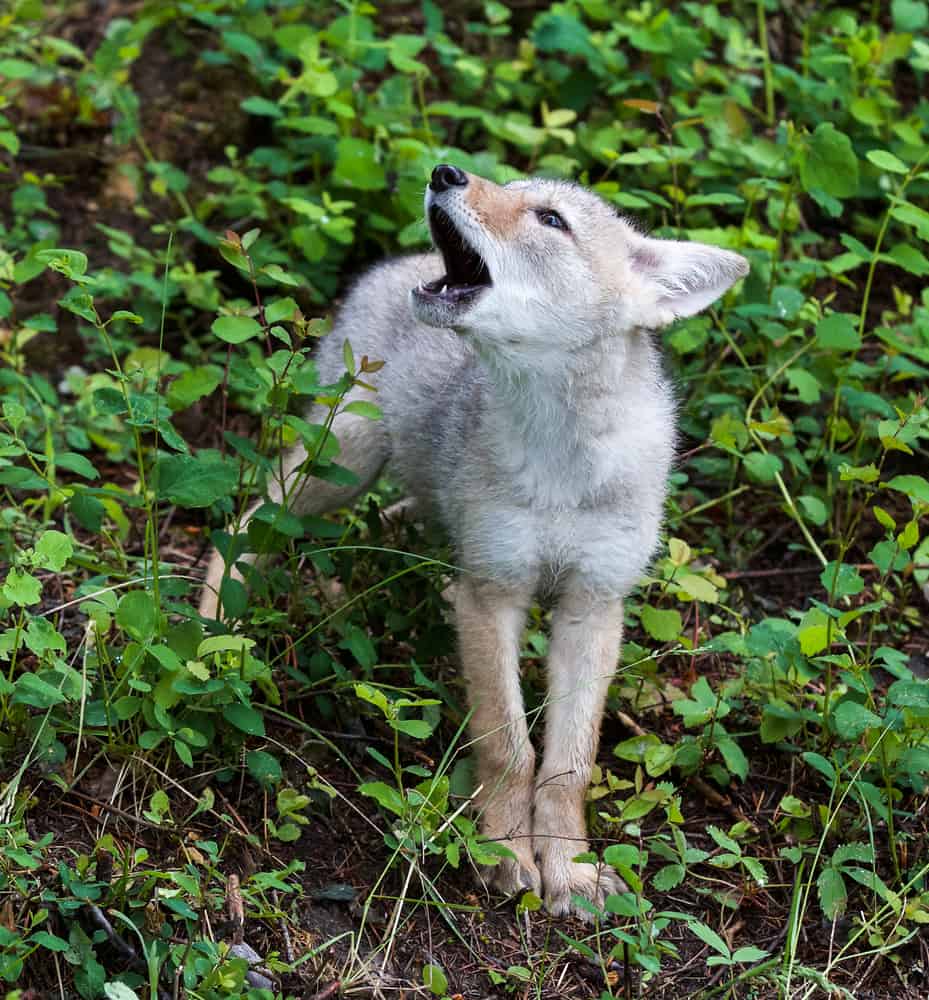 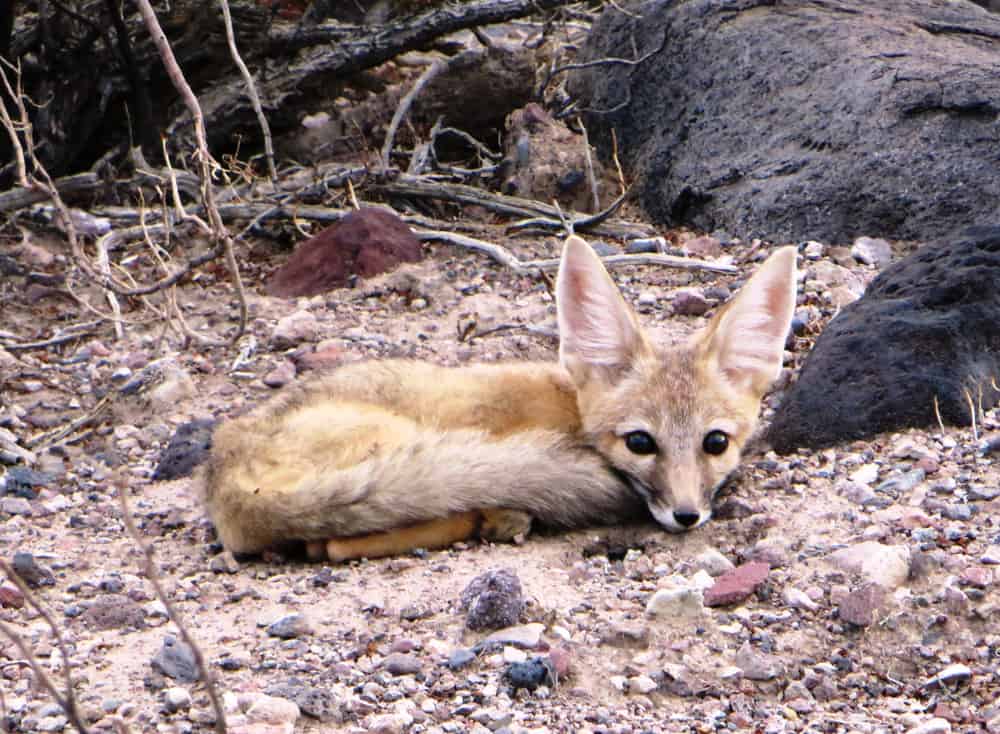 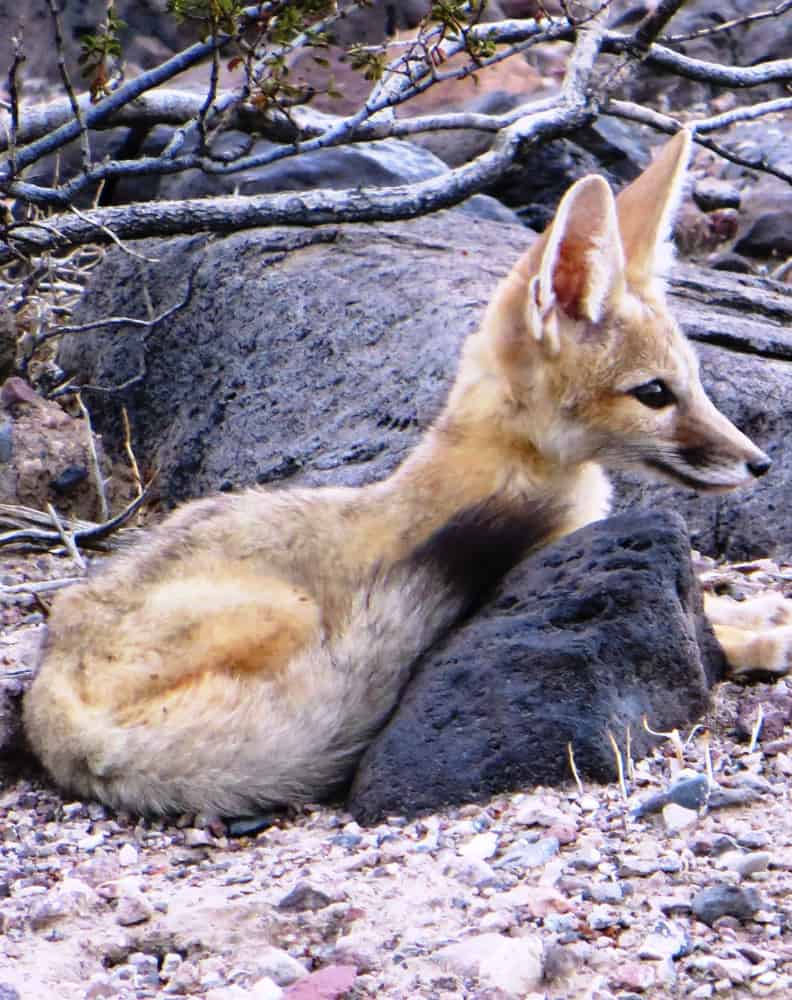 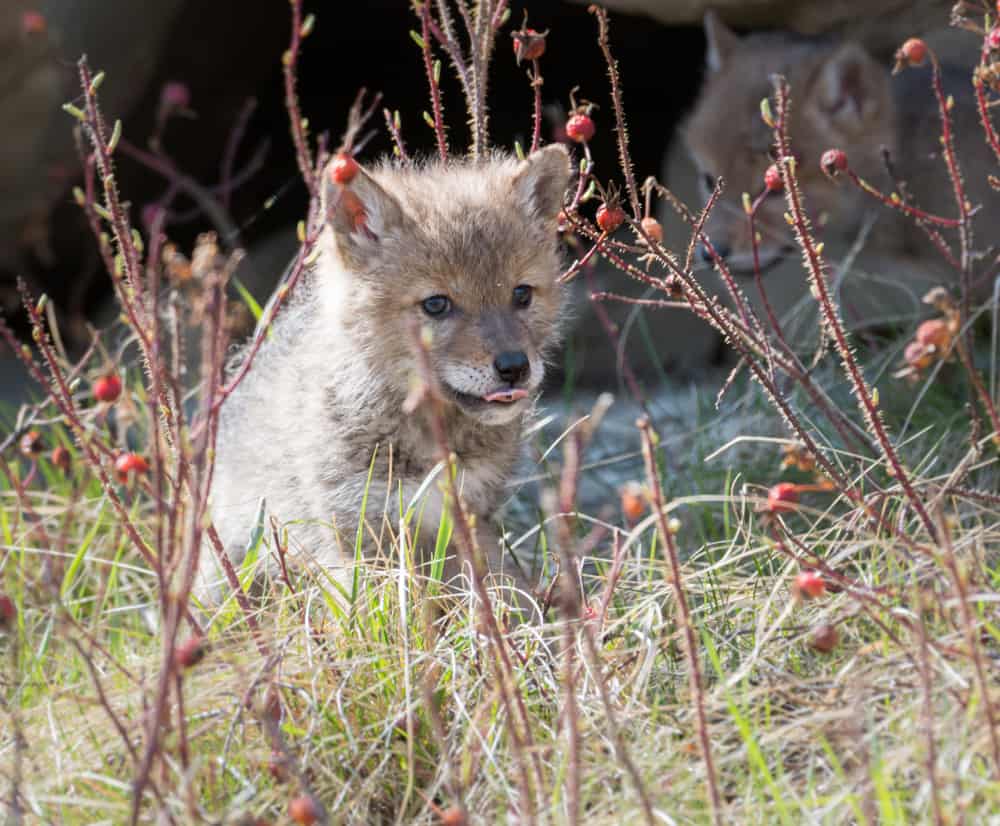 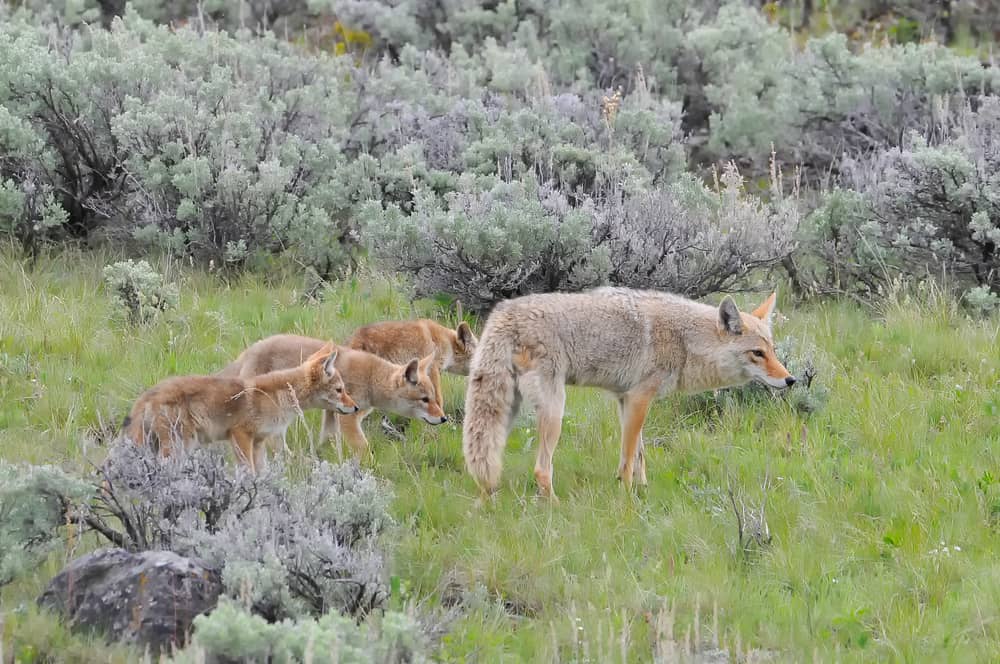 Can you keep a baby coyote as a pet or a baby fox?

In many states, the keeping of these animals is illegal. You can stay with them at home, but this will not be tolerated by the government because you’ll be denying these animals the privilege of being with their families. Additionally, if you let them go afterwards, they can’t be able to survive on their own. The more they spend time with human beings, the more they lose their ability to interact with other animals and depend on themselves.

Coyotes and foxes are clever animals that even the rehab centers are careful about. Rehab centers try as much as possible to ensure they are far from people and that they should fear humans. The fear is that these animals may adopt a behavior that is strange and end up killed by the law enforcement agency.

There are cases where coyotes coexist with human beings, but this doesn’t allow you to keep them. This happens because of a decrease in habitation. And we shouldn’t try to eliminate the animals because this will affect our ecosystem.

You shouldn’t even try to keep these animals illegally, you will be sued and fined, and you put the life of the animal at risk because it may be killed because of strange behaviors.

Coyotes are a species of canine mostly found in North America. They weigh about 7 to 20 kg (15 to 44 lb). Their length varies between 1 to 1.35 meters, and their tails are about 40 cm long. Although the weight between males and females varies, males are a bit heavy than their female counterparts and also long.

Furthermore, the size, color, and textures of coyotes vary geographically. The common colors of coyotes are gray, red, white, and black. For instance, coyotes in the highlands are mostly gray and black while those in deserts are a mixture of white and grey. The fur of coyotes can be long and short with some coarse and others soft based on their habitation.

The coyotes can be confused with others like wolves, foxes. They have some similarities in color; however, they are smaller in size compared to others. Coyotes’ ears are longer and they carry their tails downwards, not horizontal as the wolf does. 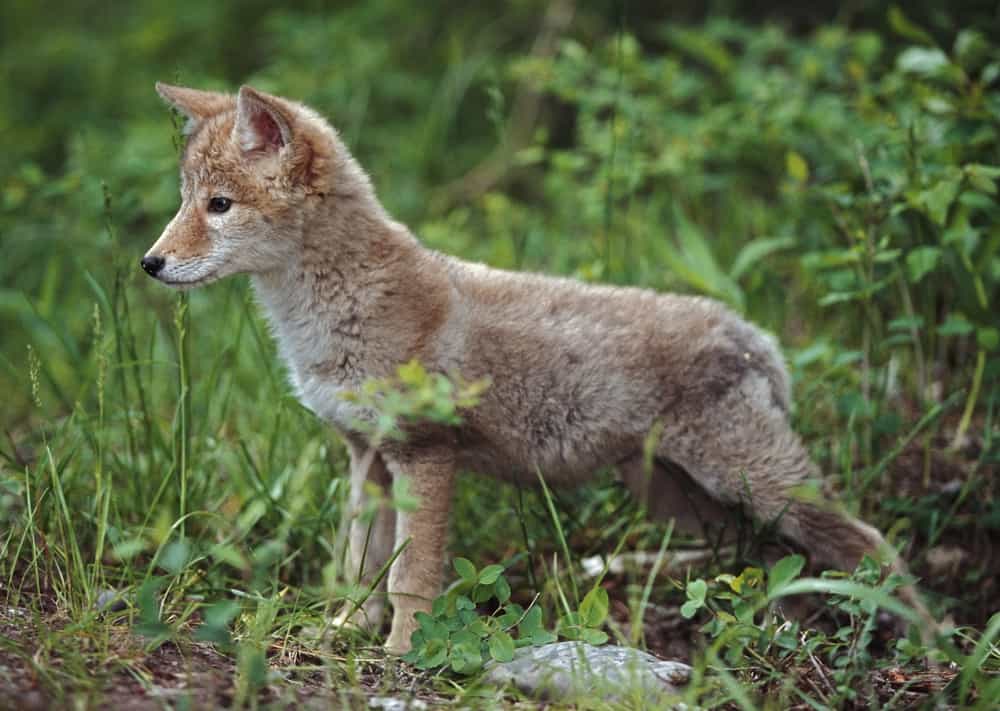 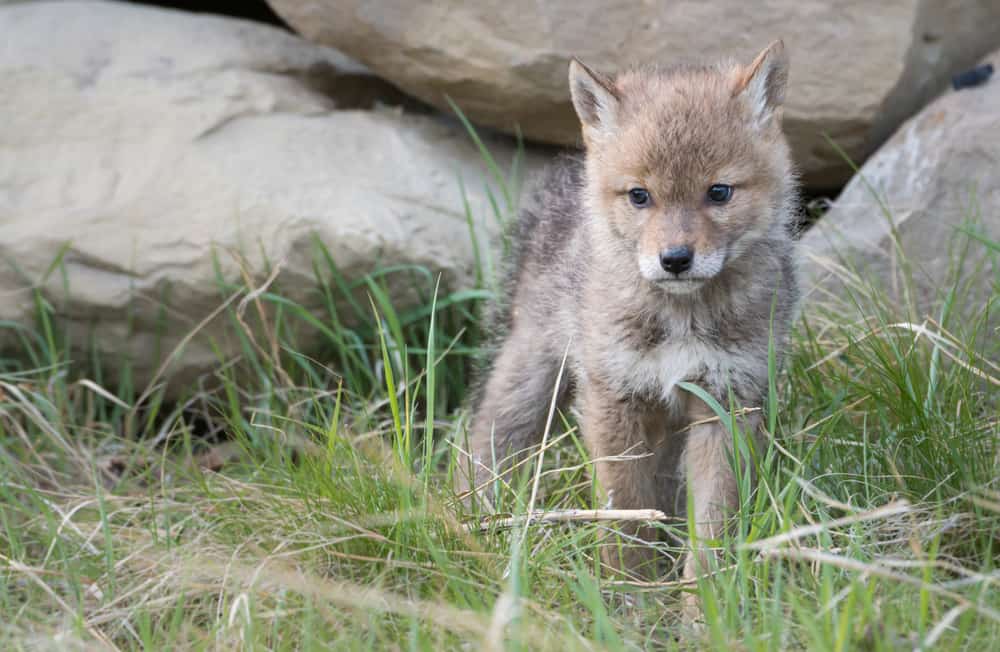 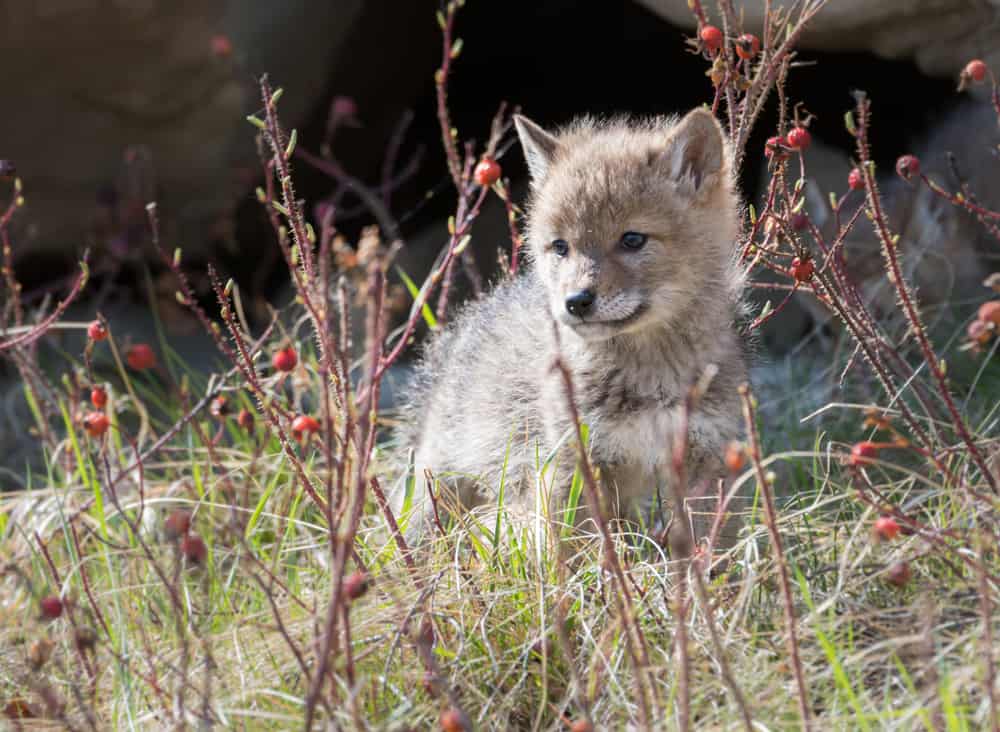 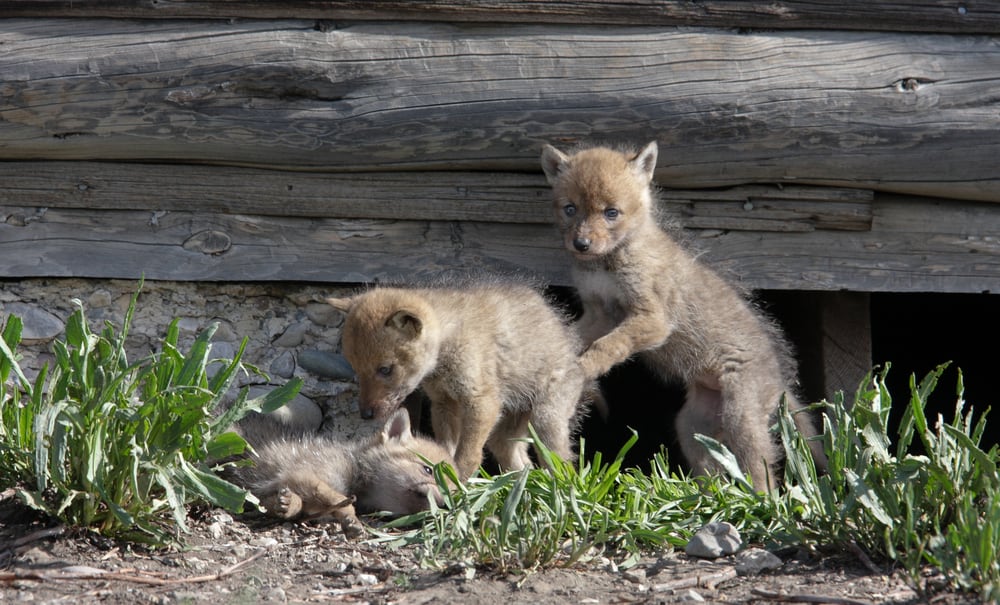 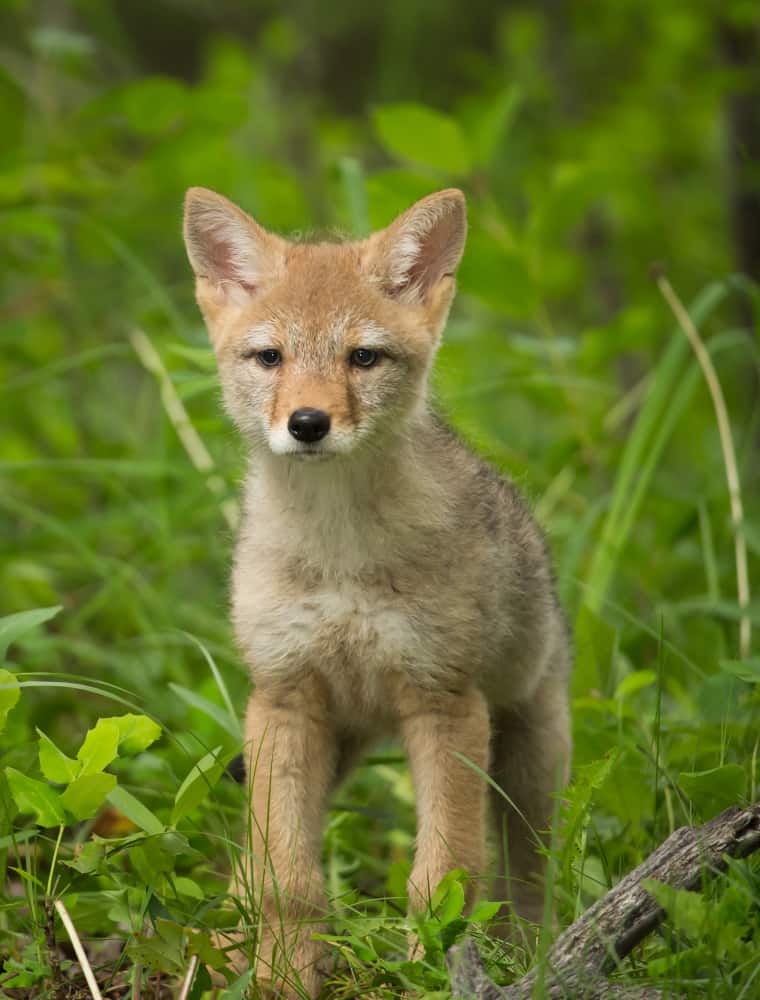 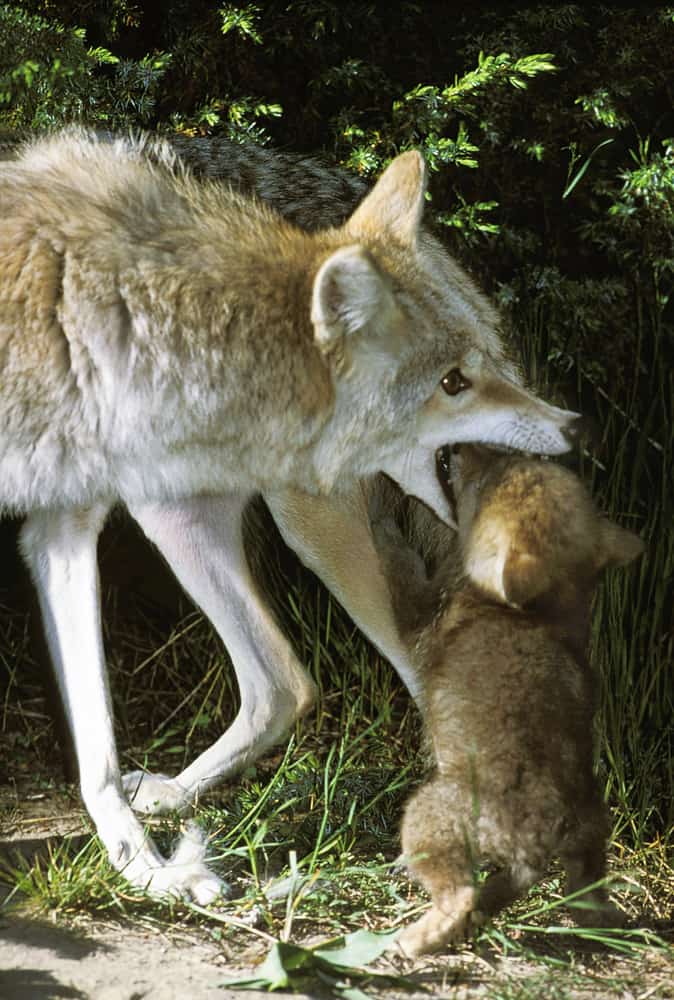 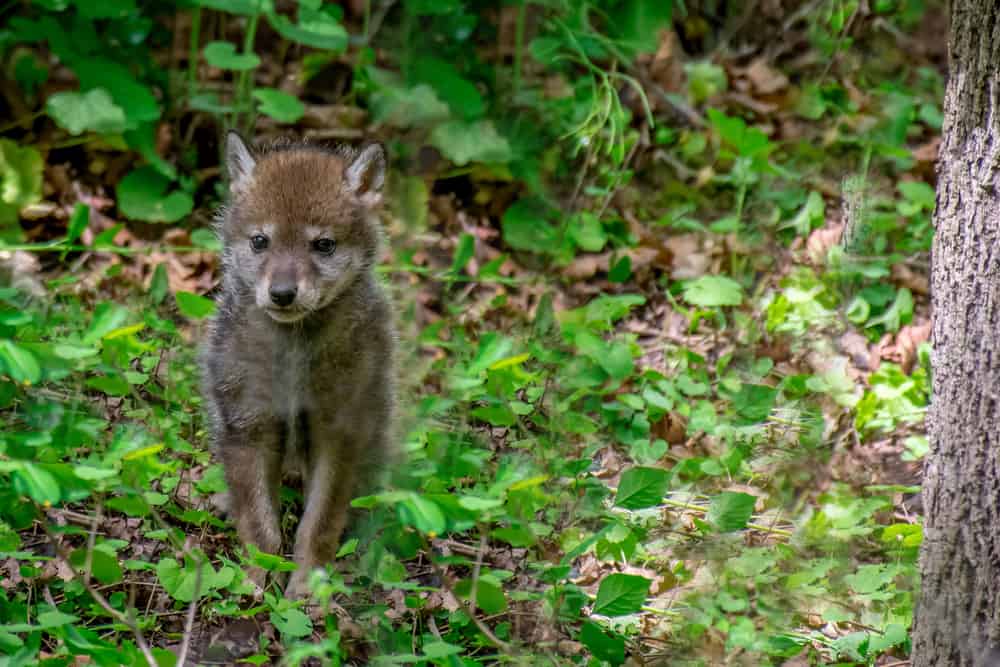 Habitation and behavior of coyotes

Coyotes inhabited the plains and regions of the western part of the American continent. Coyotes were identified by Thomas Say in September 1819. He differentiated coyotes from the wolf. The name coyote was first used by the historian Francisco Javier Clavijero.

Coyotes play with each other by head flexions, that is, side by side, dives, and spins.

They can bite each other playfully. The young play, but in most cases, they fight regardless of their gender. However, for adult coyotes, the fight is most for the same gender.

The fights between the female are more severe because they attack each other’s throat and shoulders. The males’ fights are not severe, and they fight silently in a vertical stance, not like females that fight in four paws.

Coyotes form a family of productive females. Non-members of the coyote families may join temporarily; in many cases these are young coyotes, unproductive females, and males that join for companionship.

The coyotes are monogamous whereby a female on heat attracts a number of males by producing a certain scent. The females choose one mate and they form a family mostly in the middle of the winter. The other males leave and try to get other females on heat. The family makes their den and aligns the den with dried fur plucked from their belly or grass.

The male does the hunting and brings food to the pregnant female.

Coyotes’ gestation period takes 63 days. Coyotes can be helped to take care of the young coyotes by other coyotes that are unproductive or didn’t mate.

At times coyotes can mate with dogs and have a breed called the coy dogs, but in rare cases, this happens. Furthermore, these offspring are not common because they die early because the male is not present to help in feeding the young. Again, because they are born in winter, they hardly survive.

The coyotes’ life span ranges from 10 to 18 years depending on the habitations. Wild coyotes are prone to more dangerous circumstances such as attacks from other predators. This cuts their life short compared to coyotes in a zoo or park that may be exposed to fewer dangers.

The availability of food also affects the life span of a coyote because if a coyote is in a habitat where food is available, they are likely to have a longer lifespan in comparison to those coyotes living in places where there is a scarcity of food.

Coyotes are more carnivorous feeding mostly on insects, mice, squirrels, rabbits, and carrion fruit. Coyotes mostly hunt in groups or as a family. Coyotes attack their prey from the front and lacerate the prey’s throat.

They don’t usually attack large prey, but when they do, young ones don’t participate. The mature coyote that are experienced can even hunt porcupines. They can urinate on their food to show ownership and deter other animals from eating it.

Coyotes can hunt together with American badgers, it has been witnessed these animals laying their heads on each other without protest. More so, they help each other to dig up rodents from their holes.

The coyotes’ threat and competitors

The other competitor of coyotes is cougars. However, cougars outdo coyotes and kill them. In any case, the cougars don’t eat coyotes although they may eat them, but generally, the rivalry is based on competition. Eagles are other enemies of the coyotes. Coyotes may try to fight small wolves, cougars, or share feeds, but coyote flees from large and strong cougars and wolves.

Coyotes can feed alongside fox but can kill the ones that are trapped. In some places like California where there are large densities of coyotes, they tend to kill foxes.

Additionally, coyotes can coexist with bobcats. The bobcats rarely attack coyotes, but there is evidence of coyotes attacking bobcats and even killing them. In cases where the two fought, coyotes dominated the bobcats. More so, it’s noted that in places where coyote coexists with bobcats, they reduce in number. Coyotes can even attack male bobcats.

Coyotes are also prone to diseases and parasites, due to their large number, diet and interactions. Coyotes are exposed to viral diseases like rabies and oral papillomatosis.

Parasites such as tick, fleas, and Pulex simulans are common. They may be the source of irritation although not as severe as diseases. Some diseases such as salmon poisoning cause the highest number of deaths in coyotes. Tapeworms invest coyotes too.

Coyotes are also at risk of being hunted by human beings for their fur which is used to make jackets, scarves, and muffs. Although it’s not durable, fur can also be used to make trimmings such as coat collars or dyed to make an imitation of the silver fox.

Coyotes can be controlled to make them coexist in the right manner with the human being; however, allowing them to wonder may be dangerous for both human beings and livestock.

Baby coyotes(pups) are adorable and should be left alone.