Not all snakes are fear-inducing and savage, some are gentle and have no venom. California kingsnakes fall under this category. Possessor of a shiny skin, this variety is one of the most profusely found varieties in the US.

They have a head that resembles a spoon. The average size of the California Kingsnake is between 0.6 to 1.8 meters and variations occur among the various sub-species. The commonest pattern is the one that is tightly packed and are usually light in color with a dark-colored background.   They are related to king snakes.

California kingsnakes are distributed in various parts of the US including Arizona, Nevada, California, Utah, Oregon. Apart from the US, they are also found in Northwestern Mexico and Canada.

Kingsnakes are terrestrial snakes. As compared to other variety of snakes, they are less observable, mostly because they have adapted to an environment of living undercover. They can be seen resting under logs, rocks, and burrows. These species inhabit rocky areas, deserts, hillside, marshes, woodlands, and suburbs. Swamps and river banks are favored by Kingsnakes if living near wetlands. However, the predominant habitat depends upon each sub- specie. 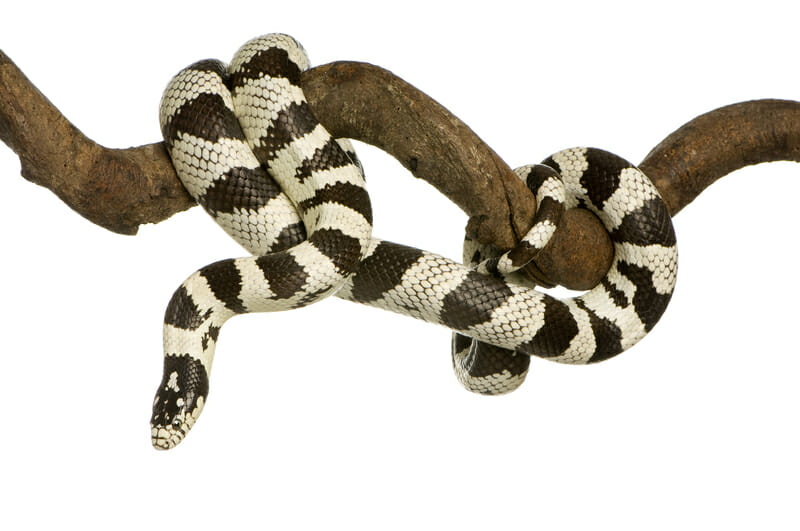 Kingsnakes do not ambush their prey but actively hunt them. The prey is hunted by following their scent. Since don’t produce venom, they constrict their prey. After the prey is located through its scent, it is suffocated by getting squeezed to death and then swallowed whole.

Diet-wise they cast their net far and wide but their primary food is contingent upon the sub- specie.  Bird and bird eggs, rodents, and lizards are part of their food. The ones that live near water bodies eat frogs, turtles, and turtle eggs. Kingsnakes are immune to the venom of other snakes hence their best meal for them is other snakes. They can consume the most venomous snakes including rattlesnakes, coral snakes, and cottonmouth. They even eat other non-venomous including other kingsnakes. 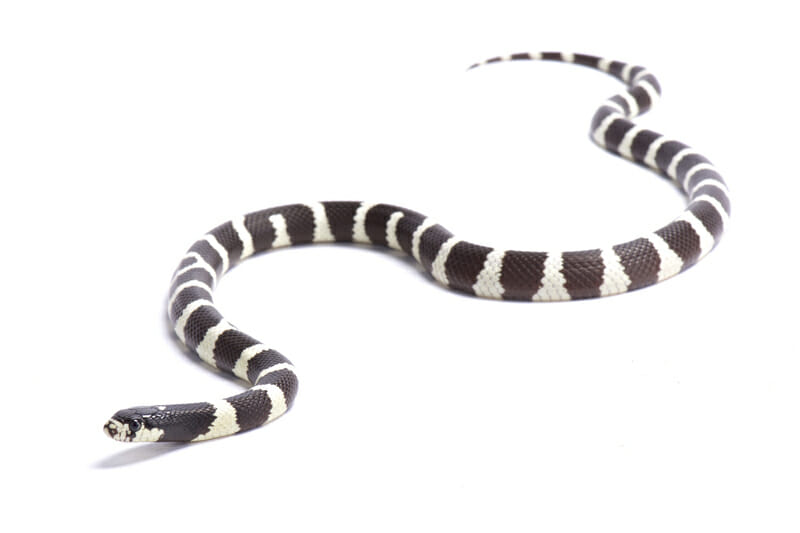 California kingsnakes, even though mainly diurnal in nature, become nocturnal during extremely hot weather. They are active between March/ April – October. Hibernation takes place in underground crevices once the winters approach. Spring and fall season witness them basking in the sunlight. A heap of leaves and other similar debris are favored by them as their resting place. Primarily terrestrial, they can also be found swimming and trees. Their temper depends from species to species but overall they are docile and passive.

The common predators of the California kingsnake include alligators, Virginia opossums, and striped skunks. They emanate fecal matter and a noxious smell to defend themselves from their predators. One of the most notable defense mechanismsis that they impersonate rattlesnakes by rattling their tails in a similar fashion.. Hiding their heads while coiling their bodies and hissing also accompany the rattling while confronting their predators. 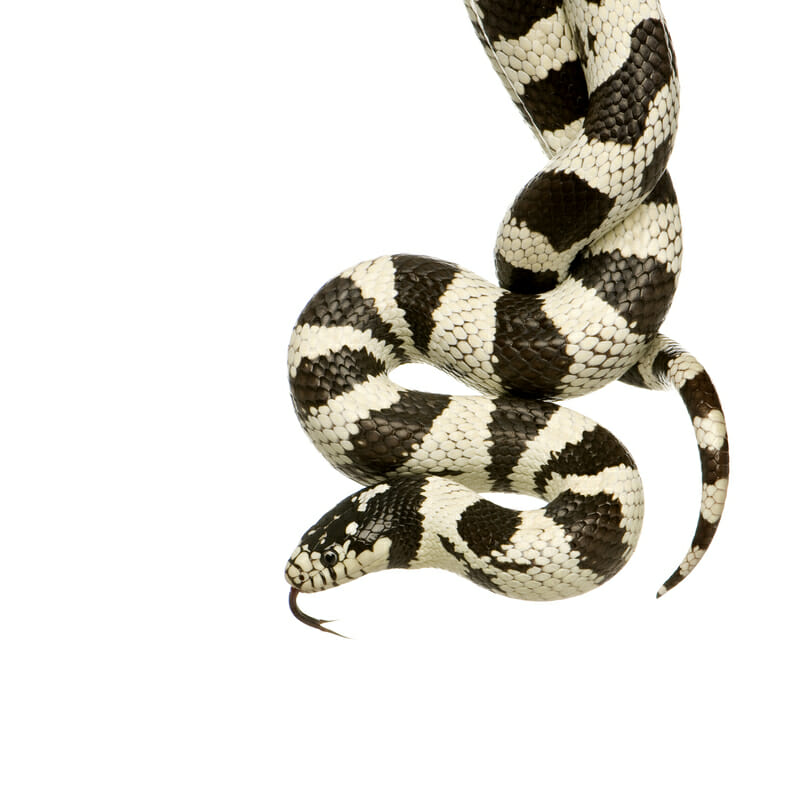 Male kingsnakes compete with each other for female Kingsnakes. Males find the females through their pheromone trail. The mating season begins in March and lasts until August. However, variations in mating can be seen depending upon the climatic conditions. The mating season depends upon the climatic conditions. The snakes in warmer climates mate in spring while the ones in colder climates mate in late spring or summer.

Kingsnakes are oviparous and polygynandrous. It means that that they lay eggs and mate with multiple mates. The interesting thing is that a female can produce a single clutch from multiple partners, More than one clutch may be produced if they mate with more than one partner. A female lays a clutch of 3-24 eggs in secluded places. Once laid, the females do not stay back to protect the eggs. The incubation period for the eggs is around 60 days. The hatchlings are independent from the moment they hatch from the eggs. The average weight of the newborns is around 8-13 inches in length. The funny thing is that the hatchlings may not resemble their parents either color or pattern. 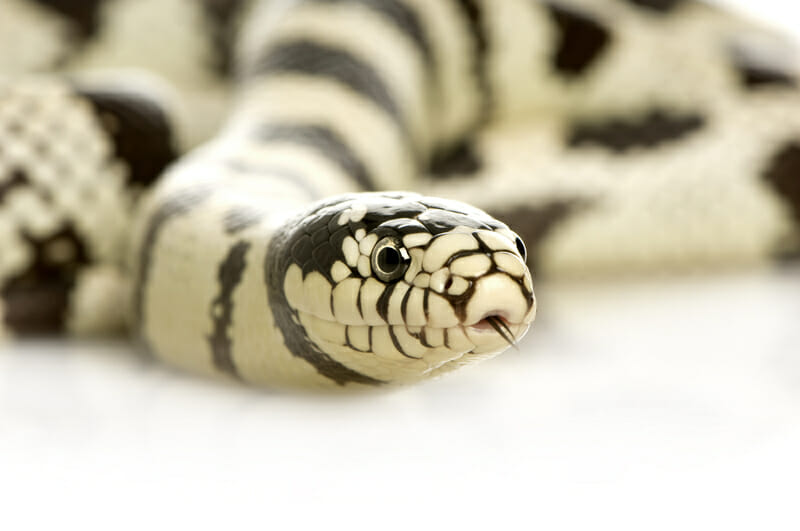 Kingsnakes do not produce any venom.

California kingsnake is categorized as a “species of concern” under the US Federal list. This particular species is under continuous threat from various sources. They are often kept in captivity as pets because of their docile nature. This has resulted in a massive pet trade endangering their lives. Road causalities and destruction of habitat also contribute towards their declining population. The North American kingsnakes are not considered endangered but the ones at The Todos Santos Island, Mexico are critically endangered. 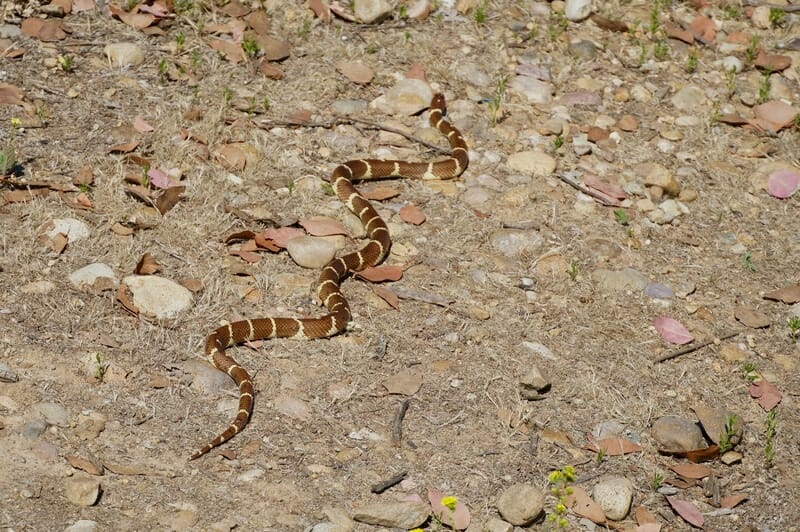 Found in the western USA, parts of Canada and Mexico, California kingsnakes are non-venomous species of this feared reptile. They are passive by nature and sender in their built with the colorful patterned body. These good looking snakes are non-venomous. They are oviparous and mate with multiple partners. Their conservation status ranges from not endangered to critically endangered depending on the geographic area.

California kingsnakes are not just pretty to look at, they are important for the ecology as well. They maintain the ecosystem by keeping the population of frogs, rodents, and other snakes including the rattlesnake.