All snakes are poisonous

Many people believe that all the snake that is found on this planet are poisonous, they can bite you and can cause instant death in the body, however, that’s not true. The scientist has revealed that there are 300 species of snake in the world and out of that only a small fraction of snakes is poisonous or venomous like rattlesnakes. The rest all are safe.

Once beheaded they will stay alive until dusk

This is not true, just a myth.

They always travel in pairs

They are rarely found together, unless is mating season.

Naagmani is another example of a mythological based story. It is a stone that has enormous power and It can grant the user several powers and wealth. People believe that snake guard the Naagmani, however, that’s not the case. This is a pure mythological story and these do not exist.

If you kill one its partner will be after you

This is only a myth.

The can sense sound with ground motion

The are not slimmy, skin is dry.

It is believed that snakes will avenge their partner’s death so it is better not to kill the snake. It is believed that a snake is a vengeful creature who will come to attack you if you hurt their near or dear ones. Many people believe this to be true, however, the truth Is that the brain of the snake isn’t capable of remembering something and the snakes can’t remember anything about who killed their partner and why.

It is believed in many parts of India that snakes will drink milk. It is said that the snake drink milk and so many people offer milk to the snake on various occasion. This is one of the biggest myths of India and this is completely false. Snakes do not drink milk. Snakes aren’t mammals, instead, they are reptiles. Snakes aren’t able to digest the milk and so they cannot drink it. Milk is like poison to the snake and it can cause their death. So, snakes do not drink milk on any occasion.

People believe that a flying snake can fly at piercing the head of the person and its eyes, and flying snake are very dangerous. They are compared to an arrow that flies towards the person and can hurt them pretty badly. However, in reality, this is a big myth. Understand that there is no way for the snake to achieve that speed at which it can break the head or pierce the eyes of the person.

Snakes can climb stairs or walls and just about anything if the surface is not too slippery. They climb to reach food and do so very slowly.

Many people are scared by the fact that snakes can climb stairs and walls of a house. People who don’t like snakes usually take up the upper part of the house or upper floor as they think that the snakes won’t be able to climb the stairs or walls to reach them.

Some snakes do not hunt at night, while other species hunt only at night. Depending upon the species of the snake it would be evident whether the snake will come out at night or not. Watch for these when the sun goes down: 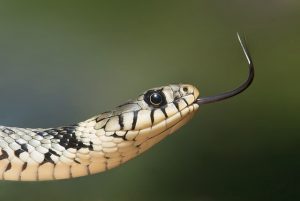 One of the main reasons why people are frightened of snake is because of their ability to see in the dark.

Snakes are one of the few animals that can see in the night. They have amazing organs that give them a full look at their prey and many snakes hunt for their prey at the night.

The snakes have a protein channel that helps them to see clearly in the dark. Moreover, the snake vision in dark is much similar to its camera that is capable of doing sense easily. A snake can sense any living creature in its vicinity and can find the best time to attack it. It’s all because of the pit gland of a snake. 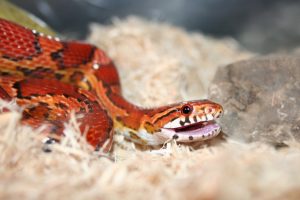 Another important fact is that the snake is a cold-blooded animal.

The snake will go out for hunting and be more active and agile due to its body function performing more actively. This will help the snake to catch its prey more easily. Also, many times, the weather of the place wild decides which will snake will come out during which part of the day.

Why are snakes most active at night?

The first reason why the snake is more active at night is because of better visibility. IN the dark, the pit gland of the snake is active and it gives them heat signatures like an infrared camera.

This helps the snake to see much better and it also helps it to find its prey more easily When compared to the night and day vision of a snake, a snake sees a detailed image at night than during the day. However, this all depends on species to species.

The next reason is because of the ease of finding their prey. Snakes eat rodents, rats, and other small animals. These animals are more active at day than at night. During the day snakes have difficulty finding and keep up with their prey in case they are running. Water snakes.

However, at night, all the animals are sleeping. Their body is defenseless and it is one of the best times for snakes to find to eat their prey. Moreover, the pit gland gives more information during the day rather than at night.

These myths are believed to be true by many people and they think that these are not myths. Well, scientists have provided most of these myths wrong over time.