Snakes bring out the deep-rooted dread in us that not many animals can match.

Checkered Garter snakes found primarily in the eastern side of the United States are stunning to look at and almost harmless. 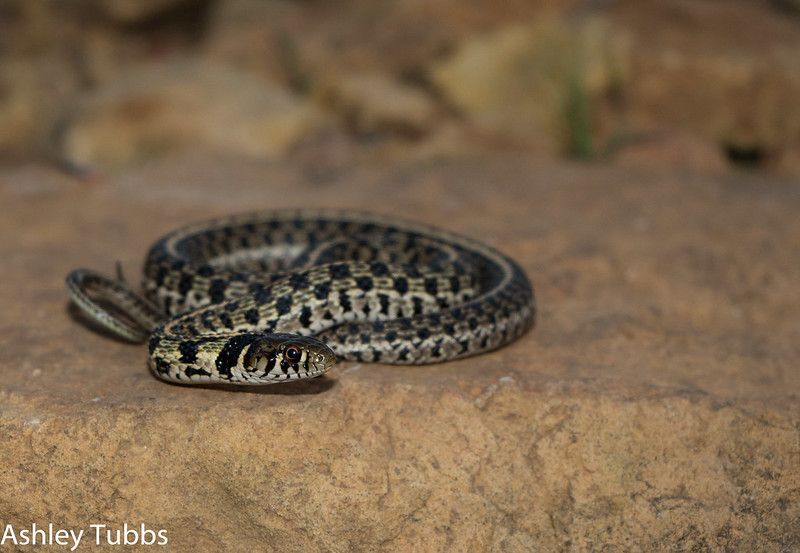 Their food is anything that is easily found in their habitat. They attract their mating partners by emitting pheromones as both male and female snakes give out two very distinguished smells. Except for a few sub-species, the Checkered Garter snakes are not considered as endangered.

Dive in to explore the absorbing world of one such gentle variety of snakes:

The Checkered Garter is one of those smaller varieties of the reptiles that measures anywhere between 23 and 30 inches. They grow up to 5 feet but rarely.

They are lean to look at and are chiefly green in color with black checkerboard pattern. Their color may vary across the species but most are catheterized by three elongated strips, one at the center of their back and the remaining two at the bottom of each side. They owe their name to the unique black Checkered pattern that runs down their backs. Another striking feature is the two-colored tongue that some of the Checkered Grater snakes possess.

They bear resemblance with others in the same species: Terrestrial, Mexican, and Black-necked Garter snakes. Pictures: 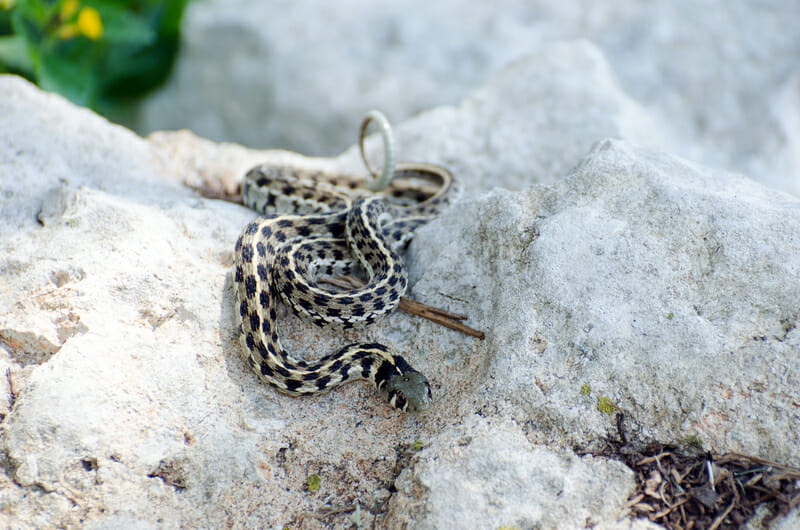 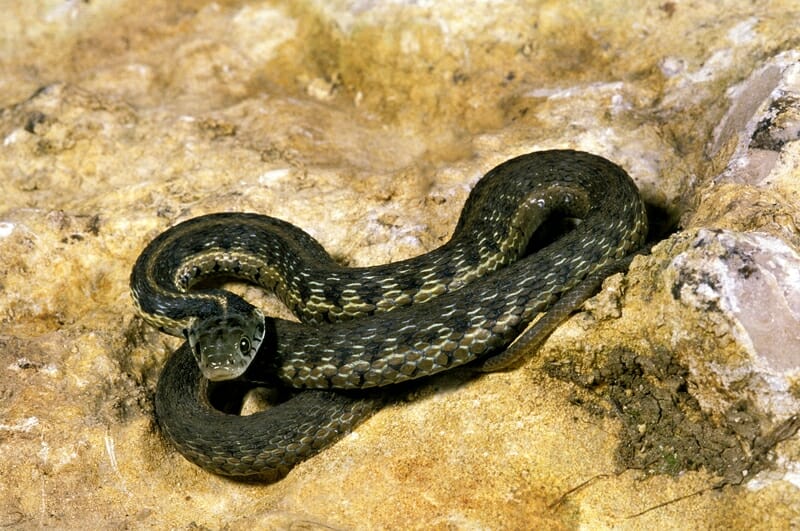 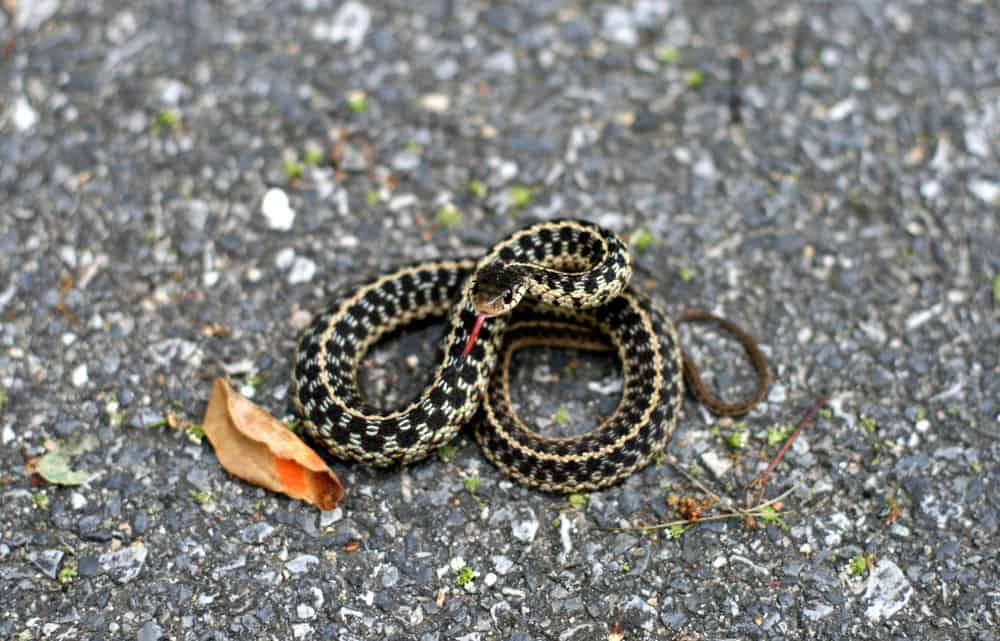 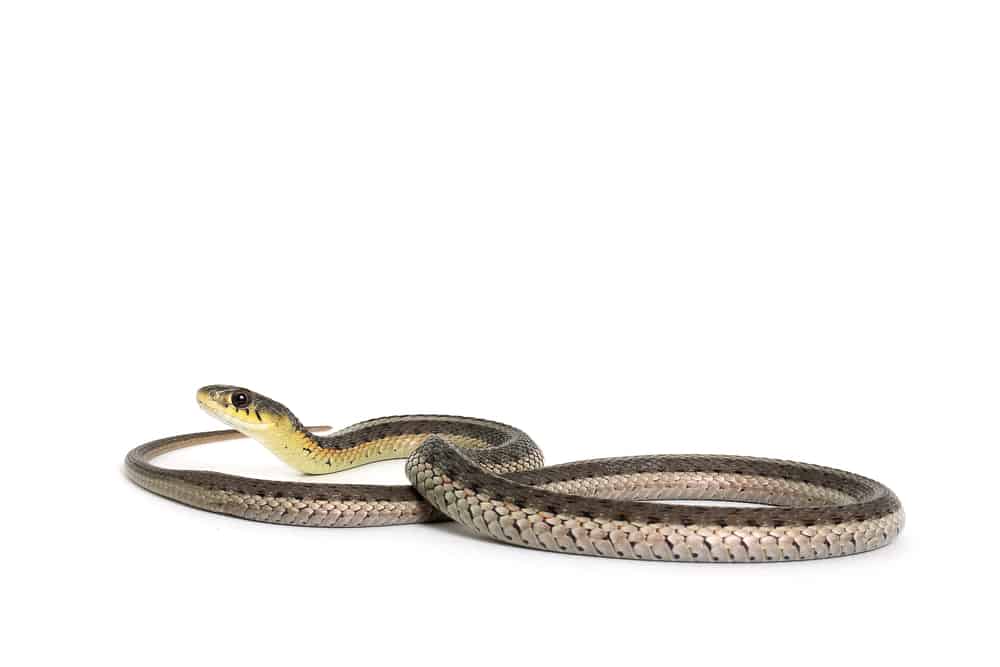 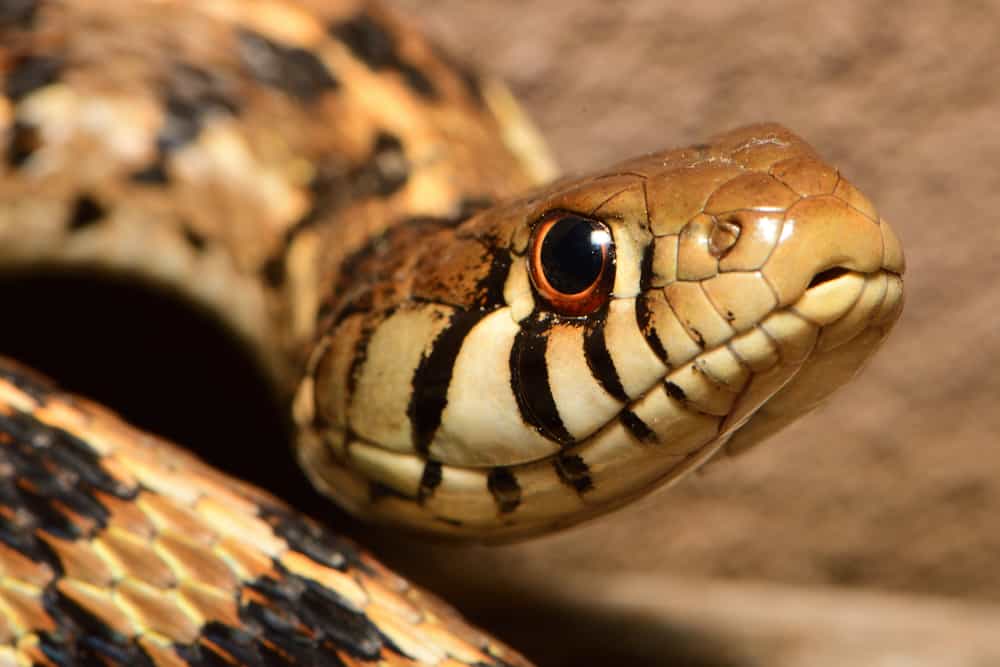 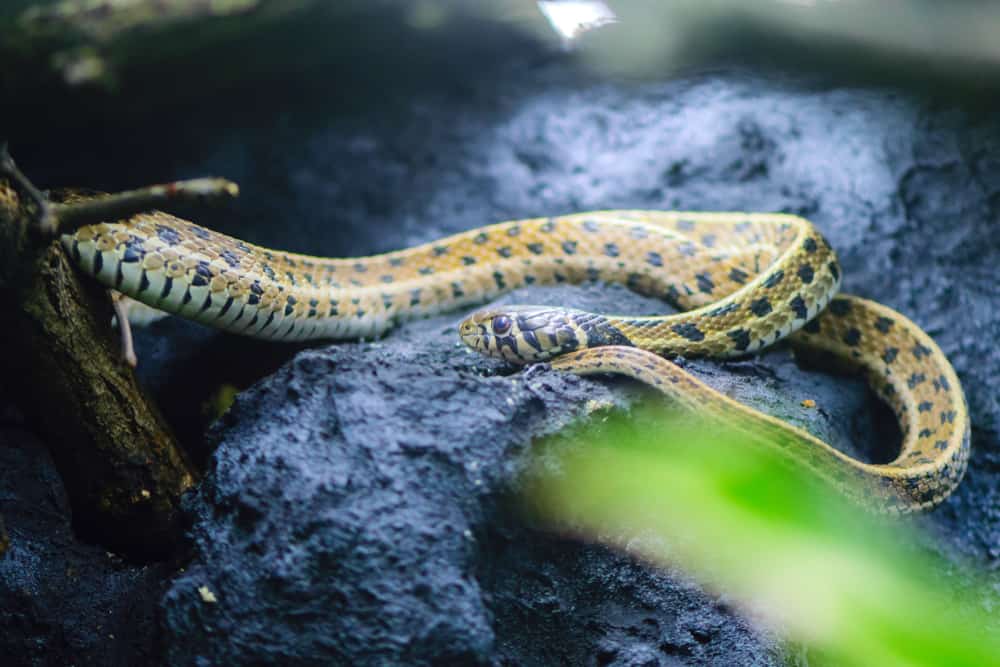 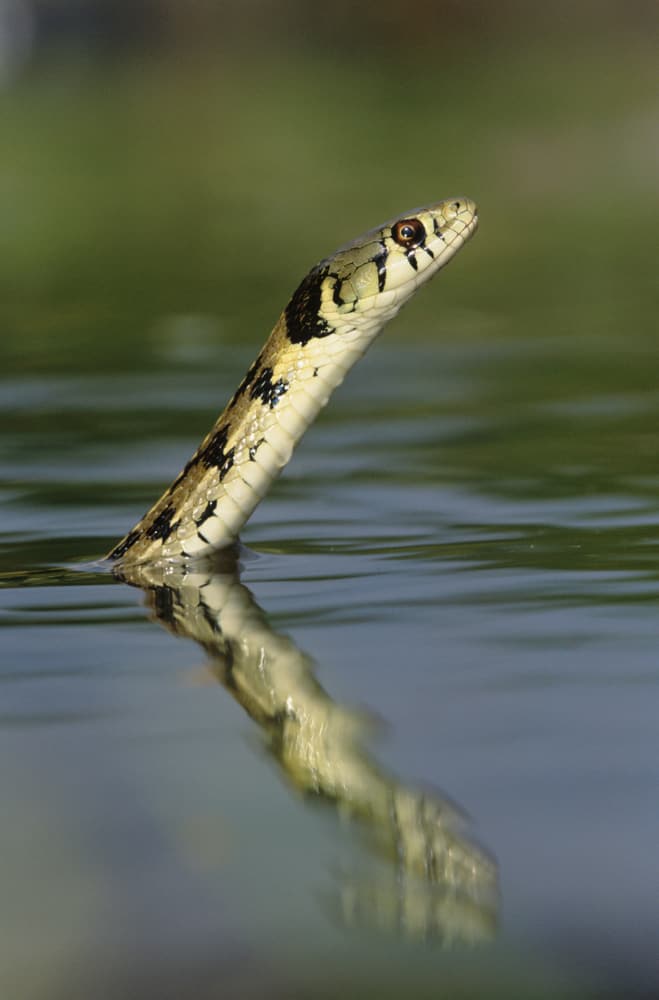 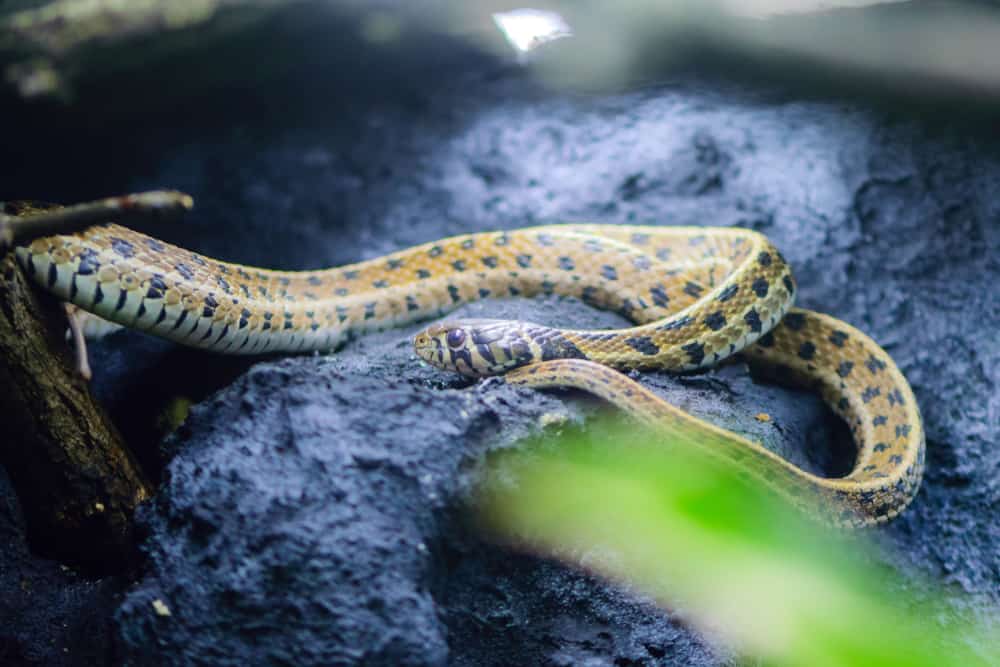 Bite is non venomous. Even though they produce neurotoxic venom, it produces mild reactions in humans. These are a gentle variety of snakes that are incapable of doing any serious harm to people.

They are found in plenty in North America, especially the Eastern side of the United States. States like Massachusetts, Rhode Island, Connecticut, New York, New Jersey, Delaware are known for having garter snakes. They have the distinction of being the state reptile of the states of Massachusetts. They easily adapt to the weather and vegetation of their habitat hence the variation in their adaptability as the geographies change. The more westward in the USA you go, the Checkered Garter snakes become more aquatic in nature vis- a vis their eastern counterparts.

Apart from the United States, they are found in Central Mexico, Guatemala, Honduras, Belize, and Costa Rica. 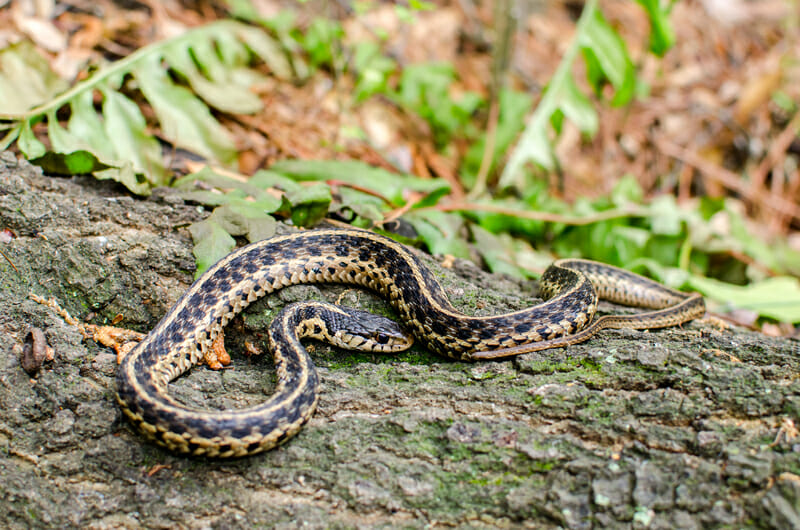 Checkered Garter snakes are carnivorous like all other snakes in the world. When it comes to their diet, they eat anything and everything that they find in their habitat. Rodents, lizards, crickets, earthworms, frogs, toads, if it’s a creature they can overpower, it’s fit to be consumed.

They are fast to adapt according to their surroundings. If living near a water body, other aquatic animals become their prey like crayfish, fish, frog eggs. Frogs and tadpoles are a favorite of the Checkered Garter snake if their habitat is aquatic. There is a variation in the diet when it comes to adults versus young ones. They consume more earthworms as opposed to adults. They don’t chew their food rather sallow their prey in entirety.

Like all reptiles, Checkered Garter snakes are heterothermic. It means that they regulate their body temperature according to the external environment. Because they are heterothermic, they can be seen soaking up in the sun to maintain the same. They are mainly earthbound but can be found on vines and shrubs as well. They are good with speed, whether on land or water. During the winters, they hibernate in large spaces with other Garter snakes. They travel long distances to hibernate with others of their type.

Since they are relatively small in size, have many predators including squirrels, bullfrogs, crows, hawks, etc. These snakes emit a foul odor whenever they feel threatened. When interrupted, Checkered Garter snakes will either swing its tail and hide their head or they’ll coil up and attack. Between these two, the former is more typical and common behavior.

They find other of the same species by following the pheromone-scented trails. This pheromone based communication becomes very important during the mating season. The scent emitted by males and females can be differentiated very clearly. However, male snakes give out both male and female smells leading to confusion among other males.

The Checkered Garter snakes are viviparous and the birthing season for them is between May to October. A female produces 6 young ones at a time but can go as high as 35. The length of a newborn is 8 inches at birth. 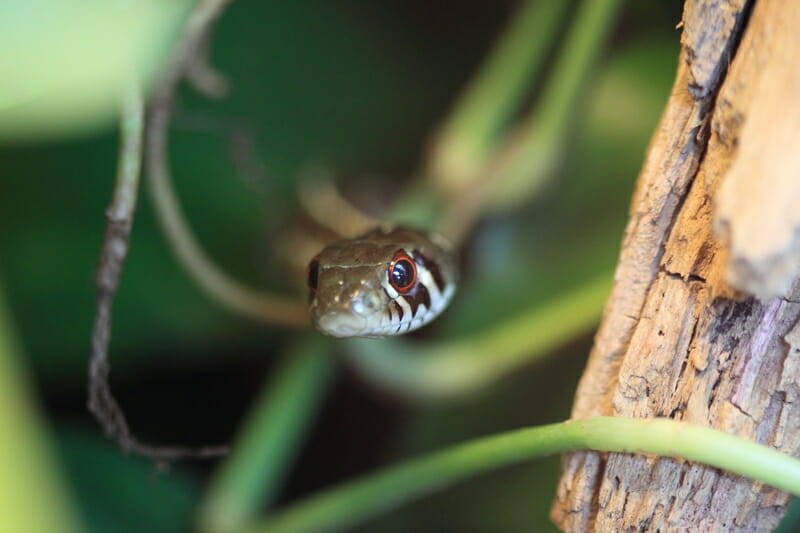 Despite the rapid decline in the population due to the hunting activities process of urbanization and destruction of wetlands, Checkered Garter snakes are stil found in plenty. They are regarded as the least concern on the 2013 IUCN Red List. However, efforts are being made to conserve the species by constructing cattle tanks and agricultural development. The San Francisco garter snake is a sub- specie that is regarded as endangered since 1969. Preying of crayfish has also resulted in the diminishing population of a narrow-headed garter snake.

Beyond the fear, there is a fascinating world of snakes to explore. There are approximately 3,000 species of snakes around the world. Not every snake is black nor poisonous. Some are quite arresting to look at and harmless to humans.

Garter snakes are possibly the anti-thesis of the fearsome image of snakes that people have in their minds- small, beautiful, and harmless. An integral part of the environment , they help maintain the biodiversity and the fragile balance of the ecosystem.