With their elongated, legless bodies and flickering of their split tongue, snakes have enchanted civilization since time immemorial. Both feared and revered for the danger they symbolize, snakes are much more that than their venom.

Eastern Hognose snakes also called “puff adders” are typified by a stocky built and have an upturned snout that sets them apart from other snakes. These snakes can be found in yellow, light brown, orange or black. The color variation is contingent upon the locality they are found in. They have quadrangular spots all across their back. The tail most often ends up in a tight curl. The average adult male Eastern Hognose measures up to 71cms, including the tail. The length can go as high as 116 cms. The females are comparatively larger than males among this variety. Pictures: 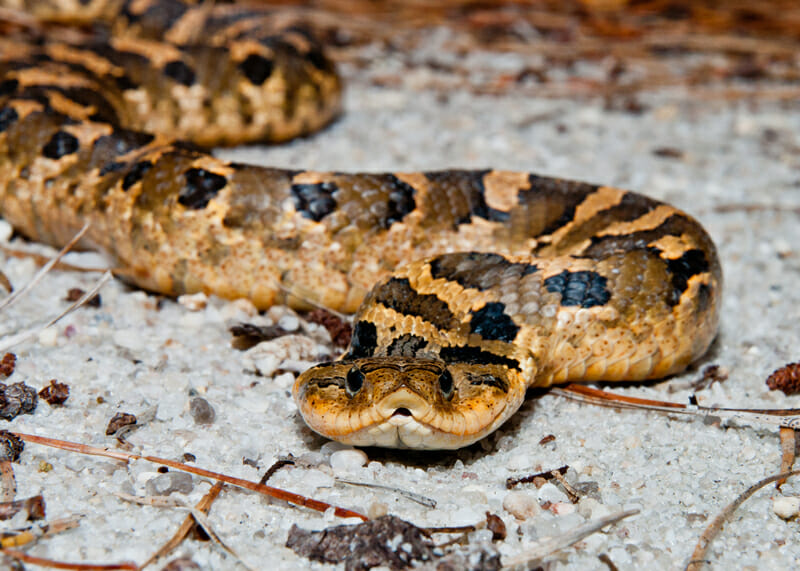 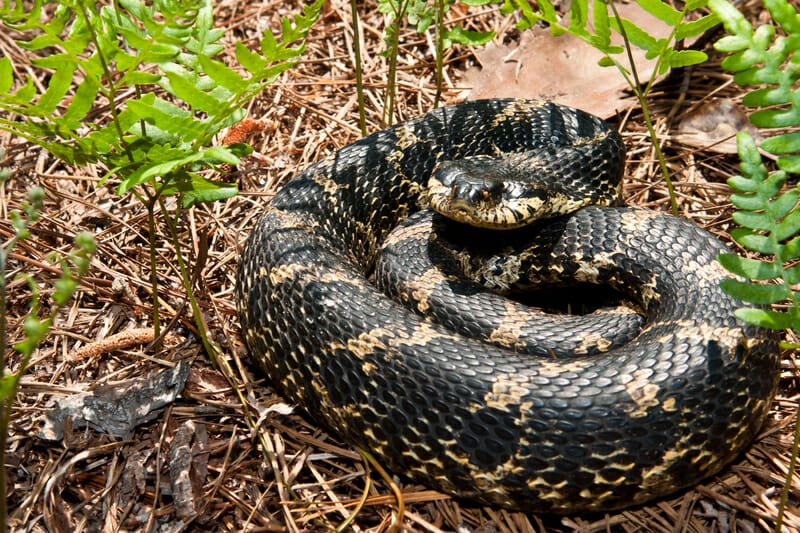 The enlarged teeth located at the back of the upper jaw have mild venom. This venom is amphibian-specific and harmless to humans. People who are allergic to saliva may experience localized when bitten however there is no documentation of any human death.

Geographically speaking , they are found from Wisconsin to southern Ontario, Canada and southwards of New Hampshire and south to southern Florida and west to eastern Texas and western Kansas.

Eastern Hognose snakes can be seen inhabiting dry, sandy, and arid areas. They are also found in coastal areas, farmlands, forest edges and fields that contain crops or grass. When it comes to preference of water bodies, their preference lies towards well-drained areas. Greenhouses and barns are some of the atypical places that the they are found in. 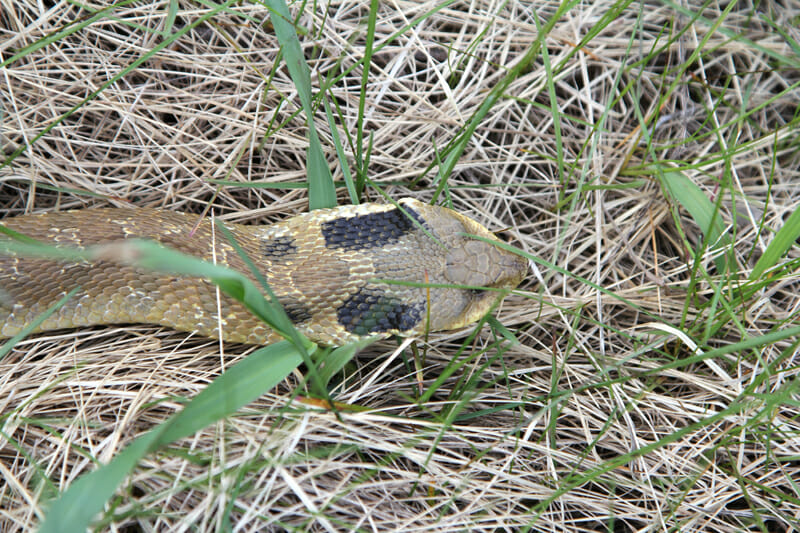 Like other snakes, Eastern Hognose snakes are carnivorous and consume a wide array of animals. They subsist on amphibians, small birds and mammals, reptiles, salamanders, and fish. Among amphibians, they have a particular fondness for toads. Worms and insects also form part of their diet . Preys like frogs and toads are eaten alive whereas other prey animals are swallowed whole. 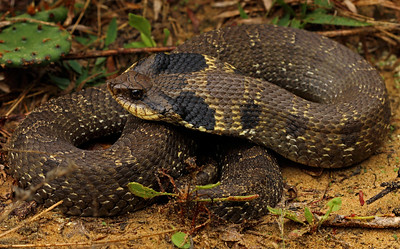 Hognose snakes are strictly diurnal creatures. They like to be on their own but limit their activity to early or late in the day. At nighttime, they rest by burrowing themselves in loose soil. Their period of activity is limited to summer months from early April until October / November. Hibernation begins as the temperature drops below 20 degrees Celsius ( September- November). Unlike other species that prefer to hibernate in groups, Hognose snakes hibernate solo in self-made or abandoned burrows.

The Hognose snakes have one of the most dramatic defense behavior when threatened by their predators. Puffed up body, head that’s flattened and expelling air by hissing, they are a sight to behold! They open their mouth wide to deter their predators. This is exactly why they are given the moniker of “puff adders”. They often pretend to be dead and give out noxious fumes to discourage their predators. 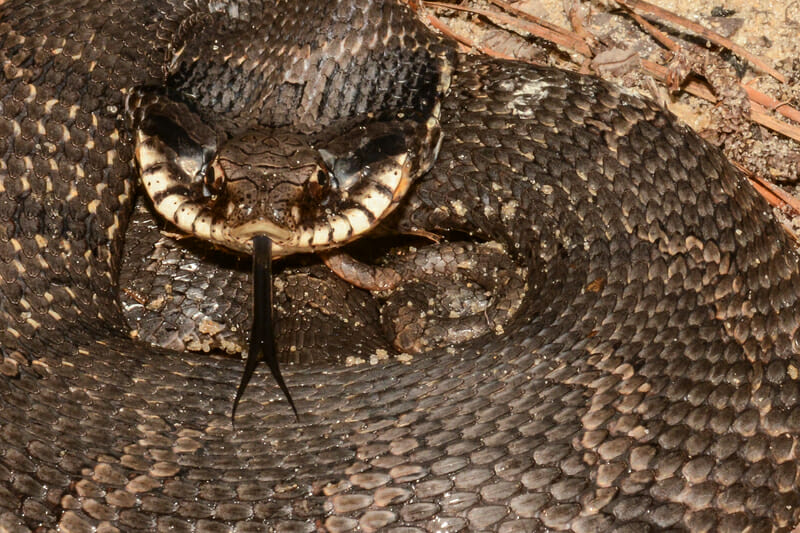 Eastern Hognose snakes are oviparous and polygynandrous. It means that that they lay eggs and mate with multiple mates in a given mating period. Mating takes place annually mainly at the beginning of summer and spring. In case of a second breeding season, the females store the sperms until the next spring. The male travels long distances to search for their mates as opposed to the females who prefer to station themselves in areas that are best suited for laying and nurturing eggs. Scent trails of the females is followed by males in order to find them for mating.

On an average, Eastern Hognose’s clutch contains 10-30 eggs. The incubation period is around 40-50 days and the eggs during August and September. The newborns are anywhere between 10-20 centimeters long. Females of the species mature at 21 months vis- a vis the males who mature between 18-24 months.

Eastern Hognose snakes are classified as “Least Concern” by IUCN. The population is more or less stable and sees variations depending upon the availability of toads on which they feed. However, in a few states of the US, they have a “listed” conservation status. Concerns have been raised in a few places about their declining population. 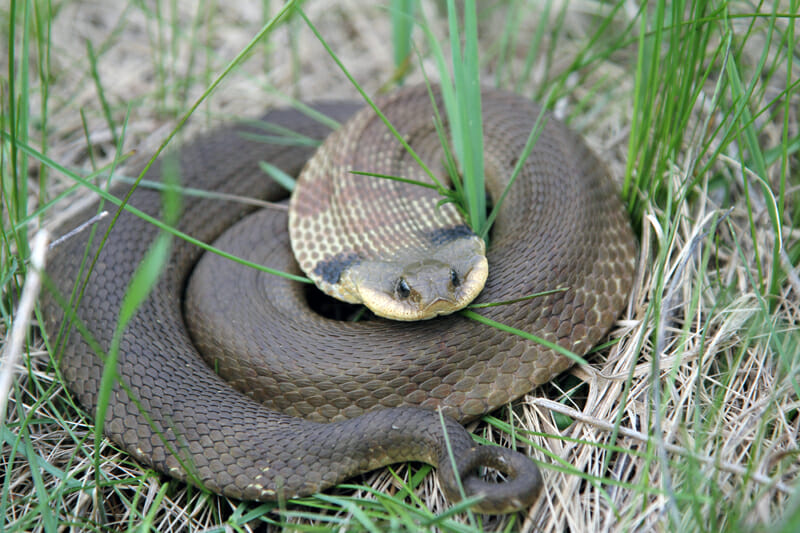 Stout and stocky, the Eastern Hognose snakes are found in various parts of Canada and the US. They prefer to inhabit dry and arid spaces and can be seen occasionally near water bodies. Also called “puff adders”, this species is known for its theatrical defense mechanism. They have multiple mating partners and mate once a year. Toads are their favorite thing to eat. Apart from toads, they eat a variety of other reptiles and small mammals for their sustenance. Lastly, Their venom isn’t toxic for human beings.