The image of snakes in our minds is one that is synonymous with fear. However, not all snakes are venomous or harmful to humans.

The queen snake, Regina septemvittata, is one of the species of snakes that is quite harmless, meek, and elegant. It is a relatively small, slender, non-venomous species of semi–aquatic snake that is endemic to North America.

Read on to find more interesting information regarding this royal looking species of snakes.

The Queen snake is a slender, small-headed snake whose size ranges from 40 to 90 cm. The snake is usually olive, brown, or grey in color, with a light yellowish stripe on each side. The scales on queen snakes are keeled. Three dark-colored dorsal stripes may also be visible in the young ones and in some adults, but they usually tend to fade away as the snake matures.

The belly of the queen snake is typically yellow or cream in color, and the same color extends to the throat and chin. There are also four brownish stripes along the length of the belly which merge towards the tail.

The head of the queen snake is narrow. The pupils are round, a feature shared with most other snakes belonging to the family of colubrids. 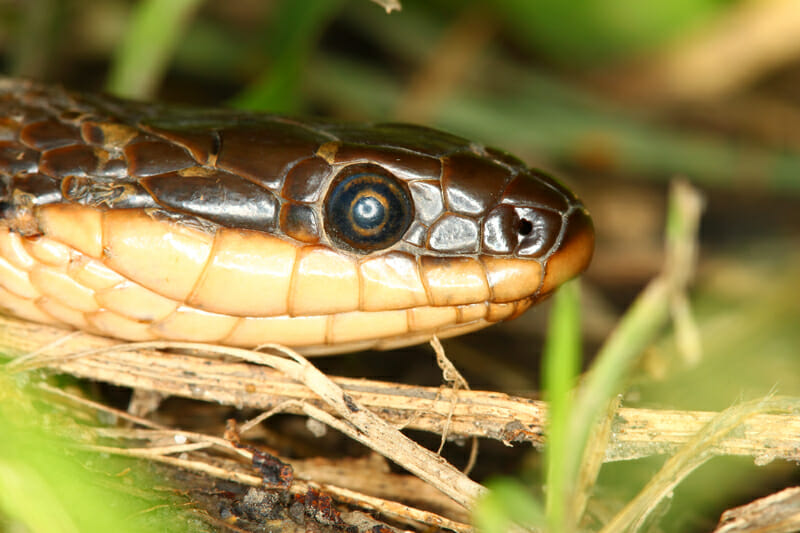 Queen snakes are non-venomous snakes and are unlikely to bite.

Queen snakes are semi-aquatic species and prefer shallow streams and rivers with shrubs and trees nearby. They are also found to inhabit near other water bodies, such as ponds, lakes, marshes, and canals. Crayfish are their preferred prey, and they are found in areas where crayfish are in abundance.

The temperature of the water is also an important factor in their habitation, and queen snakes require a minimum temperature of 10° C when they are active. 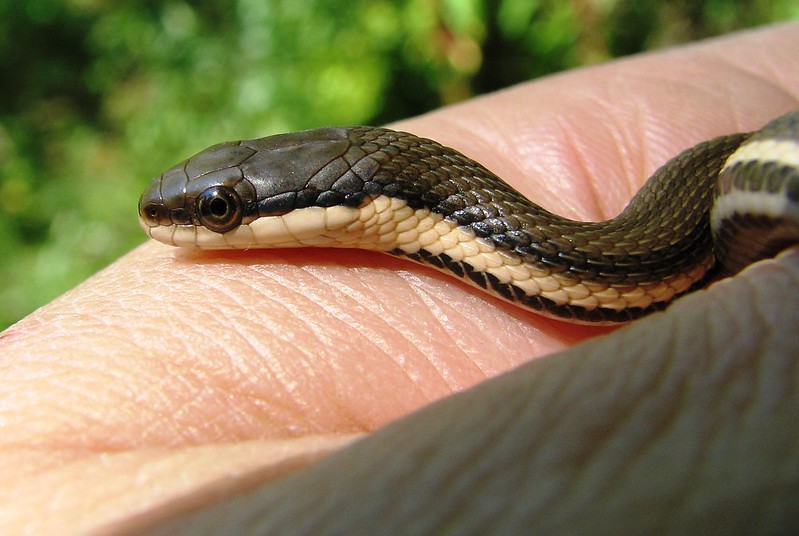 CC Image courtesy of Pete and Noe Woods on Flickr

Queen snakes survive almost entirely on freshwater crayfish. Other sources of food include frogs, tadpoles, newts, snails, etc., but these other sources only account for approximately 10% of the snake’s diet according to some studies.

For finding its food, the queen snake does not utilize sight, sound, or heat. Instead, it uses its tongue to catch the smell of its prey and transfer the scent to receptors located within its mouth. In this way, it is able to find and hunt its prey adeptly even underwater. Unlike other crayfish snakes, queen snakes tend to avoid crayfish with hard shells, and instead prefer to feed upon newly molted crayfish which are soft. 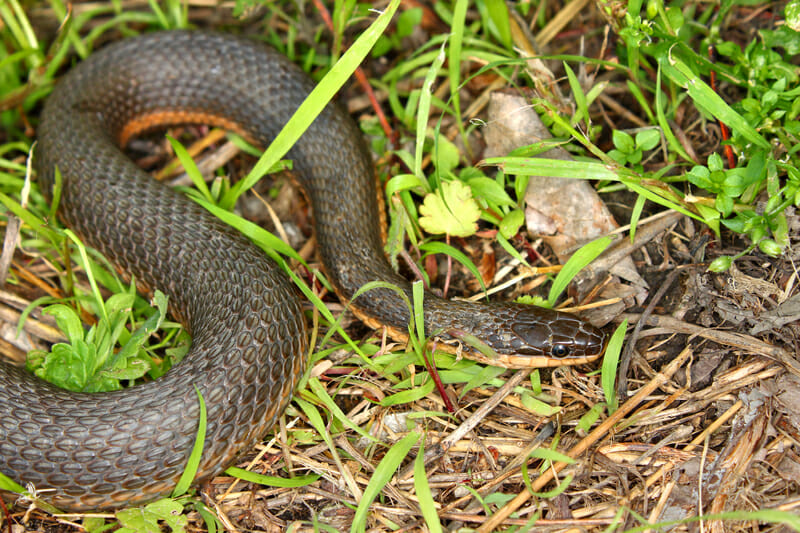 Queen snakes are diurnal. They usually spend the day concealed below a rock or some vegetation on the shoreline of a water body or hanging in a tree or shrub above the water. If disturbed, the queen snake will swiftly drop into the water, and either stay hidden at the bottom or swim along the shore to emerge elsewhere.

Queen snakes spend the winter months in a state of ‘brumation’, wherein they spend the cold in a state of dormancy. They often brumate in groups, sometimes even along with other snakes and amphibians. 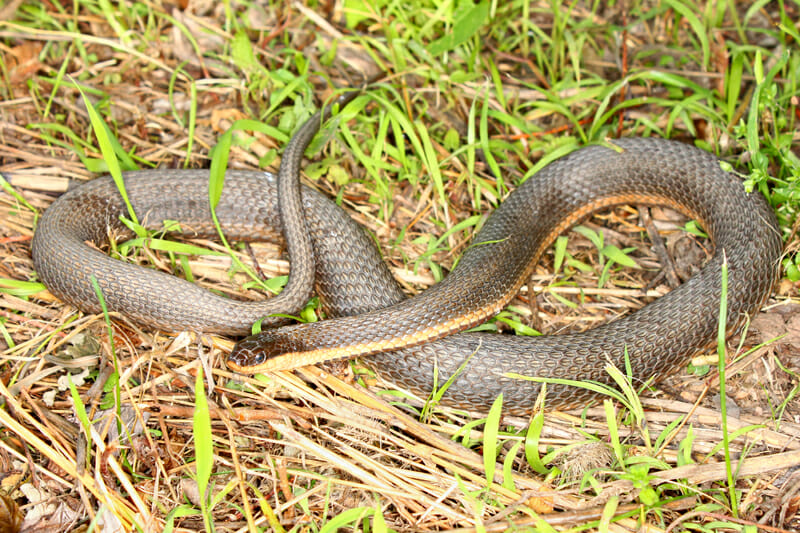 Mating occurs in spring, and female queen snakes give birth in late summer. Breeding may also occur in autumn, in which case the female usually prolongs its pregnancy to give birth in spring. This is so that the female can conserve its energy during the period of brumation.

The queen snake is ovoviviparous – that is the female gives birth to young ones after carrying the eggs in her body. Usually, 5-20 young ones are born in a single litter. Once the young ones are born, they are able to move around and swim, and are capable of fending for themselves quite independently. 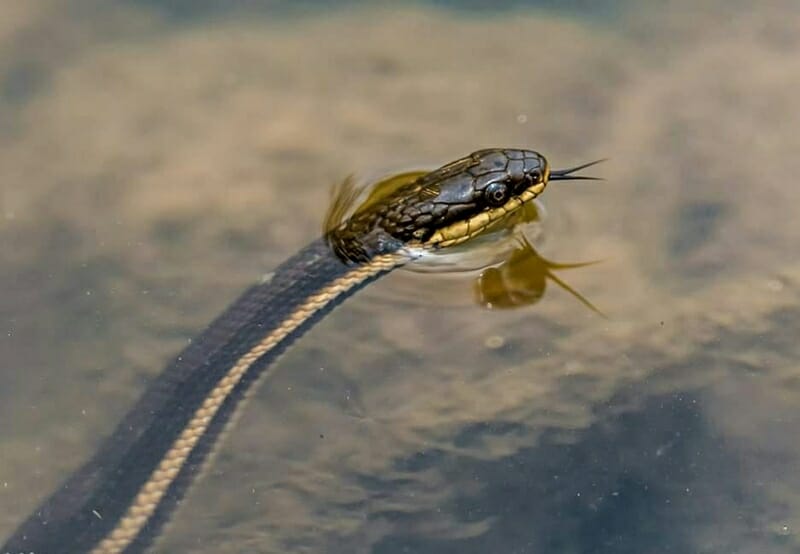 Queen snakes are a non-venomous species of snakes. They are usually found near moving waters like rivers or streams with shallow bottoms, but can also be found near other water bodies like ponds or lakes.

Queen snake numbers have dwindled due to the destruction of their habitat, and also due to a decrease in the number of their preferred food source, the crayfish. They are now endangered and protected across many states in the United States. 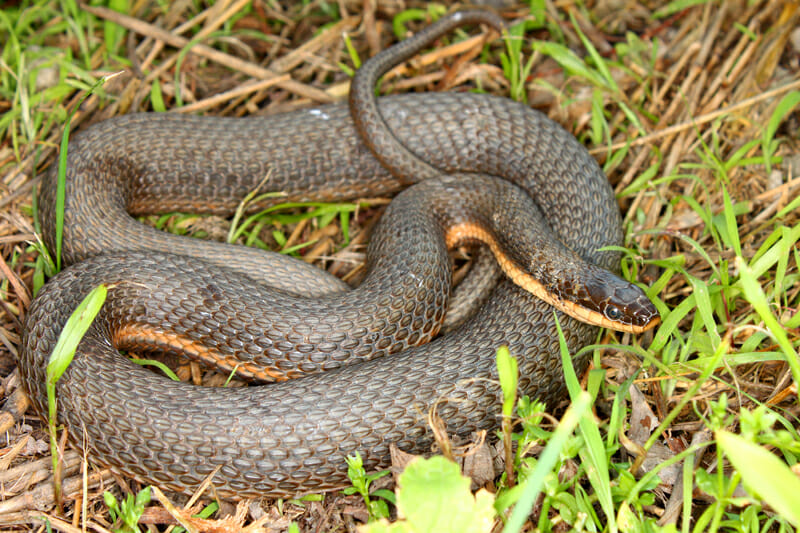