Is There a White Praying Mantis?

A praying mantis female turns white for a while and then turns brown or green in color as camouflage. They can also be pink or yellow. They can any combination of 5 colors. There are 1800 different species so there is some color variation and a few do change colors. 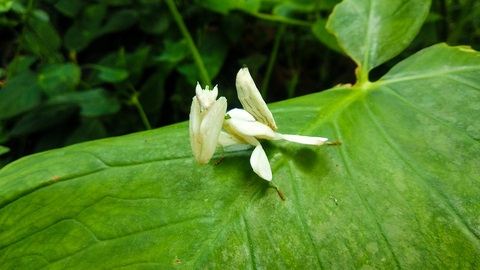 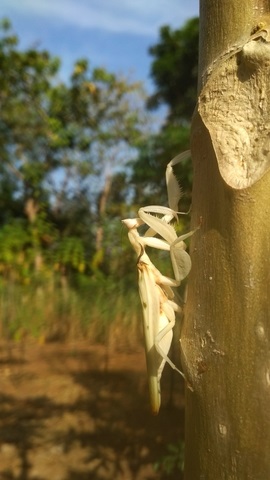 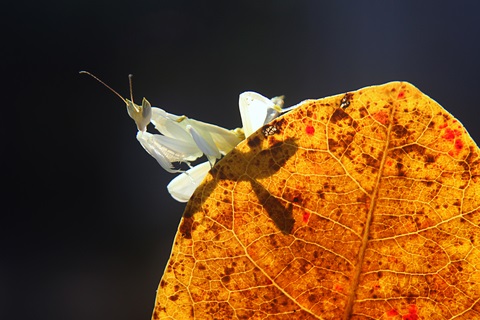 They have two large eyes, but only one ear. The praying mantis only has one ear, and it is located on the underside of its belly. Because they only have one ear they can not tell what direction the sound is coming from.

The Females Are Known to Cannibalize their Mates. Sometimes a female eats her partner when they are done. Sometimes they are not done yet. As it turns out, sometimes a female beheads a male before they finish as when the brain is not connected the male is less inhibited which results in a better time for the female. Sex cannibalization occurs 25% of the time.

The Praying Mantis can turn their head a full 180 degrees. The mantids are the only family of insects that can do this, and it comes in handy as the ability to sneak up on them is greatly diminished. This is a handy skill to have especially considering they only have one ear and can not tell where sound is coming from.

The life cycle of a praying mantis is pretty short. Typically, they only live from Spring to Fall, but they can live as long a year. The adult portion of their life only covers 6 months of that period.

They have stereo-Vision. Stereo-vision is the ability to look at the same spot with both eyes. This allows them to determine distance more accurately than any other insect as they are the only known insect to have stereo-vision.

Some Cultures consider the Praying Mantis as mindful. There is a lot of symbolism related to the praying mantis. People associate t his insect with mindful movements, meditations, contemplation, balance, awareness, and intuition.

Most adult praying Mantises have wings. Wings are not present until adulthood in any species. Some species do not have wings at all. Even if wings are present, only the males can actually fly.

The Word Mantis comes from the Greek work mantikos. This work means prophet or soothsayer. These insects were considered to have supernatural powers by many early civilizations including Assyria, the Egyptians, and the Greeks.

The praying mantis is skilled in defense against predators. Some of their predators include hornets, ants, spiders, birds, lizards, and frogs. One of their biggest defenses is the ability to camouflage. Many praying mantises are brown or green which blends in with leaves and twigs. They are also avid hunters. They stand still for long periods which helps them evade predators. Some of them even have a very flat profile which assists them further with blending in and not creating shadows.

They Look cool – and were named because of this fascinating characteristic The common name for this insect – Praying mantis – came from the fact that when their forelegs are clamped together it appears that they are in prayer.

Although their name was chosen for how they can look like they are in prayer due to their back legs, they could have just as easily been named the preying mantis for their front legs. This insect can fold its front legs bent as if in prayer it can quickly attack other insects that fly into range. For instance, if a fly or bee flies within reach, the praying mantis can quickly extend its arms and grab the other insect before they even knew what happened.

The Praying Mantis has Inspired 2 Different Martial Art Styles. For being an insect, this is an impressive feat. The two styles are called the Northern praying mantis style and the southern praying mantis style. I know the names sound related, so you would assume the same people created them, but that is not what happened. They were created independently of each other. These styles were named after the praying mantis because this insect is such an efficient hunter.

The northern style is inspired by the praying mantises aggressiveness. The southern style is more about quick bursts of power and close-range fighting.

They are popular pets and do not bite.

They can eat large prey. Even though the size of the praying mantis is usually between one and six inches, they can eat much larger prey including small birds, mice, and lizards.

Their closest relatives are termites and cockroaches. The belief is that mantids, cockroaches, and termites all descent from a common ancestor.

The variety of praying mantises is astounding. It is not just that there are at least 1800 different species, it is that some species look really different from what you may originally be picturing. Most people picture a praying mantis as brown or green and many of them are. Some mantises just are more valuable to segments of the population.