What Birds Can I See in North Carolina?

The State of North Carolina has documented more than 460 species of birds, with more than half of the species found breeding here. With lots of diverse habitats from the coast to the mountains, a remarkable array of feathered fauna is found here in any season.

You will commonly see:

The northern cardinal is one of the most common birds in North Carolina. They are considered significantly large birds and love traveling in pairs. You will hence usually see the male and female spending time together. The distinct feature on the male is lovely red feathers and black face markings on the beak.

The female comes in mostly brown color with slight red highlights. The northern cardinal nests in dense shrubs and eats a wide variety of diets, including; berries, insects, and seeds.

This is a small bird characterized by a short neck. The Carolina Chickadee has light gray wings while the body is white except a black throat and cap. The males and females become mates for life and love building nests in tree holes that woodpeckers have left. The female bird lays 5to 8 eggs during the spring, and both parents are responsible for feeding the offspring after they hatch. The birds mainly feed on seeds, berries, and insects.

The Carolina Wren is one of the common birds in North Carolina. The birds are primarily found in warm weather and do not commonly handle cold winters. You can recognize a Carolina wren by its reddish-brown body, long thin beak, and white throat.

They also have characteristics barring along their wings. Different from other bird species, only the male sings. These birds build a dome-like nest with a side entrance where they breed, lay eggs and feed their young ones.

Mostly defined as ‘glowing like an amber’ or ‘fiery,’ this is one of the most virtually beautiful warblers, and sighting one is a highlight for any birder. The male Blackburnian Warbler features an orange head, a bright orange throat, and streaks characterized by a black back and white accents wings. Females are similar, except they are buttery yellow in the parts the males are orange. The birds migrate from South America, arriving in North Carolina in April. They can be easily seen nesting in the tops of the tall trees scattered all across the western mountains.

This is one of the rarest breeds on breeding owls in North Carolina. The bird measures just six inches high and looks more of a toy than the vicious predator it is.

The northern saw-whet owl is mainly found at the transition zone between the northern hardwood and spruce-fir forest at the high elevation western mountains. The bird features a little owl shaped creature with a big tuft-less head, big yellow eyes, and no apparent neck.

Adults have a brown streak, while the juveniles have chocolate upperparts, tawny ochre breast, and a white patch between the eyes.

The red-cockaded woodpecker is one of the endangered bird species you might be lucky to see in North Carolina. These birds are black with white ladder-backed patches, a solid black tail, and around white cheek patch. This bird species requires a pine habitat and commonly builds their nests in wild trees infected with red heart fungus disease that softens it for easier excavation.

These habitats are disappearing and are now often found on public lands managed explicitly for the birds and located near the coast in the Green Swamp area and Croatan National Forest.

The Tundra Swan is one of the biggest birds in North America, measuring more than fifty inches in length and a wingspan of up to seven feet. As its name suggests, the bird breeds in the farthest reaches of Alaska and Canada.

However, the birds can be easily seen in North Carolina when they come in vast numbers to the coastal plain during winter to escape the chilly north. Adult tundra swans have a distinct white plumage, long necks, and black bills give them an epitome of grace and beauty.

The gray offspring have the same elegance and breathtaking sight when swimming together across the quiet lake in an infinite number.

This bird is one of the smallest avian species in North Carolina. To quickly find the golden-crowned kinglets, it is essential to be able to recognize their tsee-see-see pitched calls which they frequently utter. When you hear the sound, look up and check for a three-and-a-half-inch bird, Olive-backed with yellow or orange crowns bordered by a white and black line.

The birds usually move in flocks, often six to ten birds, and sometimes flock with other small woodland birds such as the nuthatches, downy woodpeckers, and titmice. 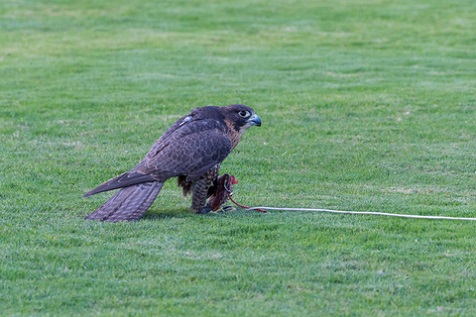 North Carolina is home to a majority of the powerful and swift peregrine falcons that come year after year to the mountain clips at the western end of the state. The peregrine is a relatively big bird with long pointed wings. The adults are blue-black with a dark barring below, while the young ones are similar but browner. The bird is one of the quickest birds worldwide, clocking at more than 180 mph when diving for prey. The best peregrine observations are from nesting areas but might also be seen from hawk watch sites during the fall and winter.

A seven-year-old kid with crayons and creative imagination might draw something similar to the painted bunting bird. The male painted bunting features a royal blue head and shoulders, lime green upper back, a reddish belly rump, throat, and eye-ring, and an olive-brown tail and wings. Together with its greenish female mate, the painted bunting is found on the south Atlantic coast during the summer. In North Carolina, the bird is primarily located in the barrier islands and close coastal areas from Carteret county, mainly in April to early fall.

You have to wait patiently to reap the reward. Some bird species are more shy and hesitant than others. They seldom show their presence and fly off quickly if feel threatened. Therefore, you have to sometimes sit tight at a spot and wait for the bird to show up. Wearing dull clothes, not making any sudden movement and waiting patiently will eventually compel the bird to come out.

If you are in a car, stop it for a while where you expect birds. If you are on foot, take cover behind some bush or crouch down. The worst mistake you can commit is to get frustrated and leave your hiding spot.

Irrespective of whether you are just a courtyard bird watcher or an expert birder, North Carolina is a must-visit State destination when it comes to avian fauna.