Geese vs. Ducks – Differences and Similarities

Geese have shorter necks, are bigger, and more aggressive that ducks. Geese honk while ducks quack. Geese are herbivore and ducks have flatter bills and are omnivore.The top picture is goose and below is a duck. 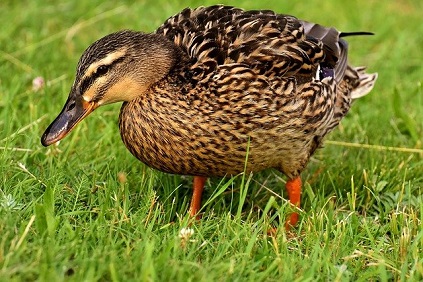 Geese and ducks are different. However, the confusion between the two is understandable. Although geese are not ducks, there are a lot of similarities between the two.

The change in classification of the waterfowl bird family has changed, where most of them look like ducks. Therefore, telling the difference between geese vs. duck could be difficult at times.

Geese may not necessarily be ducks, but they are equally captivating like ducks. Therefore, take your time over the next few minutes to learn the differences and similarities between ducks and geese that you can easily tell the differences across them.

Are geese related to ducks?

Geese are related to ducks. Indeed, both of these birds belong to the waterfowl family called Anatidae. Other than ducks and geese, swans are also members of this family.

Experts believe that ducks and geese are derived from the subclade bird family, which happened about 20 million years back. Nevertheless, birds in this genetic family include 146 different species of waterfowl birds. However, swans, ducks, and geese are the ones with the closest relationship with one another.

Geese vs. ducks’ differences and similarities

Despite the similarities between the two birds, there are also a lot of differences. Let us look at the features that differentiate the two birds for the ease of your identification.

Each of the birds has noticeably distinct vocal voices, which is another factor/aspect that differentiates the two birds. Ducks communicate by producing quacking noises. On the other hand, communication among the geese entails the production of a honking vocalization.

The neck is a good indicator is whether a bird is a goose or a duck. The duck’s neck is usually shorter than that of most geese species. The snow goose’s neck is much shorter, in fact almost the size of a duck. The vertebrae making the neck of a duck are usually 16 or less. On the other hand, the vertebrae making the geese neck can be as many as 23. This shows just how long the size of a geese neck is.

The body size and composition

The size and body composition are other essential features that can help distinguish whether a waterfowl is a goose or a duck. On average, the size of geese exceeds that of ducks. The length of the geese’s bodies and legs exceeds that of the ducks. The duck bodies are relatively shorter, like their legs are, when compared to geese. Geese are more aggressive to people and will chase you.

The two birds are very distinct in color. Indeed, this is one of the most notable physical features that most people use to differentiate the two birds. There are higher chances that geese are white in color, black or grey. However, ducks have different color schemes. Besides, male ducks have brighter coloring than their female counterparts. However, the colors between the two are not distinctive, but their sizes could differ.

The beak sizes differ between ducks and geese. Form the ducks, and bills tend to be flatter. Besides, their nostrils sit high up on the bills. However, the case is different for a goose because their bills are relatively shorter than that of ducks. Their nostrils are also placed on a much lower location on the bill. Another interesting feature concerns the goose bill’s position because they are much higher on the face.

For this reason, they reach close to the top of a goose’s head. The duck’s bill is located in a lower face position and does not reach the bird’s eye level. If you are keen on observation, you can quickly tell the difference between the two birds.

Geese are relatively hardy than ducks gauging the two on the longevity scale. On average, a wild goose lives longer than a wild duck.

The average lifespan of most ducks is somewhere between 10 and 15 years. On the other hand, geese can live between 15 and 20 years on average. It is also important to note that farm-raised ducks and geese have longer lifespans than wild waterfowls. Different factors weigh in determining the differences in lifespan of where a bird has grown.

Size of egg and laying frequency

Ducks can lay two to 7 eggs on their nests. But a wild goose will only lay a single egg at a time of their nest. The wild ducks can lay between 5 and 17 eggs at a time, depending on the breed in question. Interestingly, a goose egg is relatively bigger than a duck egg. Indeed, geese eggs can sometimes be two times bigger the size of a duck.

In most cases, domesticated geese can lay only 50 eggs in a year. Surprisingly, domestic ducks can lay as many as 320 eggs, depending on their environment and the duck breed.

Both ducks and geese prefer to eat aquatic and land plants. A goose is considered to be a herbivore creature because it sticks only to foliage and plants unless under dire situations. However, ducks are omnivores, which means that they can eat both plants and sometimes fish or frogs, among other invertebrates.

Other than the Hawaiian Nene geese, both ducks and geese’s feet are webbed. Besides, the feathers of each of these birds are designed with unique features that enable them to shed off the water instead of absorbing it.

Both ducks and geese are monogamous in terms of breeding. As such, they can only breed with one partner at a time. For every breeding season, wild ducks will have a new breeding partner. Geese, however, remain with one breeding partner for a very long time in their lifetime.

Geese are attractive migratory birds that live around and on large water bodies, just like the ducks. Geese are very similar to ducks and will usually waddle like ducks. Most people mistake geese for ducks. Others wonder whether geese are a different species for ducks.