Jet skis are water vehicles used by water enthusiasts and professionals alike. Unfortunately, many new users don’t know how a jet ski functions. So they often get confused about its mechanics.

Jet skis don’t come with any sort of transmission because they have a completely different system than a car. These water vehicles are controlled by an impeller and have three distinct motions – forward, reverse and brake. Also, there isn’t any space inside a jet ski to fit a full-fledged gear transmission.

Do Jet Skis Have A Clutch Or Transmission?

No Jet skis don’t have any clutch or transmission. They have a completely different mechanism for movement than standard land vehicles.

The engine of a jet ski directly connects with the impeller for proper functioning. A physical barrier between the motor and the impeller can redirect the water from the front of the car to the back, which moves the ski forward.

Or it can channel the water from back to front, creating a reverse motion. Alternatively, it can also release water straight down, which means the ski is in place.

Jet skis come with two different handlebars like motorcycles. But they function entirely differently. For example, the left lever is NOT a clutch on a jet ski. Instead, it’s the lever for reverse motion and the brake.

So, you can say that every Jet Ski is technically automatic. It doesn’t need a gear transmission or clutch to change speeds or start the engine. It can basically run using the propellers effectively. A jet ski can also change its direction and can stop whenever it needs using the propeller system.

How Do Gear Transmissions Work?

Think about an average car. It has wheels on both sides so you can move while the wheel rotates and pulls you forward.

When a car needs to start, you have to put the engine into first gear to increase its torque. This, in turn, increases its speed to shift to other consecutive higher gears. This build of momentum needs to be gradual and slowly build up from there. This is where the gear transmission comes into action.

Why Don’t Jet Skis Have Gears?

Although the working principle of a Jet Ski engine and a car engine might be comparable to some extent, jet skis are way more straightforward in some cases.

Jet skis pull water into it and then jettison the water out of its shell. This maneuver lets the Jet Ski move slightly forward. However, the engine does most of the work. It generates power while pushing the water backward and leading the Jet Ski towards the intended direction.

Water goes inside the Jet Ski through an opening called the impeller. It is a motorized fan that helps in pulling the water into the jet. It’s the complete opposite of a typical fan, which just pushes the air outside.

The impeller provides the propeller with a constant stream of water so that the jet propeller can effectively move it out of the craft. Then the propeller drives the water through the back and drives the Jet Ski forward.

Engines are the most crucial factors for powering a jet ski. The more powerful it gets, the better mileage and top speed it can achieve.

Most of the jet skis come with a 150-horsepower engine, granting them a speed of around 40 miles per hour. But the more advanced model comes with a much faster pace and more powerful engines.

A Jet Ski engine works much differently from cars because they don’t need to increase their speed gradually and don’t have any wheels. So increasing the RPM in a ski is not a question. In addition, the motors inside a jet ski run differently according to the water flow & speed and can be adjusted accordingly.

Another important reason is that they don’t need gears because there is no room for transmission to fit inside a jet ski. The motors are already fitted tightly without the need for any sort of transmission.

Moreover, the added weight from a transmission might lead to the decreased speed of the ski. To build up momentum, your jet ski needs to be as light as possible. 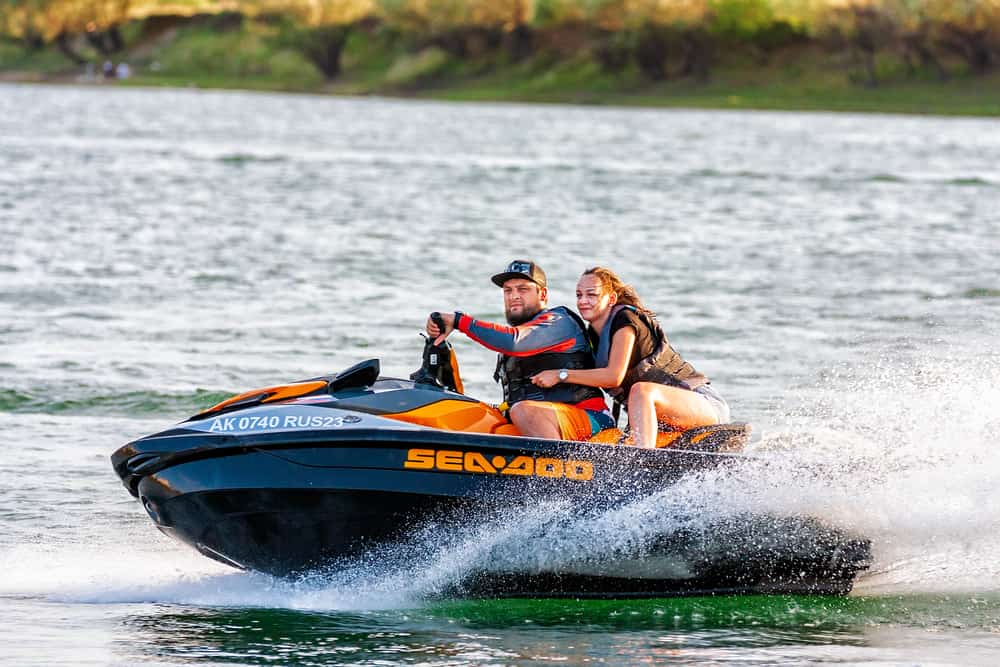 The Directional Components of A Jet Ski

Specific components of a jet ski make the whole process viable. If you want to dive deep into the world of jet skis and understand why they don’t have a transmission, you need proper knowledge about these features. So here are the components inside a jet ski that make it work.

Regular boats create the force by spinning a fan, also known as a propeller, to ramp up the vehicle’s speed. A propeller can spin any way it wants, be it forward or reverse. It can even remain still when the engine is running.

Every propeller needs a mechanism to lower or raise it according to the depth of the water. As the propeller remains in the lower regions of a boat, it can get damaged while running in shallow waters.

Impellers are internally mounted fans that help the jet ski to move forward. It comes with a unique ‘corkscrew’ design that helps draw a large amount of water. Then, it rushes the water out through a nozzle.

An impeller has some pretty obvious advantages over a typical propeller design. It is much more durable and has reduced injury risk because of the lack of moving parts. Also, it can operate in shallow waters without damaging itself.

And finally, because of the lack of transmission, there is a lower risk of mechanical failures of an impeller in a jet ski.

Do Jet Skis Have Brakes?

Well, sort of. Land vehicles use traction to allow wheels to slowly lose rotation which causes the vehicles to brake. On water, jet skis don’t have wheels nor do they rely on traction. In case of jet skis, propellers are directed forward which pushes the Jet Ski backwards slowly neutralizing the speed.

When you press the brakes on a jet ski the first thing that happens is the power to the engine is completely cut off. So, now the Jet Ski is moving completely relying on momentum. And as we all know, any system running on momentum can be neutralized by applying an equal force from the opposite side. And that is exactly what happens incase of jet skis.

The propeller pushes water forward acting against the motion of the Jet Ski and slowly puts it at a halt. But if you hold the breaks for too long it will start going backwards.

Have fun cruising the high seas!