Where to Hunt for Arrowheads

The best place to look for arrowheads is in places the Native Americans used to frequent. You should begin your search at a creek or stream that is on private land. Sources of water such as these were integral in the way of life for these people, and as such, you can find many signs of them being there.

Arrowheads, being made of stone, tend to be found at the bottom of these water sources. It is because they get washed around and eventually end up there.

In flowing bodies of water, you can follow where the current goes and see where the rocks build up. From there, you can begin searching for arrowheads. The flowing water will also help you wash away anything small, making it easier to find what you are looking for.

The best scenario you could hope for is one in which two bodies of water meet. Not only would this mean a nice buildup of rocks and potentially arrowheads, but it is typically in these spots where the Native Americans would hunt. 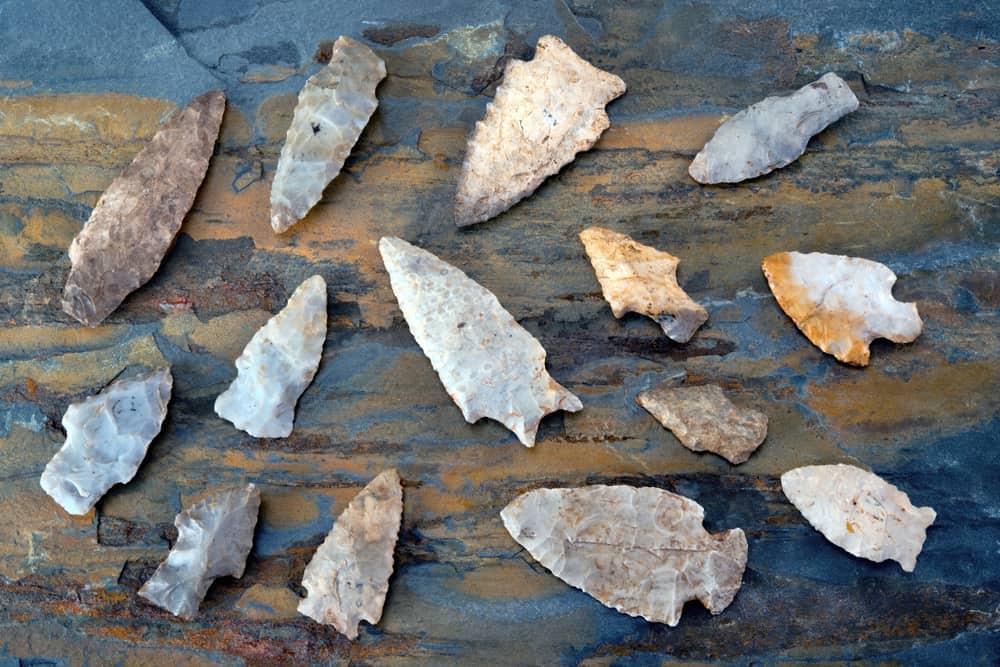 Bodies of water are the best place to search for arrowheads, but not all of them are equal. Some bodies of water have little to no chance of having an arrowhead, while some have a much higher probability. One tip to determine whether a body of water is worth your time is to check the bottom of it.

Rivers, creaks, and streams with a sandy bottom have a slight chance of having any arrowheads. The sand makes it not only difficult to look through, but the arrowheads are large enough that they would not be submerged in the sand and would instead just have been washed away.

You have a better chance of searching through pea gravel, which allows smaller arrowheads to pop up. The same goes for small gravel, where you can find any arrowheads around the same size as the gravel.

Medium to large gravel bottoms is the best for finding arrowheads of any size and kind. The size of the gravel allows any arrowhead to find refuge. Whether they are small or large, they can be found in these water bottoms, see video: 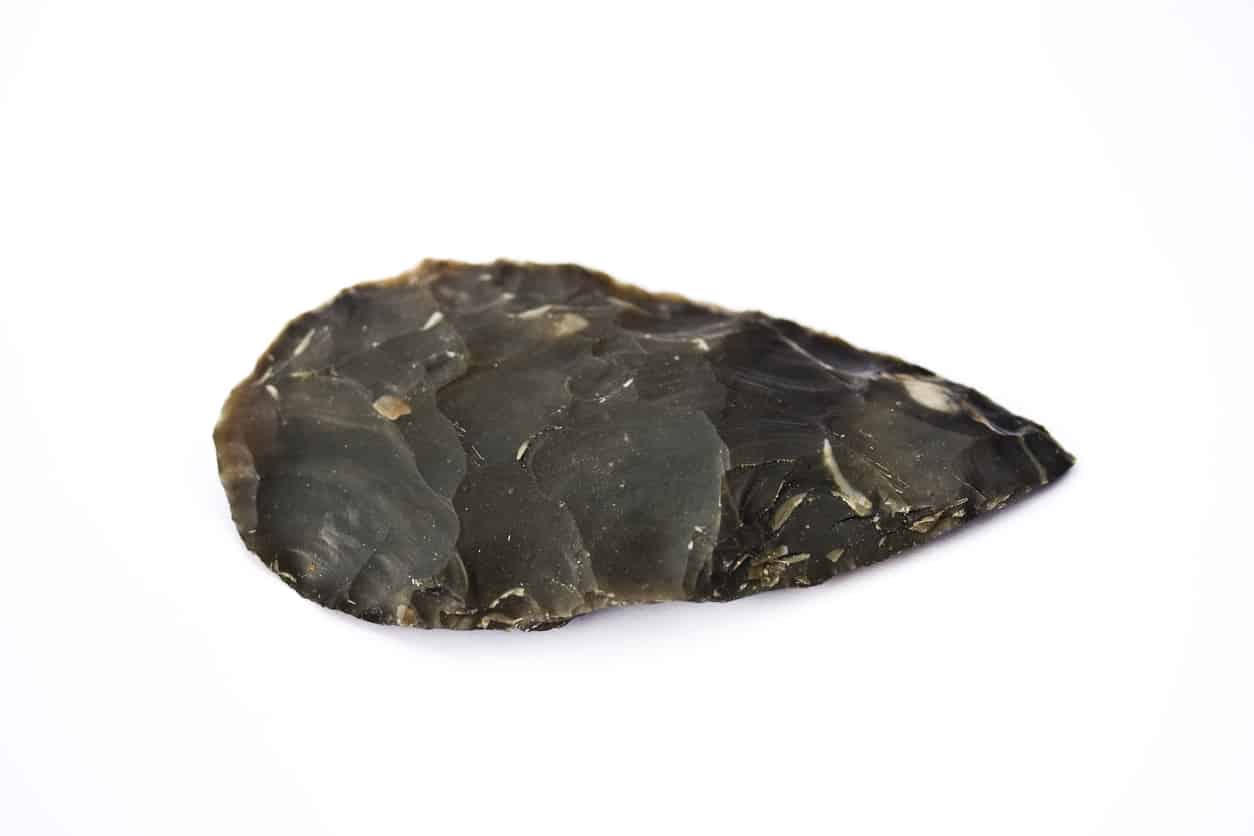 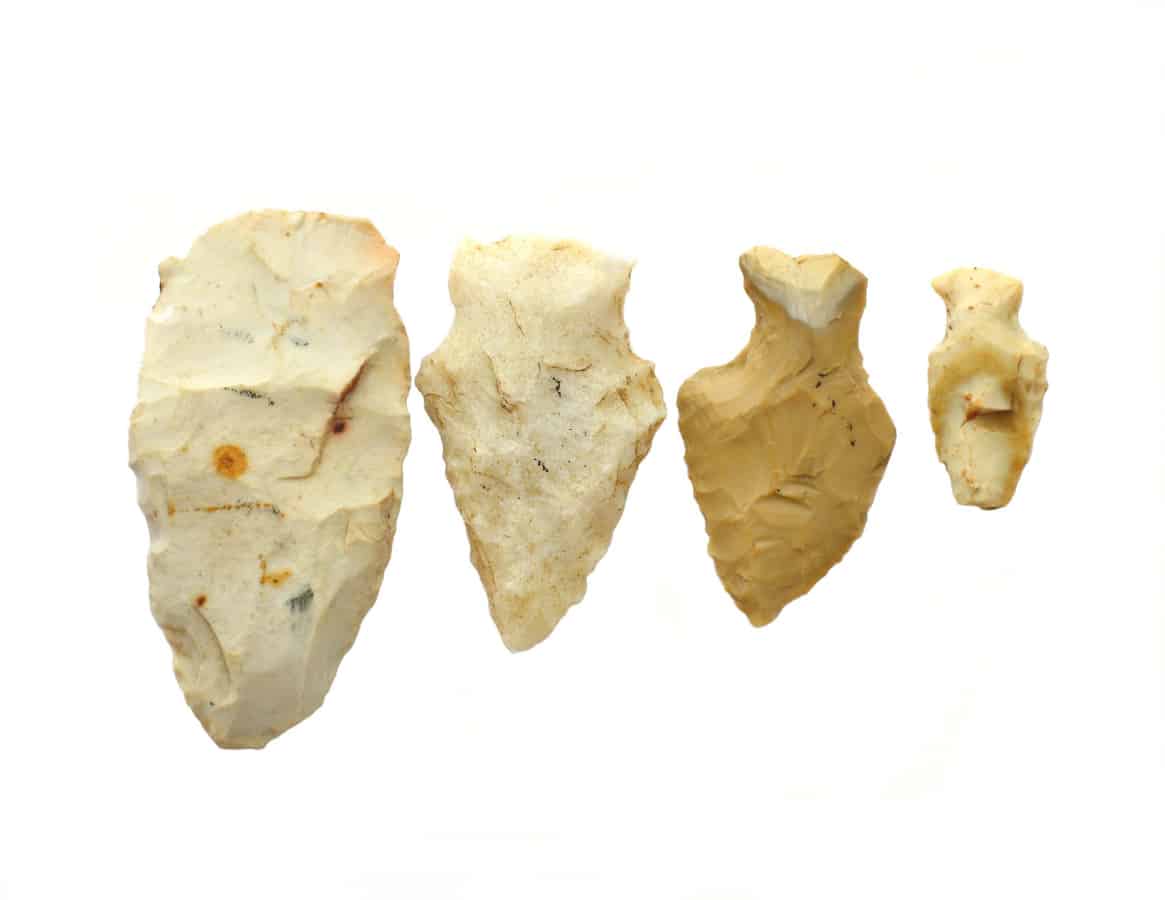 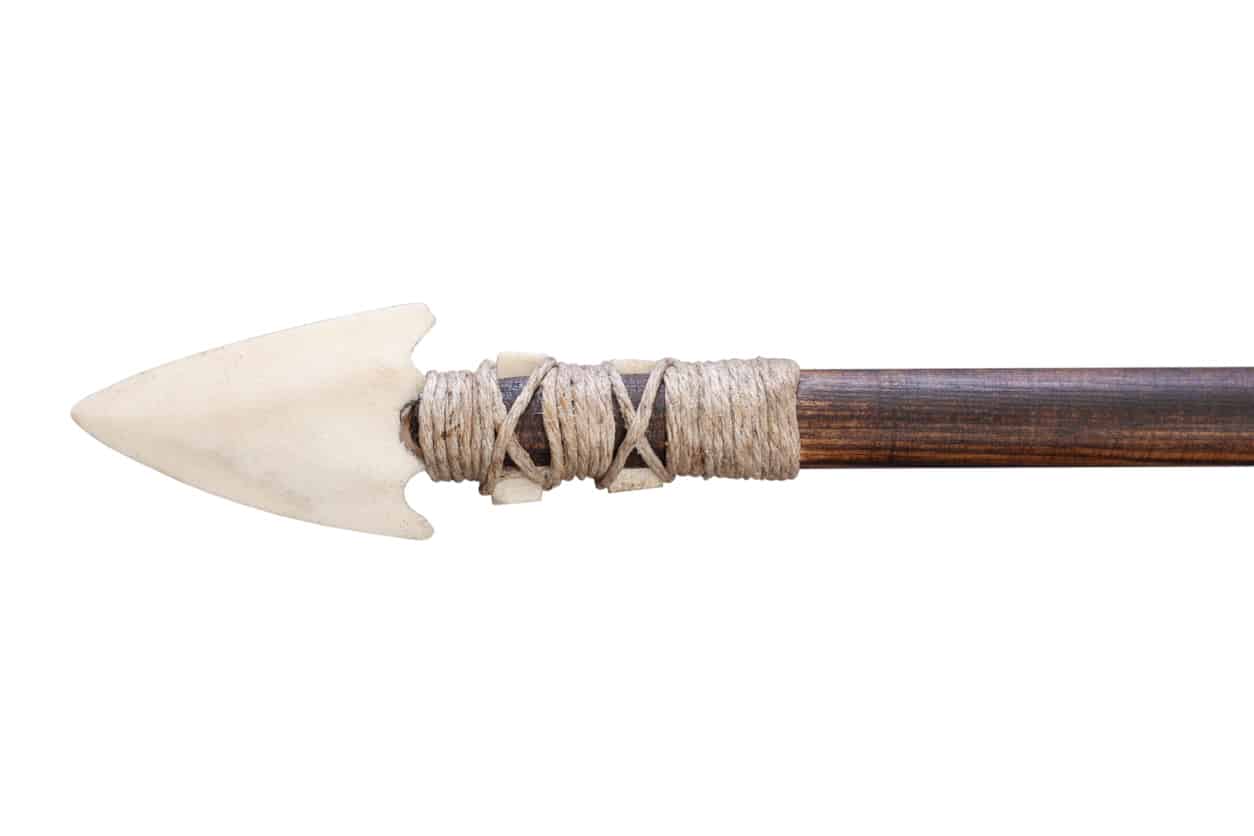 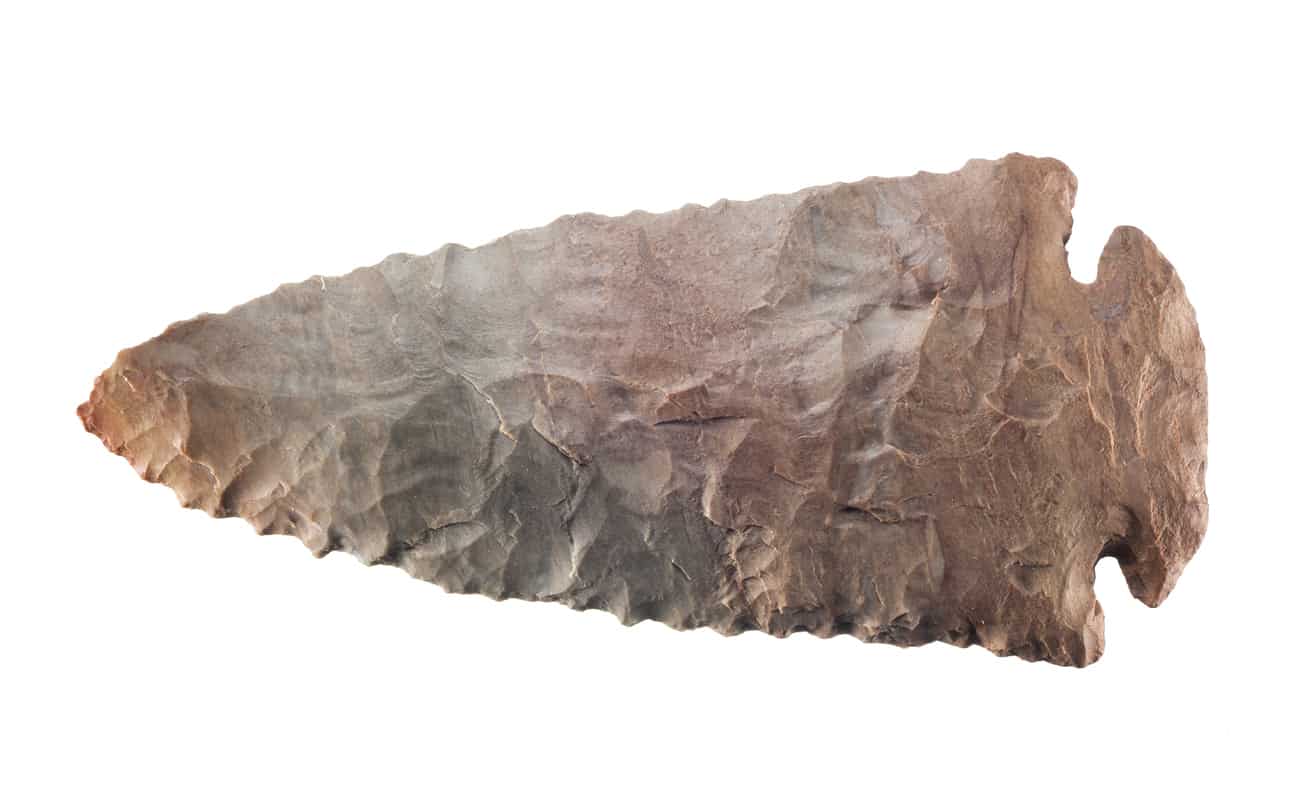 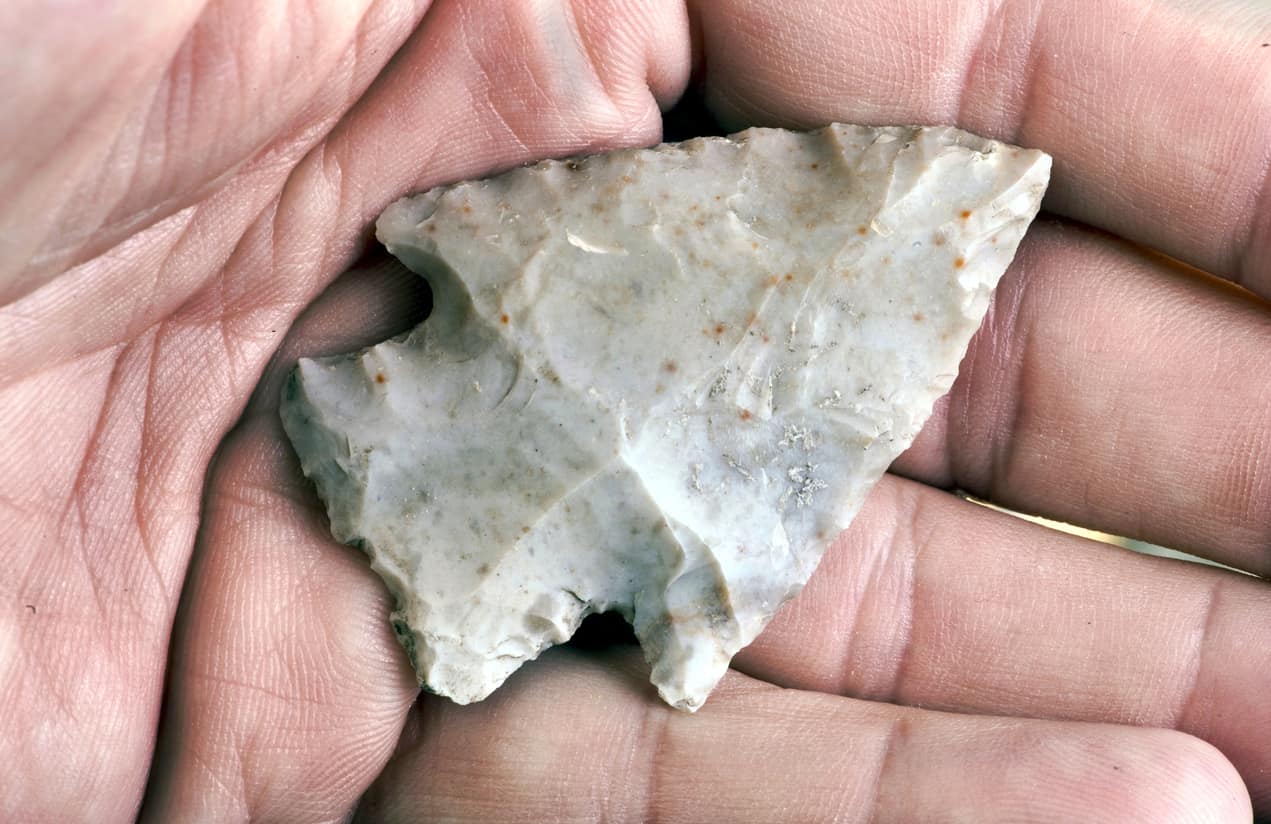 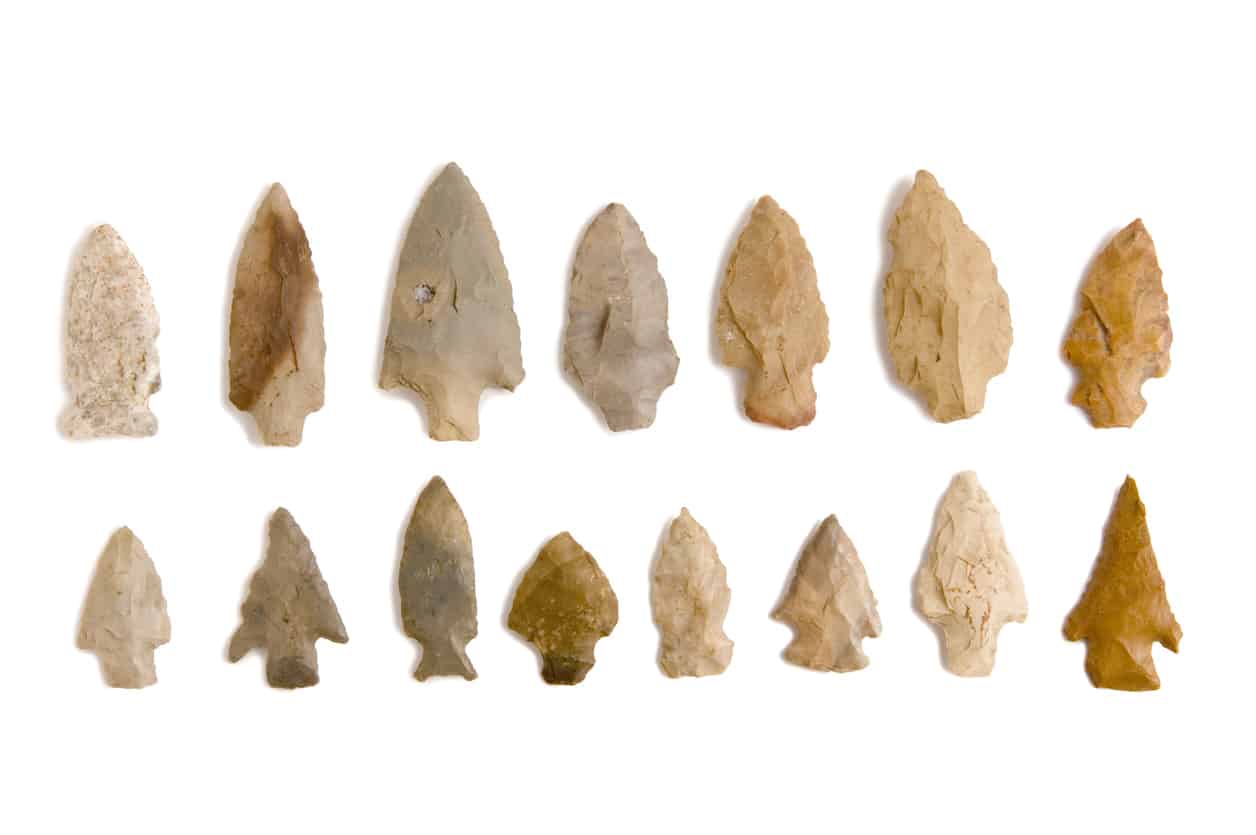 As mentioned earlier, arrowheads are crude weaponry formerly used by the Americans Native to that area. They are fashioned out of stone and were used for their hunting before they discovered metalworking. There have been discoveries of wooden and metal arrowheads, but these are rare and not commonplace.

Typically, they were carved from various stones depending on how easy they were to work. Native Americans naturally chose stones that could be broken and chipped easily. These stones were primarily flints, but arrowheads made of chert and obsidian were standard as well.

Native Americans used a technique called percussion chipping, where they would repeatedly hit the edge of the stone to form its shape. Then, they would shape them to have a sharp pointy tip with a thinner flat bottom.

The flat bottom was there so that the arrowhead may be fastened on the end of a stick to make an arrow. Unfortunately, the sticks these arrowheads were attached to have deteriorated over the years, and the arrowhead is all that remains.

You can buy and sell them for $5-$25 each at flea markets or online.

The legality of arrowhead hunting

Before you go arrowhead hunting, it is vital to research the legality of it in your area. It is entirely legal to go hunting for arrowheads in private land as long as you do not do so on sacred Native American sites. It is illegal to dig up any arrowheads on their burial sites.

Furthermore, you are not allowed even to pick up arrowheads on public land, see https://www.fs.fed.us/lei/archeological-resources-protection.php. Ignorance of the law does not excuse you, so it is best to check if you are on private or public land and if there are any burial sites there.