Texas is home to 12 kinds of Owls – (Pictures and Descriptions)

Owls love the warm weather and abundant mice found in Texas. The most common types you will see are:

You might have come across this type. It is widespread all over Texas, and many people are familiar with the look of the great horned owl as in picture at the top of page. You can identify this gorgeous bird from the two tufts on their feathers. They have got their name from those tufts that look like horns. Also, the great horned owl is the largest in Texas. They measure two feet in height, and the wingspan is up to four feet. They make hoot sounds from their tales during nights. You might hear this sound more in winter and fall.

They breed in January and like swamps and woods. However, you can also find them in suburbs. They are terrible predators and can attack anything of their size or even smaller. They eat rabbits, gophers, squirrels, skunks, and similar birds.

When it comes to appearance, they have mottled gray-brown and reddish-brown faces. Also, you can see a white patch on the neck of the great horned owls. Their ferocious gaze can scare any. 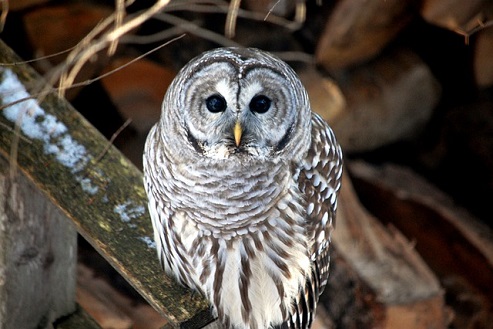 These owls are short-tailed, stocky, and round. Also, they have tuftless and smooth heads. The eyes are almond-shaped, big, and dark brown. You might confuse between spotted owls and barred owls for similar eyes.

When it comes to the face, they will have heart-shaped and pale faces. They have a venerable and wise look, unlike the previous one. Also, these birds are curious and love to observe from far. Apart from that, you will find the color remarkable. Also, they have a brown and white check on their back. This type is common in Eastern Texas. Barred owls eat mice, chipmunks, small reptiles, squirrels, and some small birds. 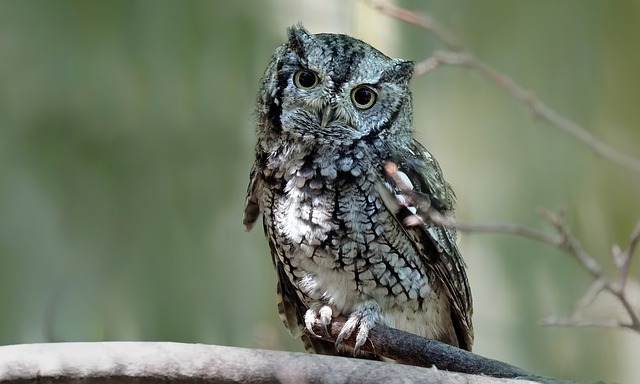 You will find this type in the eastern forest. These owls prefer to live in clearings, woodlands, suburbs, and parks. You can recognize them from their small size. Eastern screech owls are of six inches only. Also, you cannot see them during day hours. They are nocturnal owls, and you can hear them while passing at night.

These owls will have two color variations. These are gray morph and red morph colors. Also, they will have big heads, ear tufts, no visible ears, and yellow and large eyes. For this reason, we call this owl screech owl, and the screech is known as whinny. They like to hunt at night. They eat small mammals, nighttime bugs, and small reptiles. 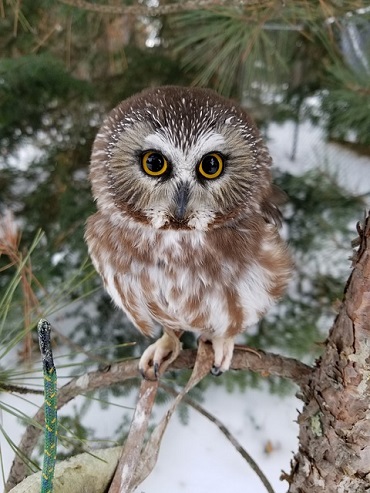 Northern Saw-whet Owls have got their name for their unusual vocalizations. Also, the scraping sound gives them a unique recognition. They make soft hoods and save the saw-whet sound for harmful incidents. You will find these little creatures in woodlands and home forests. They like to live in the holes vacated by woodpeckers.

Also, they are rare in Texas. You can have a glimpse of this type in the Northern part. They usually do not exceed seven to eight inches. When it comes to appearance, they have white eyebrows, light-brown faces, and dark-brown backs. They eat mice and rodents. 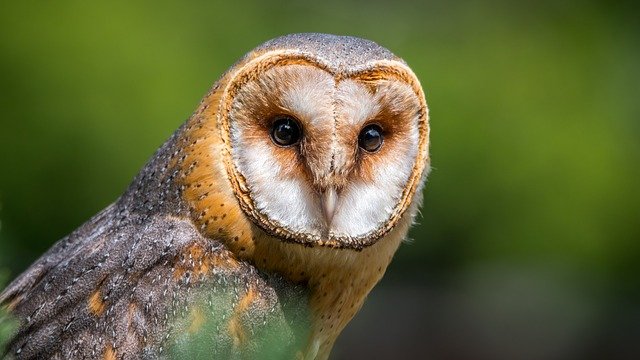 You might find this type the most visually striking. Barn owls have heart-shaped and pale faces and black and wide eyes. Many think that their faces are unsetting since they look ghost-like and bright in the dark. Some also find this type beautiful for the distinctive look only. The mottled tawny-gray feathers and golden backs give them a distinct look. However, when they are a bit scared, they remain graceful and silent. They breed throughout the year, and you can find them all year. Also, barn owls are nocturnal.

Therefore, you might hear their drawn-out screeches and eerie at night. They prefer to live in church steeples, haylofts, and chimneys. Even if they are large, they are shy. They will not show any hostility if you approach them. If you explore their nests, they will try to fly off instead of causing any harm to you. 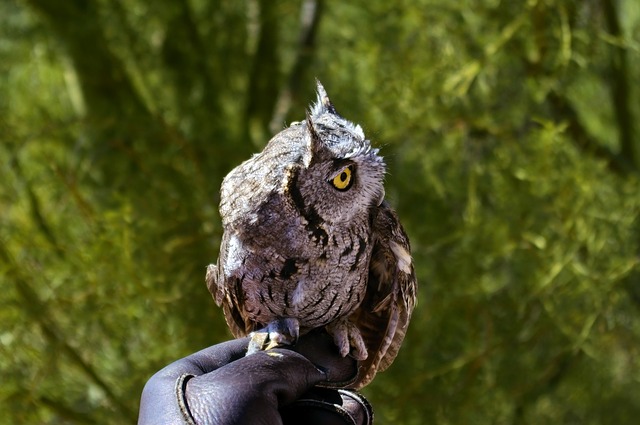 You will appreciate the round, stocky, and cute appearance of western screech-owls. These birds have a reddish, brown, or gray color. Also, they have gray streaks on the abdomen. When it comes to bills, they are black and small. They stay in the eastward and Trans-Pecos, western plateaus, and even in forests.

You can recognize them from their yellow eyes. However, the body of this bird blends with the tree bark. Apart from that, they have exceptional camouflage. These owls like to stay in trees. However, they are small and eat bugs, reptiles, and small rodents. They hunt at night and make a distinctive screeching call.

The Elf owl is the smallest in North America. Also, these owls are known for their diminutive size. They are only six inches. If you see this owl, you will realize that it is not larger than a sparrow. You can find these tiny and adorable birds in Southwestern and West Texas. Yes, they live in ladderback holes. You might see them in fence posts, telephone poles, yucca stalks, and trees. They eat small reptiles and bugs.

In addition to the shape, they are recognizable through their v-shaped white stripe that you can see above their eyes. Also, they have a colored belly and reddish-brown wings. They make chirping and yelping sounds during the dark. 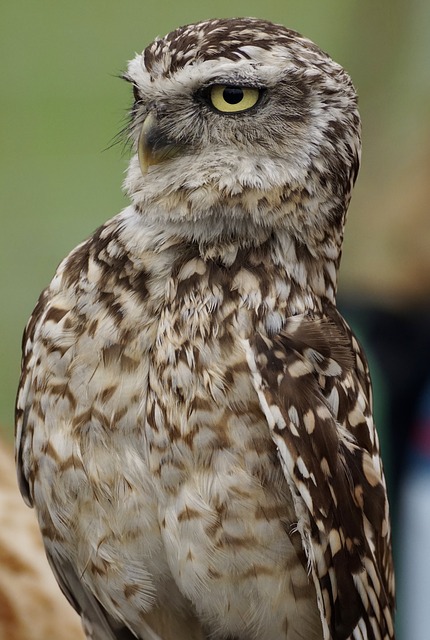 You will find burrowing owls active both at night and day. Also, they live in pastures, fields, meadows, dens, and holes. They prefer to make their homes at the vacant places of burrowing animals. They only need a bit of digging to create a safe nest for them.

When it comes to appearance, they have sandy-brown color and bright yellow eyes. Their legs are long, and they can cover ground fast and pop their heads when they sense any danger around.

You might know that most of the owls love to come out at night. But Ferruginous Pygmy Owls come out during the daytime. Also, you can find them in Southern Texas all year. However, they are uncommon in other parts of Texas. They have got this name for their 6.5-7-inch stature. However, the ET owl is smaller than this type. Pygmy owls have a striated brown and gray color. Their belly looks whiter than the back. Besides, they have some spots over eyebrows and white-streaked crowns.

The head of the Ferruginous Pygmy-Owl is round and smooth, and the eyes look impressive with an inspiring yellow color. They eat insects that include grasshoppers, small reptiles, smaller birds, and scorpions. 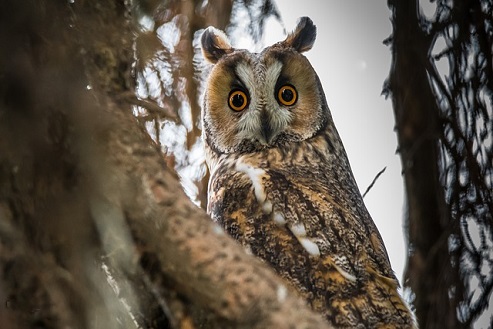 You can recognize the long-eared owl from the long feather tufts on the head. Also, long ears make them recognizable. But they are rare since they are non-native to Texas. You can occasionally find them in the Northern regions. Their ear tufts give them a similar look to the great horned owl. However, the long-eared owls look a bit different for their unique orange facial discs.

Additionally, they make low hoot sounds. They prefer to hunt at night and live on rodents. They live in the abandoned nests of other birds for around two months to prepare their hatchlings to take off. 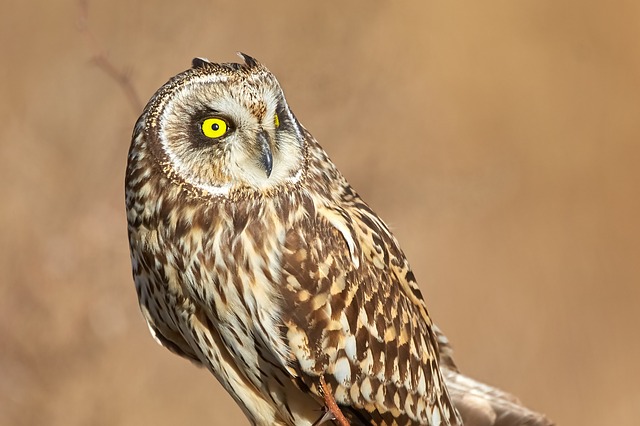 You might see this native owl in Texas in the winter. These owls love to stay in meadows, grasslands, and natural forest clearings. These owls eat rats, mice, shrews, voles, and some other small birds. Even if they are not vocal, they are opportunistic eaters. They make hooting, screaming, and barking occasionally. The appearance is also worth mentioning.

They have a short neck, round head, sandy or tawny belly, and dark or light brown back. Furthermore, they have bright yellow eyes. They do not have ear tufts, but they look impressive with uniquely ruffy feathers.

These owls have got this unique name for their flame-like patterning features. They have a reddish marking that resembles the flames. Besides, they have cracked embers and musky gray and light color with dark stripes. The eyes are entirely black and quite round. The flammulated look makes this type beautiful with inspiring camouflage. Their appearance also supports their hunting at night.

You will find these little owls in coniferous forest treetops. Even if the size is small of six inches, they can make powerful hoots.

You will find many types of owls in Texas. The largest one is the great horned owl. Also, this type is not rare. But non-natives are uncommon. As most of them love to hunt at night, you cannot find them during the daytime.