Different regions of America may have different types of wild turkeys. The classification may be important to know for the hunters. The wild turkey species may have variations in the aggressiveness of calling and their physical appearance.

Below are the six important and common varieties and types of wild turkeys.

Eastern Wild Turkey: it is the most common and highly populated subspecies of wild turkey. It can be found in 38 States. The Eastern wild turkey has the longest beard and the strongest gobbles of all turkeys. The tail of the bird is brownish. Picture: 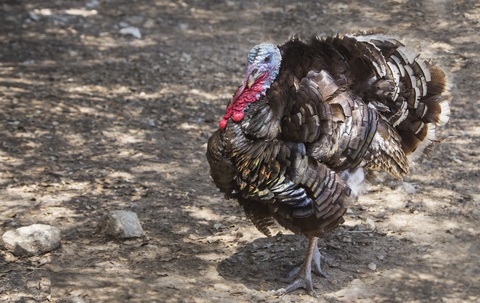 Osceola Wild Turkey: The wild turkey has long spurs and is found in Florida. These species can be a bit more difficult to hunt as they are considered to be the toughest of all the wild turkeys. The tail of the bird has a dark brown color. They can be easily found in the cypress trees located near the ponds and swamps. 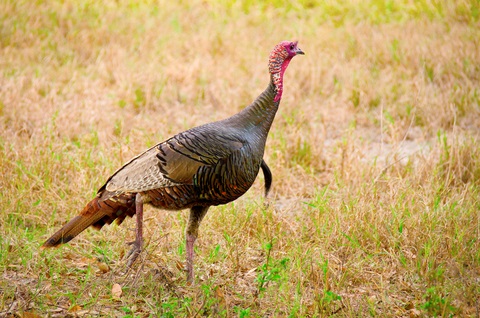 Rio Grande Wild Turkey: the turkey is found in the Western States of the USA, in the desert areas and regions. They can be found roosting in the trees located close to the water sources. The tail of the bird has a tanned tip. 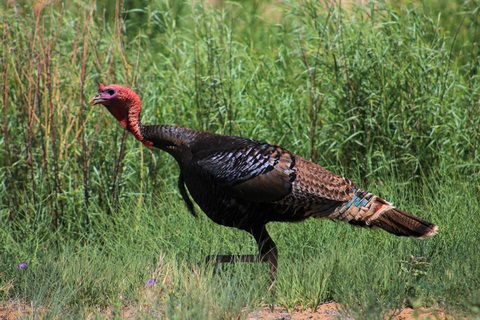 Merriam’s Wild Turkey: the bird is found in the Western region, in the mountains. The famous Rocky Mountains may have the most number of Merriam’s Wild turkeys. These turkeys have short spurs, lesser beards, and feeble gobbles. The bird has a tail with a white tip. 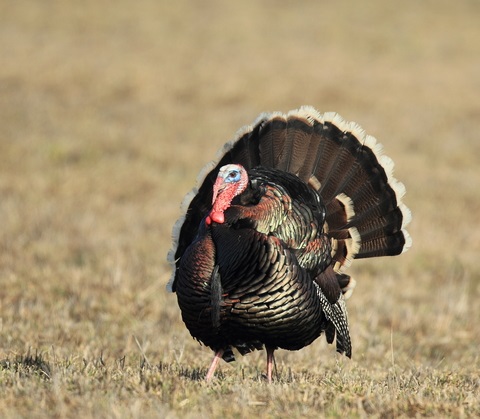 Gould’s White Turkey: the population of these birds can be found only in the State of Arizona, and Mexico, and New Mexico. They prefer mountains and an altitude somewhere between 4500 feet and 6500 feet. The spurs, beards, and gobbles of the bird are average. It also has a light-colored tail. Here is a picture: 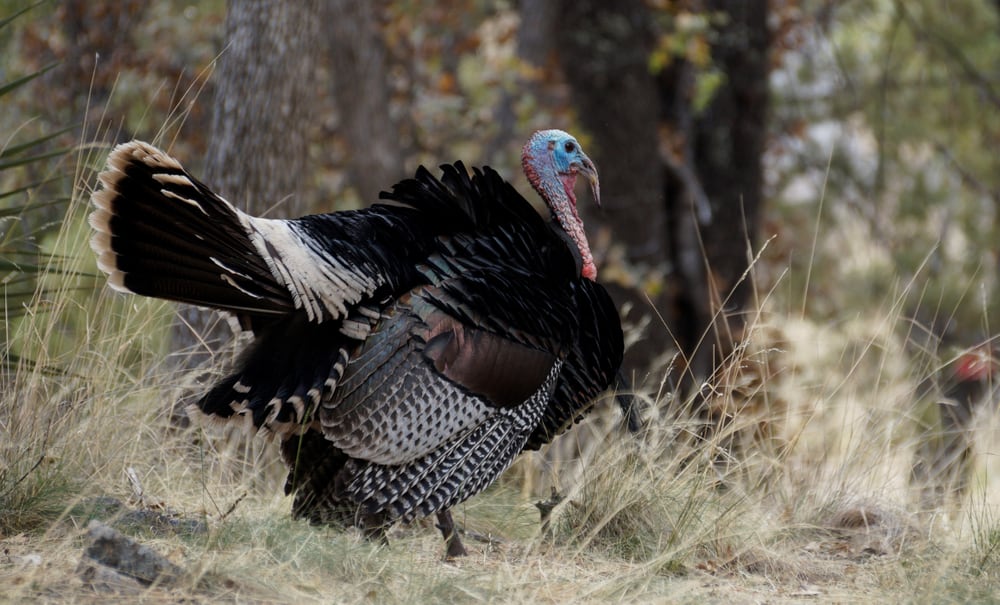 Ocellated Wild Turkey: the turkey subspecies is found in regions including Guatemala, Belize, and Mexico. They have a unique and sparkling color. These birds have long spurs and do not carry any beards. They are also the smallest in size of all the verities and subspecies of wild turkeys. 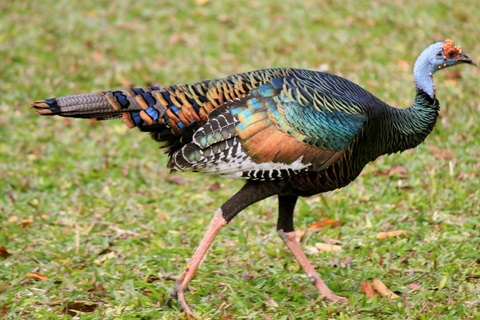 Wild turkeys have a vivid coloration when compared to domestic turkeys that are often white. The coloring is due to the natural adaptations of the wild turkeys. Coloration helps them blend easily with the natural environments and the forests. Wild turkeys may have grayish-green to reddish-yellow legs with dark and blackish body feathers. 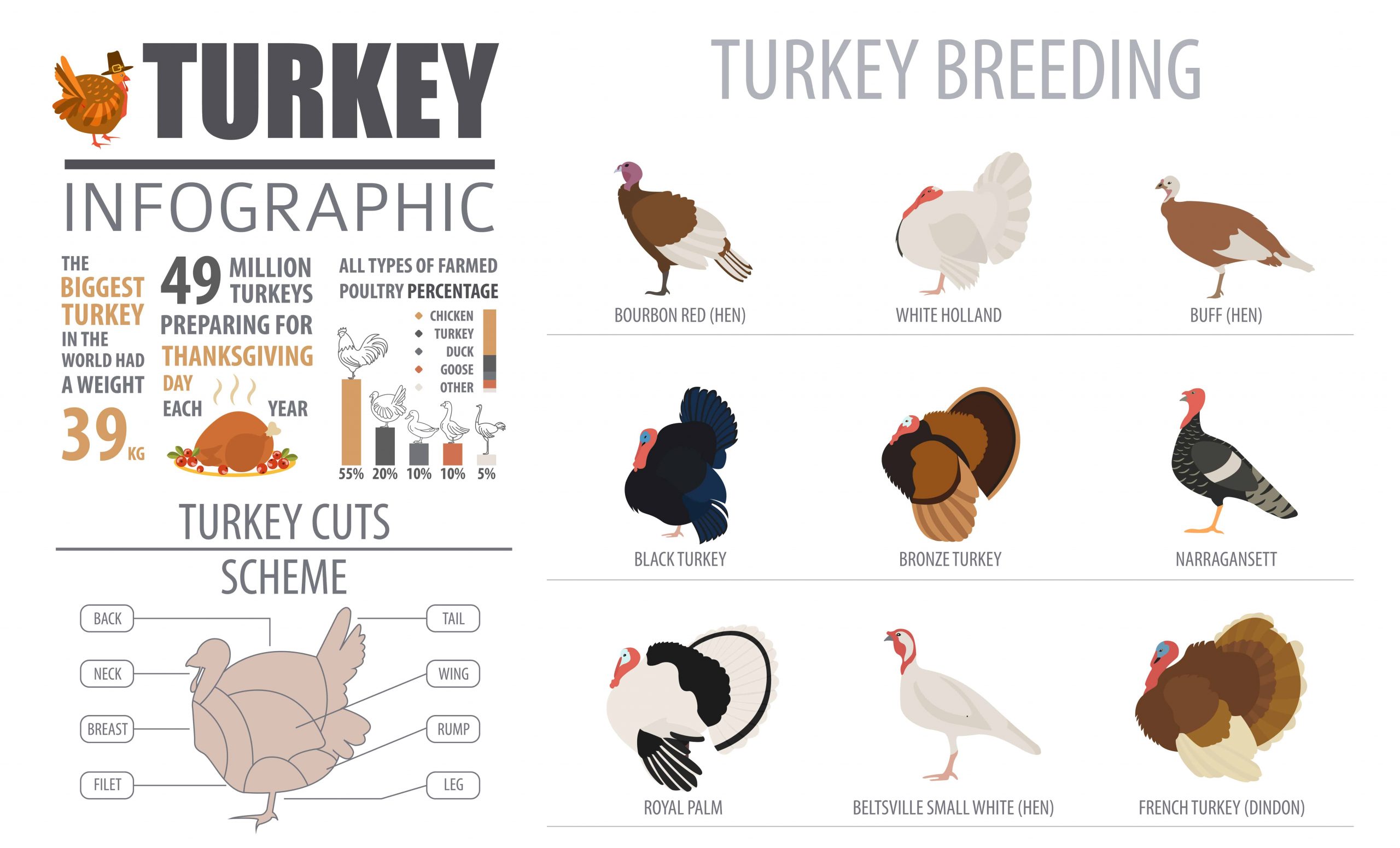 Can They Hurt You

Wild turkeys found in the urban areas have become accustomed to human-associated foods and may have lost their fear of humans and people. They may try to dominate people and may cause damages. The bold and aggressive turkeys can be threatened or scared with loud noises or spraying water through a hose. Dogs may also be used as a means of effective deterrent.

Wild turkeys can feed on natural food, and they do not require human handouts. Because an aggressive Turkey may become even bolder, they may sometimes need to be destructed. To avoid destroying them, do not provide them any food and keep them wild.

Wild Turkeys are the real ancestors of domestic turkeys. The upland ground bird is found in North America and is native to the region. They can be found in the orchards, fields, pastures, marshes, and the hardwood and mixed-conifer forests. They use the open spaces to find their food, which is often composed of insects, leaves, nuts, and seeds. The bird had become nearly extinct during the 1930s. However, they are back in massive numbers due to the reintroduction efforts, and can also be found invading the urban and suburban areas.

What Is A Wild Turkey Group Called

A group of wild turkeys is known by the name flock or “rafter”. The gobble of a wild turkey can be heard up to 1 mile away. It is a means through which a male turkey (Tom) may communicate with a female turkey (Harem). Turkeys may often roost in the trees, during nighttime. They fly up to the trees during the daytime when they seek protection. At nighttime, they fly down. When they are on the ground during the daytime, they are looking out for food.

Can You Eat Them

All turkeys were wild at a time. It is entirely possible to cook and eat a wild Turkey. Because they may have tougher meat, cooking it may take more time. Another aspect of meat obtained from turkeys is that it has less moisture (is dryer) when compared to other kinds of meat. Therefore, if you do not like dry meat, you should refrain from consuming wild turkey meat.

The best or the tenderest part of wild turkey meat is breast meat. However, legs and thighs should be preferred when you are looking for a flavor. The deliciousness of the meat can be further enhanced by the use of herbs and spices. Wild turkey can be cooked deliciously when combined with spices including white wine, black pepper, and Rosemary. Lemon juice may also be used.

Wild turkey meat does not have any added growth hormones, genetic adjustments, or preservatives. It may be better than the domestic and white turkey in its purity and health benefits.

It may be important to know more about the various subspecies of wild turkeys and the regions and areas where they are found. When you are hunting, it is good to know what you may face and what is coming. For instance, different wild turkeys may respond differently to calls and how they gobble.

Deer like having them around to watch for predators.