The 20 armadillo species are divided into eight genera, which make up the Dasypodidae order. The types you commonly see include the following: 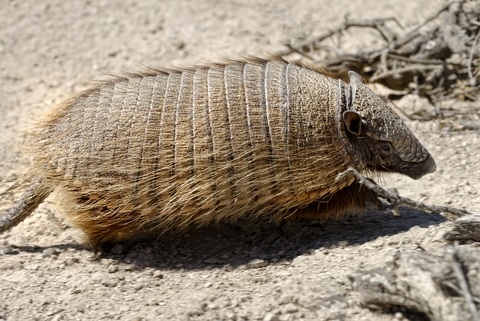 Also known as the dwarf or pygmy armadillo, these little creatures are native to Argentina and the only of their kind able to hibernate. They usually get up to 15 inches long from head to tail and weighs between 700 and 1500 grams when fully grown. These little mammals’ body color ranges from pale yellow to black and has a carapace that consists of the heavy scapula and pelvic shields. These pelvic shields have osteoderms that are rectangular shaped, separated by six movable bands.

Like most of their kind, they’re omnivorous as they savor insects and numerous plant materials. They use this food to build fat reserves to withstand long periods of hunger when they hibernate. Being diurnal mammals, Pichi armadillos spend their day feeding but dig burrows in sandy soils for shelter at night or during extreme weather. 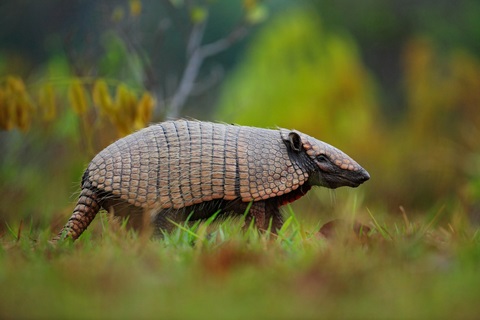 This armadillo species are found in the Southern Mexico Chiapa region, Venezuela, and Ecuador in the undisturbed tropical dry and moderately moist forests. They’re about 13 to 17 inches when fully grown and weigh between 2000 and 32000 grams when fully grown. Their carapaces are usually dark grey to tanned brown, having a pale-yellow strip towards their lower margins. They also have about ten bands which makes them overly flexible.

Naked-tailed armadillos are insectivorous and prefer feeding on ants and termites. They love spending their time underground, although they come out during the day to feed and find mates, wary of their predators. When captured, they make gurgling sounds, defecate and urinate to lure off their captors, and this defensive mechanism works well for them.

Typically known as the Burmeister’s or Chacoan fairy armadillo, this species is native to Bolivia, Argentina and Paraguay. They live among the subtropical grasslands or dry shrubland in semi-arid niches. Fully grown adults measure between 6 and 9 inches long from head to tail and weigh up to 1000 grams. Their carapaces have their bands fused to the spine and pelvis linked together by skin, enabling flexibility.

The greater fairy armadillo is omnivorous and feeds on a variety of small insects and snails and seeds and roots. They also detest spending their time above the ground and will quickly burrow when they taste any presence of threats in the air.

These species are the smallest among the armadillos, and their beauty is irresistible as well. They are native to Argentina, but a few others can be found in Rio Negro, the Mendoza Province, and the Buenos Aires regions. They’re nocturnal mammals who’re satisfied with their solitary lives in the scrubby grasslands having thin Portulaca shrubs. These tiny mammals measure between 3 and 5 inches and weigh just 120 grams. Their reclusive ways of living make them the most little-known armadillo species.

Pink fairy armadillos are generalist insectivores and don’t rely solely on ants and larvae. They also feed on snails, worms, and numerous insects, making them intelligent survivors overall. They also prefer living in burrows, mostly coming out at night to feed and mate. 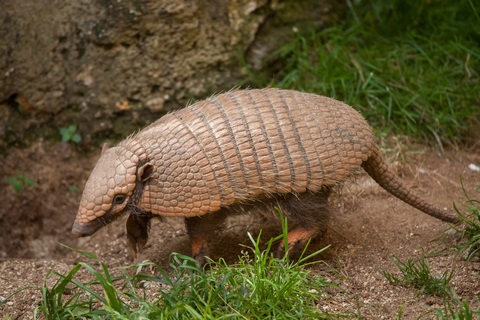 Also, as the natives call them – Yellow armadillos – this species is predominant in the South American continent compared to the other species. They measure between 16 and 21 inches long and weigh between 3000 and 6500 grams when they’re fully mature. Their carapaces are usually pale yellow, but some can appear brown to reddish-brown.

This armadillo species are typically omnivorous and love feeding small insects, ants, snails, fruits, tubers, and palm nuts. When they’re attacked or sense danger, they usually flee or try to bite their enemies when captured. 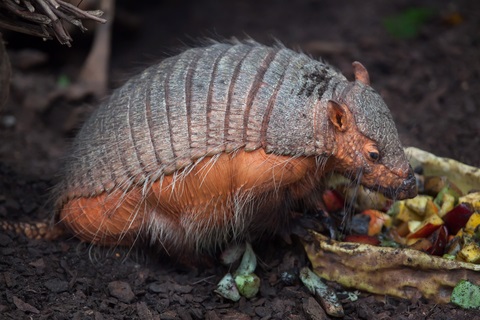 The nine-banded or long-snouted armadillo (Dasypus novemcinctus), which has anything between seven to eleven armor plates, is the only one whose habitat stretches into the United States. It can be found from the southeast United States to Peru and Uruguay, as well as on Grenada, Trinidad, and Tobago in the Caribbean. The long-snout armadillo is among seven species in the Dasypus genus, which has extended proboscis and little hair on all except one of its members. The furry long-nosed armadillo (Dasypus pilosus) of the southwestern Peruvian highlands is an oddity. 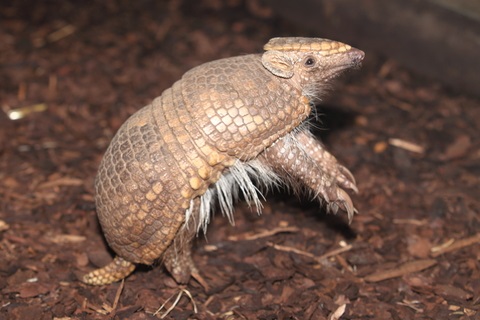 The enigmatic gigantic armadillo (Priodontes maximus) is the biggest armadillo, measuring 39 inches long and weighing 132 pounds. There are up to 100 teeth on it. Venezuela, the Guianas, Brazil, Paraguay, and Argentina are all included in its habitat. The Amazon rain forest, pastures, and forests are home to the species. The enormous armadillo, regardless of its size, is a burrow-digger that consumes insects and ants.

Not all armadillos can cocoon themselves in their coats, contrary to common perception. Only the tri-banded armadillo can do this, folding its head and hind paws and twisting its shell into a tough ball that confuses attackers.

The name of the shrieking hairy armadillo comes from the noise it makes when it is attacked. But don’t be fooled into thinking they’re cowardly. Snakes have been reported to be killed by throwing their bodies on top of them and slicing them with the jagged corners of their casings.

The state’s official animal of Texas is the nine-banded armadillo.

Armadillos come in a variety of colors. Their colors include pink, yellow, black, gray, and red.

Armadillos are frequently used in leprosy research. The bacteria that induces leprosy is vulnerable to armadillos, making them suitable test animals for leprosy studies.

Some individuals claim that eating armadillos tastes like eating pork.

Insects and their larvae account for more than 90% of the armadillo’s diet. Earthworms, scorpions, spiders, and other invertebrates are also eaten by armadillos.

The animal has been observed eating berries and sensitive roots under leaf mold, as well as maggots and pupae in rotting flesh. Skunks, lizards, tiny frogs, and snakes, as well as their eggs, are among the vertebrates eaten by armadillos to a lesser degree.

Armadillos are burrowing professionals, using their tiny legs with curved, sharp claws to dig their tunnels like a rodent. Armadillos use their enormous claws to dig additional tunnels when they are not resting, but not to create their nests: here is where they locate a plentiful supply of insects such as ants and termites.

Their large, sticky tongue is their most effective technique for removing insects from their tunnels. Because their eyesight is limited, they rely on their keen ability to smell to locate sustenance.

Its principal predators are mankind, who hunt it mostly for its meat and carapace. Other than people, armadillos have few natural predators, although in areas where these predators exist, armadillos have been caught and killed by foxes, dogs, bears, cougars, coyotes, and raccoons. Young armadillos may be preyed upon by owls, hawks, and feral pigs. In many locations, individuals and highways are major causes of death.

Armadillos love to live close to rivers, but they avoid areas that are too wet or too dry. Because of their digging, soil type is crucial. They love soils that are gritty or clayey. Pine trees, oak woodlands, grass plains, salt marshes, and seaside dunes are all home to armadillos.

Grassland, cemeteries, playgrounds, golf courses, plant gardens, and crop areas are all examples of human-made ecosystems that armadillos thrive in. They also scavenge along the sidelines of roadways. Sometimes armadillos will make nests out of dried grass rather than digging a hole. These nests mimic miniature haystacks and are commonly seen in moist soil locations.

Armadillo is a Spanish name that means little armored one, and it alludes to the bony plates that coat most of these strange-looking critters’ backs, heads, legs, and tails. They are the only existing mammals who have shells like this.

Armadillos are primarily prevalent in South and Central America’s tropical and subtropical regions. The majority of the 20 species may be found in open places such as meadows, but some can also be found in woodlands. The shell is a series of bones that protects almost all of the torso of armadillos, including head, legs, and tail for most species.

The shell is almost bald in all except for one species. The exoskeleton is made up of bony longitudinal bars that are clad in strong skin-derived scales.

Armadillos are peaceful creatures. They do not bite because they have tiny jaws and little peg-like teeth for crunching. The armadillo is a wild mammal that is not violent.