How Venomous is a Coral Snake vs Mimics and Others

Coral snake bites are highly venomous and can result in serious neurotoxicity which paralyzes the breathing muscles.

Coral snake bites are infrequent in comparison to pit viper bites(rattlesnakes) and account for approximately 2% of snake bites reported to US Poison Centers each year, about 30 per year in the US. They are naturally reclusive and rarely bite unless provoked or threatened.

Some coral snakes are also equipped with two fangs for delivering venom. The average amount of venom produced by the North American corals is around 25mg to 40mg, but some species can have up to 70-110mg in one bite.

This amount of venom delivered by the snake will lead to severe pain and swelling, numbness or tingling of the mouth and face, dizziness, nausea, paralysis and eventually heart failure.

Can coral snake bite kill you

Although the neurotoxic venom produced by the corals is usually not very potent, it can still cause serious complications. The severity of the symptoms depends on the species of coral snake and also on the location where it bites. If a coral snake bites in an extremity, such as a hand or leg, the venom may not be very concentrated and cause a milder reaction. However, a bite in a vital part of the body such as the neck or chest area will most likely lead to severe complications and even death.

If a coral snake bites you, it is essential to seek medical attention immediately. It would help to remember exactly what happened before the bite and how long it took for the symptoms to appear. Record the time of the bite so medical staff can estimate how much venom was injected and monitor your condition closely.

Can a coral snake kill a dog?

Coral snakes are usually not very aggressive, but they can be dangerous to dogs because most of them have small mouths. The smallmouth size will prevent the snake from injecting enough venom to cause severe problems in larger animals such as humans and dogs. However, it is important to get your pet to the veterinarian as soon as possible after the bite, because if the snake had bitten an extremity it might take some time for symptoms of poisoning to appear.

The neurotoxic venom produced by the coral snakes is fast-acting and will cause progressive paralysis throughout the body if not treated immediately. If a coral snake has bitten you or your pet, go to the doctor immediately. The doctor will start with basic first aid procedures, including washing the wound with soap and water, followed by a pressure bandage. If the bite occurred on an extremity, keeping the limb elevated above the heart is recommended to ensure that the venom spreads throughout the body as slowly as possible.

If a coral snake bites you, it is crucial to receive medical attention immediately. The doctor will apply pressure on the wound, which should be done for 10-15 minutes to reduce the blood flow and prevent the rapid spread of venom through your body. If the bite occurred on a limb, make sure to keep it immobilized with a splint or sling and avoid using it until swelling has gone down completely. Try to remember if the snake was possibly rabid and seek medical attention immediately if there is any possibility of rabies transmission.

Is there anti-venom for coral snake bite

There is currently no antivenin available for coral snakes, but there are ways to treat the symptoms.

Coral snakes are small with sharp teeth, which results in deep puncture wounds that bleed profusely. The venom will cause extreme pain and swelling at the wound site within 5-20 minutes of being bitten. The marks around the bite are commonly referred to as “bands” and are what you would look for when identifying a coral snake.

Coral snake vs other snake venoms

When it comes to venomous snakes, there are several species that their markings can identify. The three most common types of venomous snakes in the US include rattlesnakes, copperheads and cottonmouths (also known as water moccasins). These species all have triangular-shaped heads, so they can easily be distinguished from non-venomous snakes.

The coral snake, which has round markings with black coloring touching red, cannot be distinguished from a venomless species very quickly. Many people are bitten because they think that an insect is a snake or vice versa. The best way to avoid being bitten by any snake, whether venomous or otherwise, is to leave it alone. 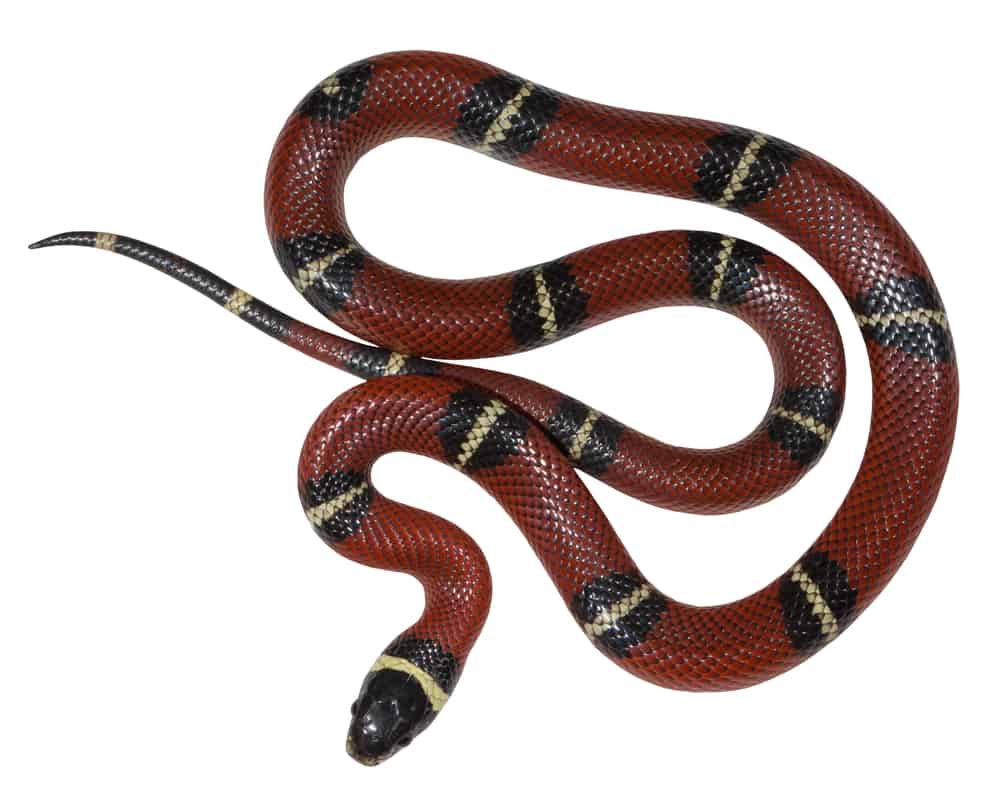 Although the milk snake has a few distinct subspecies, the majority of them have striking black, red, and white banding along with their bodies. Milk snakes are nocturnal and most frequently encountered on the ground. Milk snakes, like all snakes, are predominantly carnivorous and feed on a range of tiny animals. These snakes are opportunistic feeders, capable of consuming anything from insects to rodents. 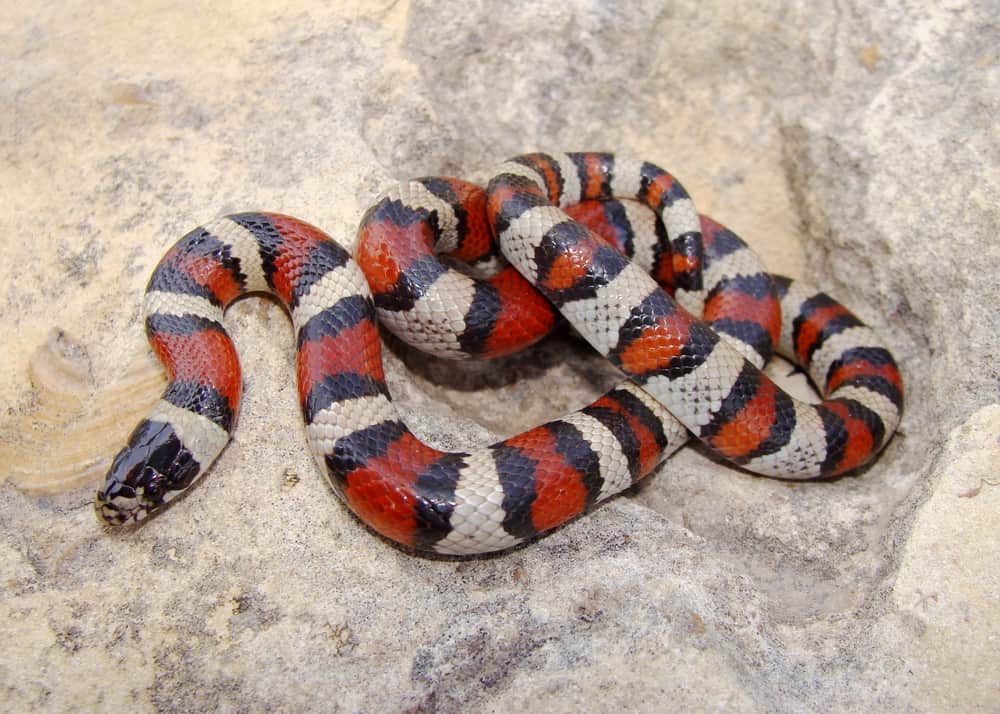 Coral snakes can be distinguished by their yellow bands, which always touch the red bands on their backs, whereas milk snakes always have black bands adjacent to red bands.

Coral snakes are small and brightly colored, and bite with fangs that inject venom. They have the second most dangerous venom. However, coral snakes are considered less hazardous since they have a less effective poison delivery system. Coral snakes are slender and small, with a length of 45 to 50 centimeters. The snakes have a bulbous head and a rounded nose that looks similar to the tail, and it can be challenging to differentiate the head from the tail.

Mimics are those non-venomous snakes that protect themselves from predators by imitating a dangerous species. The problem with mimics is that the rhyme is unreliable due to the fact amount of color and patterns variation. The harmless common snake mimic and display four striking colors patterns that closely resemble the most dangerous snake with red, black and yellow counterpart. 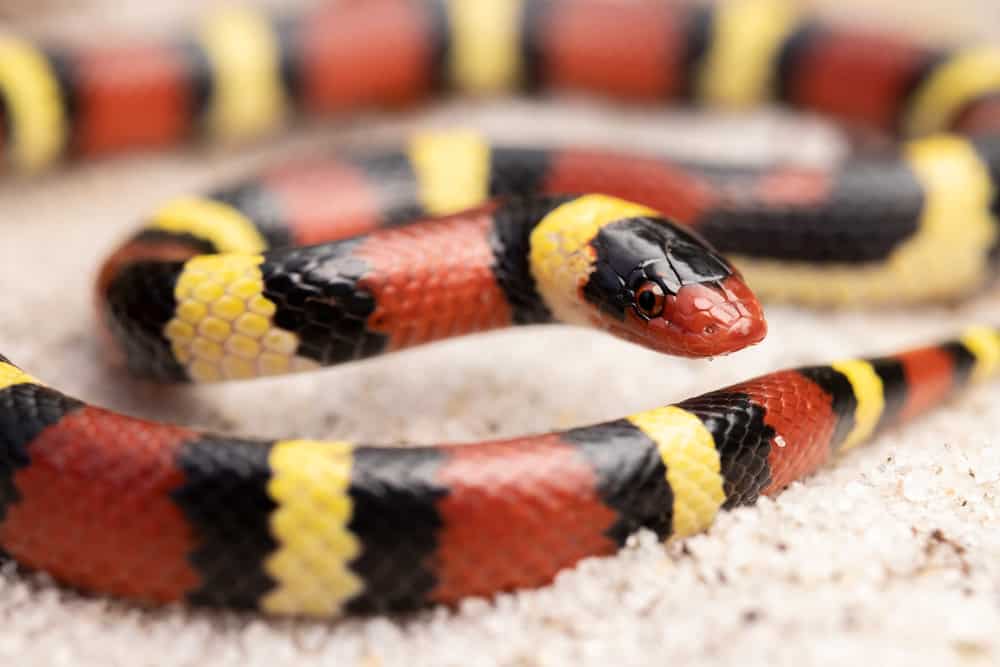 Scarlet kingsnakes have better mimics and this has a significant effect on the prediction rates. It is not easy to differential the scarlet kingsnake. One needs to be very careful and keen on their bands. Additionally, scarlet kingsnakes are considerably smaller and have a length of between 14- 20 inches.

Florida scarlet snake is a non-venomous snake from the Columbidae family. The snake can grow up to a length of 20 inches. Most of these types of snakes have red blotches and black ones bordering them. At times they can have white and gray smooth scales. There are also black lines that connect their body. The Florida scarlet snake can be mistaken with the red milk snake or the scarlet kingsnake.

Red milk snakes are non-venomous snakes that have to possess traverse of red, yellow and black. The snake ranges between 16 to 69 inches. Additionally, we have a tri-colored snake that is nonpoisonous, know as the Sonoran shovel. It is a tiny yellow snake with alternating black and red saddle-shaped band.

The major differentiating factor is the band’s color in the skin of these snakes. The scarlet kingsnake has a yellow band, whereases the Florida snake has white bands.

The difference is evident with the red milk because they have a slightly upturned nose, and the head is red.

The most exciting part is that people believe that scarlet snakes are dangerous since they resemble coral snakes. The significant difference is that coral snakes shoot venom that can cause death to human beings.

The majority of the world’s snakes are classified as clinically non-venomous. This means they do not create a toxin that is harmful to humans. However, several snakes that are considered harmless to humans, such as Hognose snakes, Garter snakes, and Rat snakes, do release toxins that are harmful to their prey.

There are no universally recognized characteristics that distinguish venomous from non-venomous snakes. Individuals must understand the dangerous snake species found in their area or in areas they intend to visit.

Venomous snakes, in general, have elliptical pupils and one row of scales on the underside of their tail. Pit vipers (all of which are deadly) have a pit in the middle of their nose and eyes.

Snakes that are not venomous have round pupils and two rows of scales on the underside of their tails. Snakes that are not poisonous inflict no direct harm to persons, structures, or pets. These snakes contribute to the management of local pest and rodent populations.

Certain nonvenomous snakes consume other snakes, including poisonous ones. Snakes occasionally penetrate buildings and other structures in search of shelter or food, which can make residents feel anxious.