What Kind of Turtles Live in Alabama? (9 Pictures, Descriptions)

Alabama has more than 30 different species of turtles and each of them comes with its specific quirks and looks, such as: 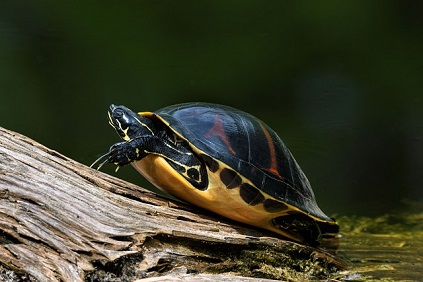 Also known as Alabama’s State Reptile, these turtles come with a high reputation and simple habits. They are basically pond turtles with shells in almost all colors ranging from green to darker shades of brown and yellow.

One of the biggest highlights of these reptiles is their beautiful skin that features striking yellow stripes. These stripes serve as an excellent contrast to their otherwise yellowish skin.

Unlike several other turtles, these reptiles also come with stripes right up to the face. These patterns and stripes, however, tend to fade away as these turtles grow older.

The female Red-bellied turtle assumes a larger size than their male counterparts. However, this is the only major and relevant difference between the two.

Both the male and female red-bellied tend to spend their time in isolation. They enjoy the sun, but only when they are uninterrupted and completely isolated. If they feel the minutest sense of threat, they will immediately retreat right back into the pond or swap.

If you are planning to check these turtles out, avoid disturbing them in any way. The diets of these turtles are fairly simple, and they usually thrive on weed and grass.

If you are looking to find them, check the shallow ponds, swamps, and rivers. Because these turtles thrive best in vegetated water bodies, you are most likely to find them in a swamp or a pond that is teeming with weeds and underwater plants. 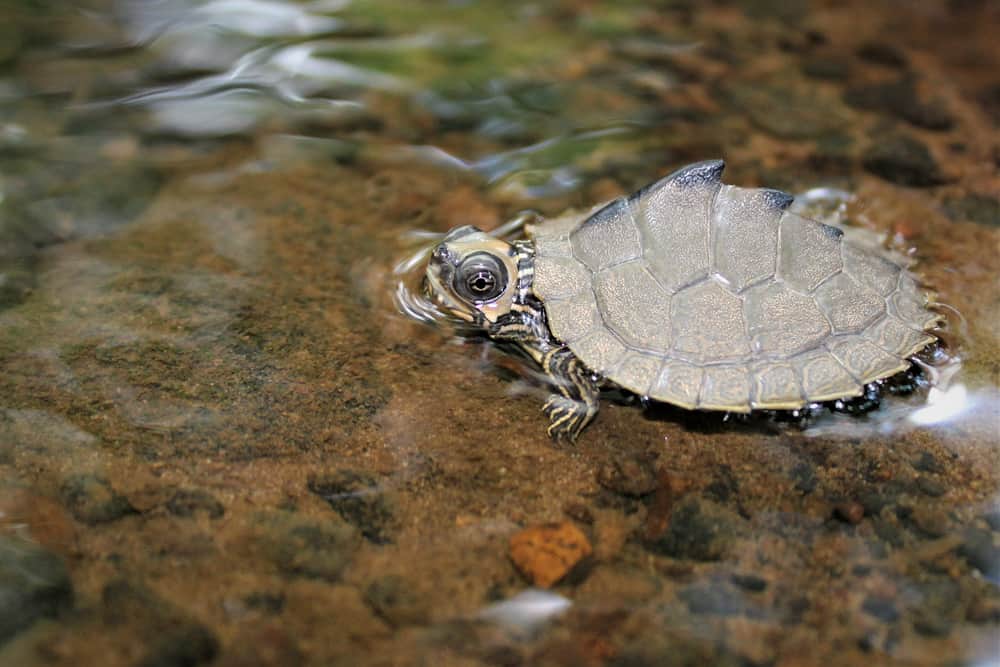 This is one of the prettiest turtles to be featured on our list. As evident at the outset, these turtles derive their name from the Alabama Map because of their striking resemblance to the same.

Their key takeaway is the patterns on their shells which also resemble the maps. As with the Red-bellied species, these map-like patterns and marks tend to fade away as the reptiles age.

In stark contrast to the upper part of the shell which usually takes a greenish or brownish hue, the lower part of these turtle shells is typically yellow. You will find other signs of yellow, especially on their skin, which is marked by strong lines in yellowish hues.

The typical lifespan of the Alabama map is between 30 and 50 years. As with the Red Bellied turtles, the males are slightly smaller (only three to five inches) as compared to their female counterparts that assume lofty sizes between eight and 10 inches.

These turtles are found abundantly in Alabama and you are especially likely to get them in waters that are either stagnant or moving really slow. They prefer vegetation, so you might also find them around streams or waterfalls that are usually shallow and weedy.

Despite their preference of staying in vegetated streams and water, these turtles aren’t herbivores. Instead, they consume everything from meat, fruits, fish, and even tiny land and sea insects. These are the kind of turtles that will consume everything in their sight as long as it’s smaller and consumable. 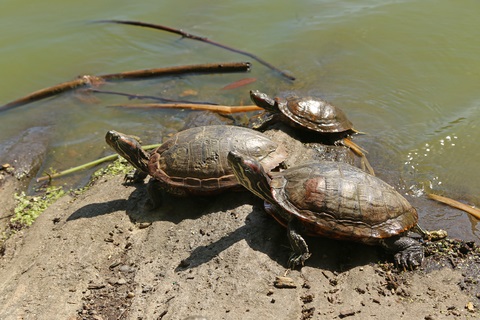 With three different subspecies, this is yet another iconic turtle that is best known for its thick tails. Like the other turtles listed here, male pond sliders are slightly smaller than females. When young, you will find these turtles with shiny green shells.

Their skin though has a yellowish and dark greenish hue. Both the skin color and the marks of the turtle shells tend to fade as they start aging. The easiest way to identify their age is by checking their skin color. If it is black or at least close to black, there’s a high chance that the turtle is extremely old.

Although the patterns fade, most of the lines around their head, a portion of the neck, and tiny legs continue to be constant.

You will find Pond sliders in any and every type of water that is slow-moving. This includes ponds, streams, rivers, or any kind of slow-moving lake. In their original habitat, they prefer living in a soft cushion of mud with tons of vegetation.

The unique aspect of these turtles is perhaps their eating habits. When young, these turtles have no inhibitions to consuming meat. However, as they start aging, they switch to healthier and vegetarian choices. Older turtles usually consume weed, leaves, and other vegetative parts. 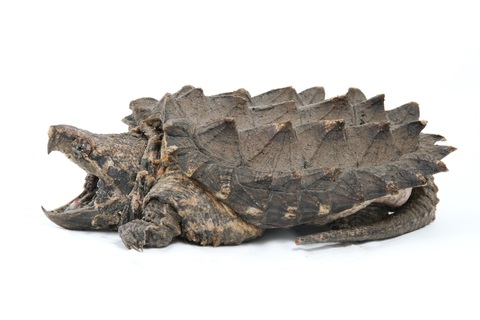 With a vulnerable conservation status, the Alligator Snapping Turtle is almost on the verge of extinction. Their original colors are typically black and brownish and at the outset, they will appear extremely spiky.

This is primarily attributed to the evident and protruding spikes on their shell. Interestingly, these spikes aren’t as sharp as you would otherwise assume. That is also the reason why they are named after Alligators.

The typical lifespan of the Alligator turtles would be 60 years. However, in some exceptional cases, they can also live until 70. Their size is perhaps the biggest among all the listed turtles. Typically, these turtles are around 15 to 30 inches.

You will find these turtles at swaps and ponds, regardless of the vegetation. Unlike other turtles who prefer staying up, the Alligators enjoy maximum time at the bottom of the waterbody they call their homes.

Most of these turtles are moderately active. Although they are known to be predators, they aren’t quite active in their predatory habits. Most of the time, they end up catching their prey by patiently waiting at the bottom of their inhabiting waterbody. They keep their mouths open so that the prey falls directly in them. 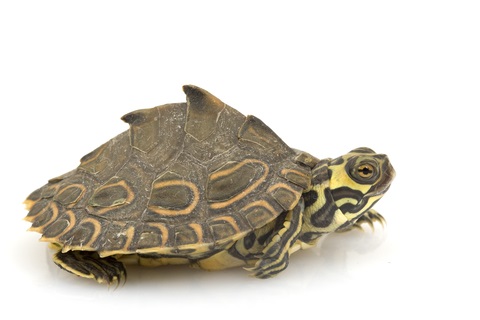 Deriving their name from the map-like patterns on their back, these turtles come with brownish to blackish skin. This is in significant contrast to the other marks on their body which are either green or in the shade of yellow and brown.

You will find the most unique aspect of these turtles right at the top of their shell: their spine. Unlike any other reptile, they come spines that are further marked by an extremely black tip. With that said, these spines do not have any uniform length and can differ depending on the turtle.

The Barbour’s Map Turtle doesn’t come with an impressive lifespan and their average lifespan ranges in the 30-year window. In some cases, they can live up to 50 or more years. Like several other turtles listed here, the male turtles only assume a length of three to a maximum of five inches, as compared to the eight to 10 inches body of females.

In Alabama, you will find them abundantly in all slow-moving waters with plenty of seaweed. In some cases, you may even happen to spot them at a lake or a swap. Their usual diet includes everything under the sun from meat to insects, to seaweed, and even fruit. Despite the apparent diversity in food habits, these turtles usually prefer underwater vegetation.

These turtles also have several reproduction cycles that begin from spring and can last until the last couple of months during summer. 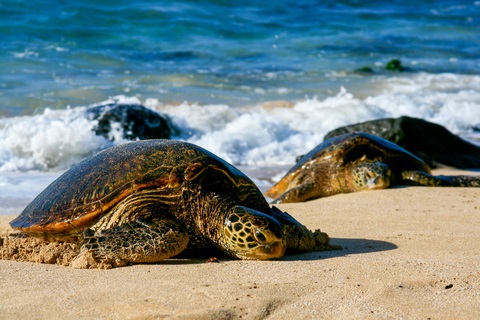 Green Sea Turtles might sound pretty, but unfortunately, these turtles come with the highest level of conservation concern because they are on the verge of being endangered. You will primarily find these turtles nesting in the natural swamps of Alabama and very few of them are found in specific water beds. These turtles prefer staying submerged, so shallow waters, are their call. They also thrive on grass beds underwater. The defining point of Green Sea turtles is their weight which can go up to a whopping 300 pounds.

Despite these many interesting characteristics, it is rare to spot them because the U.S Fish and Wildlife Department already declared them endangered way back during the late nineties. 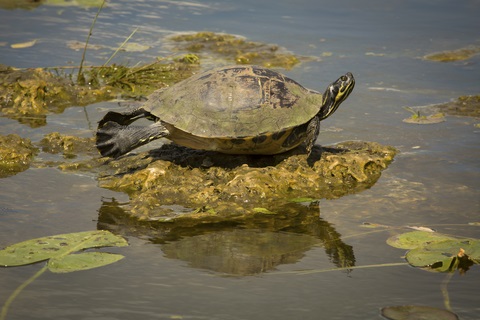 These turtles have a moderate size and they typically thrive on seaweed and other sources of underwater vegetation. 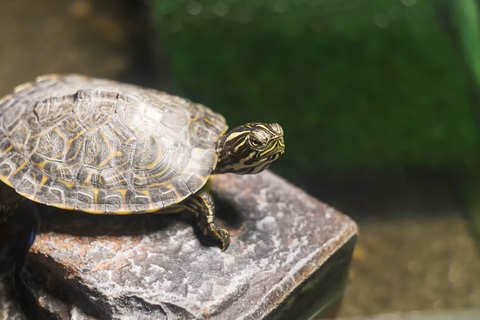 This is yet another iconic Alabama turtle that prefers to spend its time in solitary confinement. As with the Red-bellied species, you might often find these turtles enjoying their solitary time along the sun. They are friends with Painted turtles and the Red-bellied turtles, and the three species are often found hanging out together in the sun.

Contrary to most turtles, River Scooters are super-fast, and this is regardless of the location. Their speed remains unaffected whether they are on land or are swimming away in the water. While their primary habitat would be any shallow swamp, you might also find them in Brackish waterbodies. 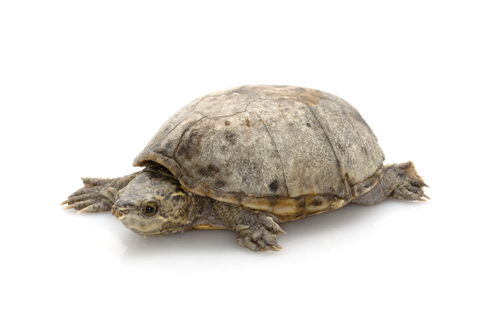 These are one of those turtles that are abundantly found in all corners of Alabama. They do not look quite special and have a fairly plain appearance. The colors, however, are highly consistent.

This further contributes to the plainness and simplicity. In the most common scenarios, you will find these turtles with the same skin color as their shell. Interestingly enough, you will also find ridges on the shell that cover the entire part of the shell. So, the shell is covered by the ridge and the head has something unique as well. Although it may not appear at the outset, these turtles don two tiny and extremely light stripes right above their heads.

Both male and female species of these turtles are fairly small with a size of only 3 to 4.5 inches. Their average lifespan, however, can last up to 50 years, with 30 years being the minimum parameter. In case you’re wondering where to find them, just head to any slow or stagnant water body. Typically, these turtles thrive best in waters that come with a soft lower part.

These turtles consume meat and are often seen preying on fishes and other aquatic animals. They also, however, enjoy their fair share of plants, leaves, and/or fruits. Like several types of turtles, the Common Musk usually easts everything.

The nesting season of these turtles is fairly reasonable and ranges from May to August. On average, they lay 75 eggs.

Visit the Yellowhammer State to check out the wonderful range of turtles and other reptiles. The turtles in particular are sure to grab your attention with their beautiful skin and shiny shells.